The theme for this year’s international women’s day was #eachforequal to celebrate the radical idea that women and men are equal.

We have a long way to go to achieve true equality but there’s reason to celebrate progress and use it as a road map to make even more gains in gender equality. 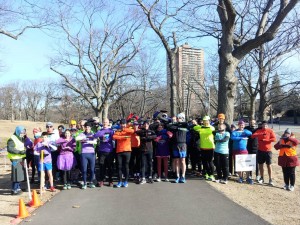 Women were once thought not to be able to run more than 800 meters because it was not feminine and would cause our uterus to fall out. Well, we have learned that our uterus does not in fact fall out, and we don’t have to let men define femininity for us, we can define it however we like. And for me, I feel like finishing a 5K or a marathon is incredibly feminine, it is when I am most proud of my body and all it can do, and I am more concerned with what it can do than how pleasing the shape or appearance of it is to anyone else.

Women’s participation in running is increasing. A few days ago, the biggest field of women competed at the Olympic Marathon Trials, including our own Katie Kellner who crushed it. But there’s still a ways to go in the marathon. The men’s marathon is still more revered than the women’s and reserved for the last event of the Olympics. We still measure breaking huge running barriers based on the abilities of men (sub 4 mile, sub 2 marathon). If you google who has the American 10K record, you don’t get Galen Rupp AND Molly Huddle, you just get Galen. He is the owner of the 10k American record and Molly Huddle is the owner of the 10K Women’s record. We still qualify women’s achievements in a way we do not for men.

But more amazing things about women? Women dropped out of Boston 2018 at a lesser rate than men. Women were not deterred by difficult conditions, probably because we’ve encountered them before (its called history). And scientific studies show that women are better at pacing than men. Men are really talented at going out super hard and fading fast, and women are better at even pacing or running negative splits. 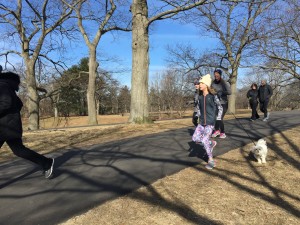 The takeaway is that women are excelling in an area we were previously excluded from. Katherine Switzer was notoriously chased off the Boston Marathon course in 1967 but today women make up 44% of the field at Boston. We need to take our advancements in the running community and learn from them by forcing our way into other areas where we have been historically excluded, like, for example, the Oval Office.

If doors are not automatically opening for you, run through them and force them open and leave it open for the next girl behind you.

Lastly, women are socialized to do all the work and take none of the credit. But ladies, when you’re celebrating all your strong female friends, be sure to brag about yourself also. Whether it’s a new 5k PB, or a promotion at work. Celebrate yourself as well! You deserve it.

Chrissie Connors
Run Director and person who cares deeply about elevating women to every level of every sector.