If the old adage of "April showers bring May flowers" is correct....we're sure in for a blooming and beautiful May! It was another rainy and windy day, but that didn't stop these fine folks from spending some time on the trail. 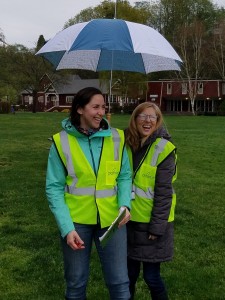 This weekend we saw 22 participants on the trail, 10 of which were first timers! Of our returners, 6 of you walked away with a PB (or personal best). Maybe there was a little extra motivation to get out of the rain

Along with our first timers, we had a visitor that came down from Seattle and another from across the pond in London! I love seeing how parkrun brings people from different corners of the world together!

In our local group news, we want to make sure to give a shout out to our own Anne Dahl who volunteered at DMC parkrun for the 25th time this weekend, earning herself into the volunteer milestone club. Congrats, Anne! 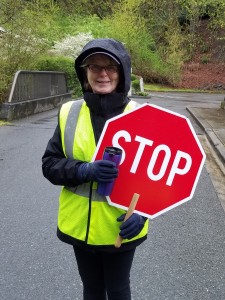 We also encourage you to keep an eye out for info later this week for potential changes we may need to make for next weekend. Saturday, April 20th will be a busy day at the beach park with an extra special Easter-Egg hunt put on my the Des Moines Parks & Recreation, which will be happening at the same time as parkrun. We're not anticipating needing to make major changes and will definitely still hold parkrun, but may need to start further up the trail to accommodate the extra activity. Stay tuned!

Thanks to all of our volunteers this weekend to made our event possible. I'm looking at you: Traci Buxton, David Gallaway, Faith Young, Anne Dahl, Anna Hicks, Valerie Dodge, and Brian Hansen. A special thanks to Nancy Leveson for capturing the event in photos this weekend!

Have a great week everybody and see you on the trail!

Thanks, Mary Eun for serving as the Run Director and writing up this weekend's run report!

We had the privilege of singing Happy Birthday to celebrate Dave's 75th, which he celebrated by running with his kids and grandkids. As you can see from the pictures, Parkrun is a great way to spend time with family and to get to know your neighbors. 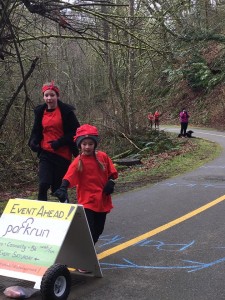 Thanks to Faith, Traci and Mary for the pictures today.  Thanks to our volunteers that make parkrun possible - Traci, Faith, Brian, Dave G, Casey, Mary, Anna, and Ann.

To see the rest of the today's photos, check our facebook page at:
https://www.facebook.com/DMCparkrun/

No longer summer, not quite fall.  These last days of bright sunshine and open skies are such a treasure!  This past weekend 20 local folks came out for an extra dose of vitamin D and parkrun-fun! 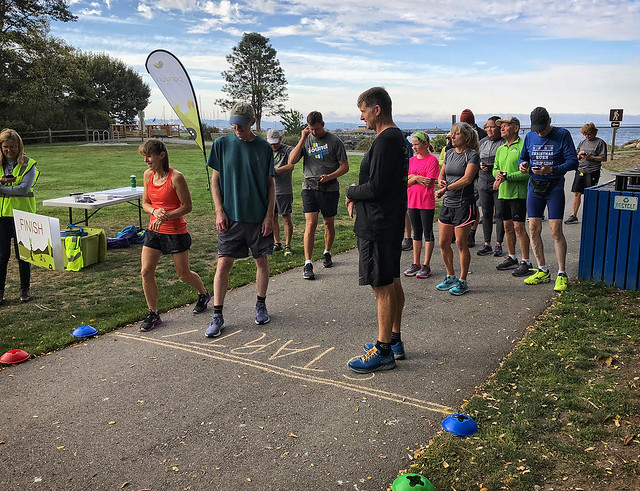 Thanks to everyone who came out to the park!  We had 3 personal bests (or PB's) and welcomed a couple of people from out of town that got up extra early to join us! 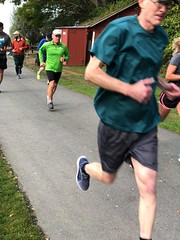 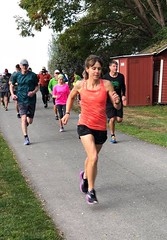 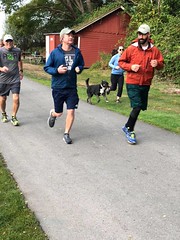 This week, Earl brought along a cowbell...because who couldn't use just a little more cowbell, amiright?  I love it :)  But what I love even more is that our little parkrun community needs no extra encouragement to stick around and rally the rest as they cross the line.  "No one finishes last in parkrun" is a phrase you'll hear across the parkrun spectrum.  It's true since it's our volunteer tail-walker that finishes the course making sure no one get's left behind. 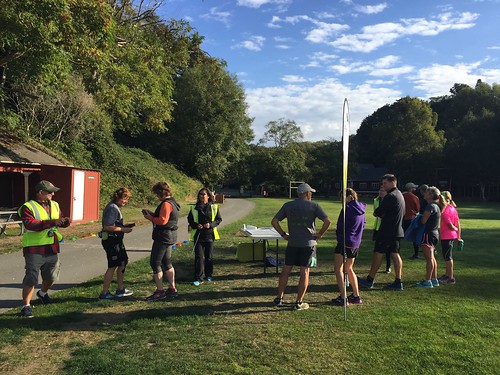 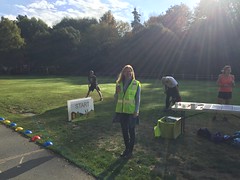 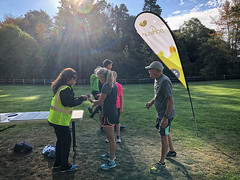 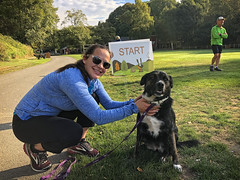 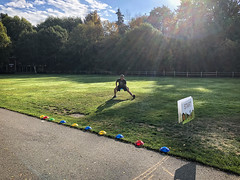 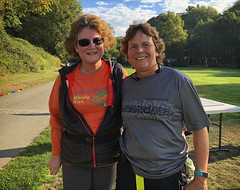 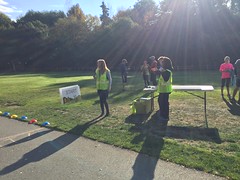 Speaking of tail-walkers, I'd like to give a shout out to this week's tail walker, John Davis, who has been volunteering in this role (amongst others) for a while now.  John is a friendly and kind soul who enjoys giving back to the community and those around him.  His passion for volunteering has led him around the world in various roles including working with organizations to help give glasses and vision care to those in need.  Thanks, John! 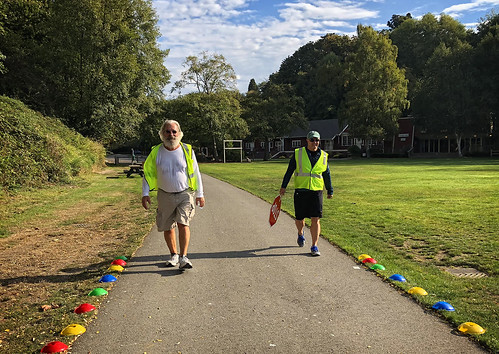 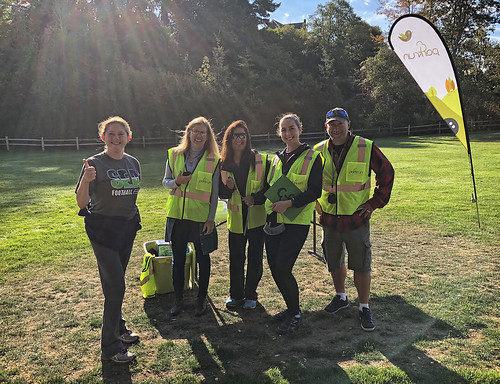 And thanks to the rest of our volunteers this week, too!  Anna Hicks, Traci Buxton, Matt Morgan, Faith Young, and Earl Harper, we couldn't have done it without your help!

See you on Saturday! 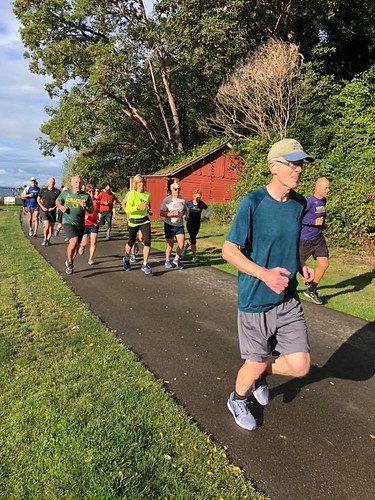 This report is written by one of your visitors on Saturday, Roderick Hoffman.  I'm a parkrun statistician so rather than say how wonderful the course and company was, though they were, I'm going to pour out a load of facts and figures. Most of the information below has been researched from the reports that are available from the parkrun.com website. 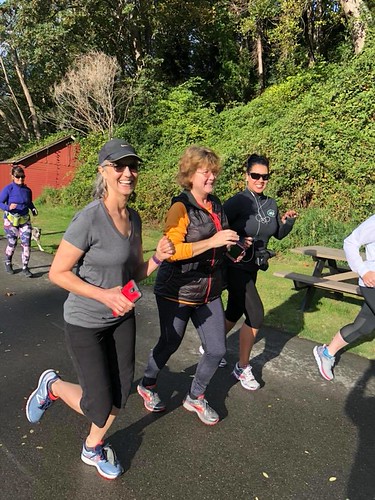 This was event number sixteen and the parkrun had 35 finishers. That is the highest number since the beginning of August.  Des Moines Creek has only had more finishers on three occasions and the highest ever was only three more than on Saturday with 38.

Over the sixteen runs 197 different runners have completed the course. This means that next week's third new finisher will be the 200th runner.

Just over half, 18, of Saturday's 35 finishers have only ever run at Des Moines Creek. Leading the way (at Saturday's run) was Ken ROGERS who has run here on nine of the 16 occasions since the parkrun started. I'll also mention Casey SKEEN who has had the most number of PBs - six in her eight runs and also Sean MILLER who may have only run four times but he has secured a PB on every occasion. I wonder how long Sean will keep that record going? In total he has knocked 89 seconds off his original time and I also note that he claims to belong to an appropriately named club - "Raise the Bar".

There were nine runners making their first visit to Des Moines Creek parkrun. At the briefing two people claimed to be doing their first ever parkrun but the results do not show them - they are probably two of the six finishers who were unable to present a barcode to be scanned and so don’t have their times in the results.  The message to the new runners is to go into the website, register yourself and print off your barcode for next time - don't use "not having access to a printer on Friday evening" as an excuse…Steve!

Of the 20 runners who were running for a second or multiple time at Des Moines Creek parkrun an impressive eight secured new PBs and the other 12 completed another run and in doing so beat everyone who stayed in bed. 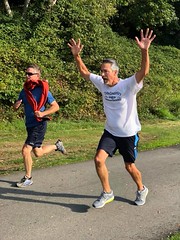 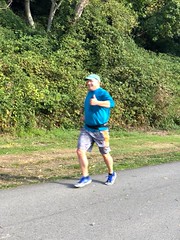 In my view David FROST's achievement eclipses that of the two first place finishers. He achieved an age-grade result of 74.30% which was the highest on the day and also improves his own age grade record for his gender/age category, albeit by a single second!  The first placed finishers were Shawn DAILEY in 22:01 and Rebecca ALEXANDER in 22:10.  In both cases this was the fourth time each had achieved a first finish and I'll add that Rebecca was only five seconds behind her own ladies record for the course. Another ALEXANDER, Lucy, wasn't so quick - 40:52 but she was the youngest runner on the day, a JW10 (Junior Women aged 10 or below).  But then again perhaps Lucy was handicapped by having to remain at arm's length from David ALEXANDER.

Molly BROWN and Peter ERNST were amongst those doing their first run at Des Moines Creek. Both have recently been regulars at the sister parkrun at Renton though in previous years had been regular runners at Bushy parkrun in the UK. Faith YOUNG was another who has multiple Renton parkruns in her record though this was her third consecutive run at Des Moines Creek so I suspect she has migrated. 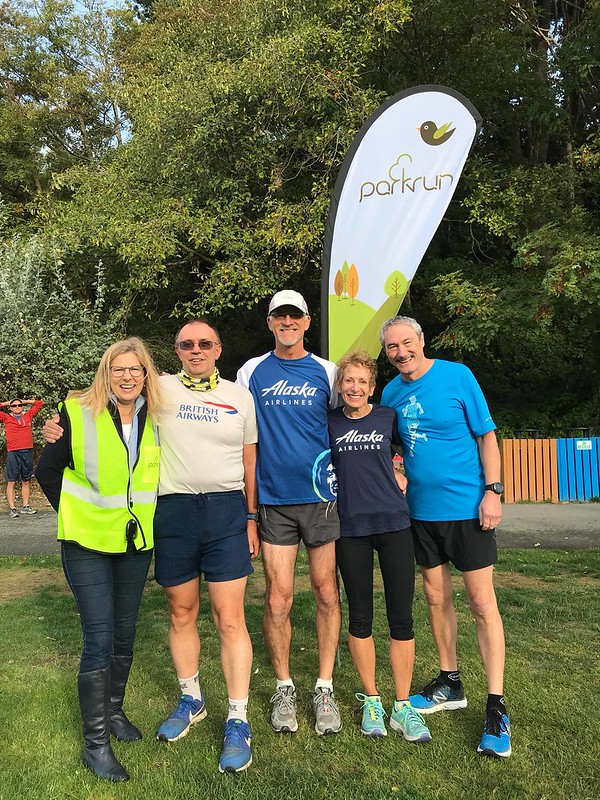 A mention for Gaylene DONNER and Brian DONNER.  This was the third parkrun for each and each had been at a different venue (Root44 in South Africa, Renton and now Des Moines Creek). I suspect that it will be difficult for them to continue their record of different parkrun venues - but I can tell them that if they make it up to 50 parkruns at 50 different venues then they qualify to join the "Hoffman Club" (named after me, though not by me).  Worldwide this exclusive club has only ever had 21 members to date. Perhaps a bigger achievement on the day was Gaylene setting a new age category record for her age group - improving the previous record by the equivalence of two minutes (3.13%).  David FROST and John PONTAROLO share the distinction of being the oldest participants on the day - though which is the elder, parkrun doesn't divulge. 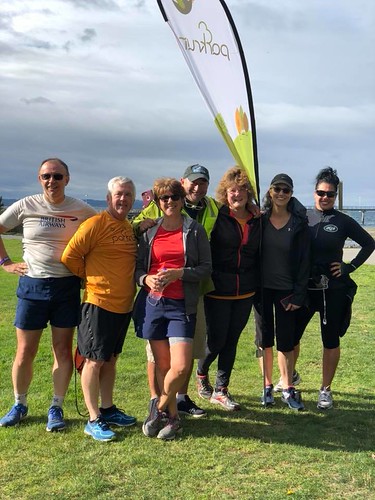 Chris HUDSON and Angela HUDSON had come all the way from Orpington in SE London, UK to run at this event. They are well travelled with Chris having run now at 93 different parkrun venues.  When he reaches 100 different venues he can claim to have completed a "Cowell". This is so named because the first to achieve this feat was Chris Cowell. Perhaps Chris will juggle venues about so as to achieve his 250th total parkrun on the same day as earning his Cowell - he is currently on an impressive 233 parkruns.

Bill POST and Frances POST had travelled from Clermont Waterfront parkrun in Florida. They are also well travelled and have done 23 different parkruns including parkruns in seven countries and 15 of the USA's 25 parkruns.

This was my fifth USA parkrun so I thought I'd finish by telling you a little bit about each of the others I've done, so what makes each different. This should even be of interest to the Bill and Francis POST since my US parkruns include three of those they have yet to run. 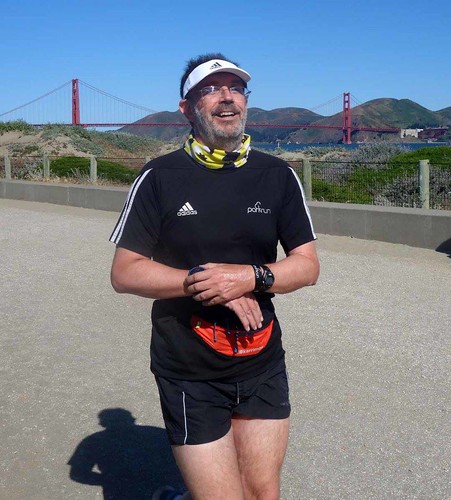 And I'll mention just one of the UK parkruns I've done - Ashton Court near Bristol. This has a similar profile to Des Moines Creek being 2.5km uphill to the turnaround and then 2.5km downhill to the finish. Ashton Court has a total of 100meters climb compared to that of Des Moines Creek with 65meters. So it is 50% steeper, nevertheless if you are near Bristol in the UK on a Saturday morning you should find that your regular parkrun practice should put you in good condition for Ashton Court - compared to other visitors who are usually more used to pancake flat parkruns. Oh, and when I say that all parkruns are the same, one of the things I mean is that they all accept the same barcode you use at Des Moines Creek to put your name into the results. Are you listening Steve?

What an eventful weekend in Des Moines!  This week 32 of you came out to run the trail before heading out to your pacific northwest summer adventures.  Thank you so much for making parkrun a part of your weekend!

Here are the stats from this weekend:

Of the 32 participants, almost half of you earned a PB (or personal best); 14 to be exact!  Consistency and comradery really does pay off!  Congratulations to our first female and male finishers of the run today:  Nancy Leveson & Shawn Dailey!  You are inspiring us and keeping us on our toes

On most days, the crossing guard position is a relatively quiet volunteering post.  But on the day of the Waterland Festival with festival workers busy getting set up for the event, Matt Morgan had his work cut out for him and actually got to use the stop sign!

Thanks are in order to Carrie Pizzano, Traci Buxton, Matt Morgan, Kathy Scott, Toby Hoekstra,and Aimee Herman for volunteering this weekend!  Also a big thanks to Mary Eun for taking some great photos of the event!  For more photos of this weekend event, check out our facebook page at:   https://www.facebook.com/DMCparkrun/