They say that when life gives you lemons, you should make lemonade.

This week life gave us ice. So that sounds like an invitation to eat ice cream, right?

At least, that’s the interpretation that Mika Sauerland chose in Berlin this week. And she figured, correctly, that she could persuade her mom Kazuko Yatsushiro to do an ice-cream run for CPVp. 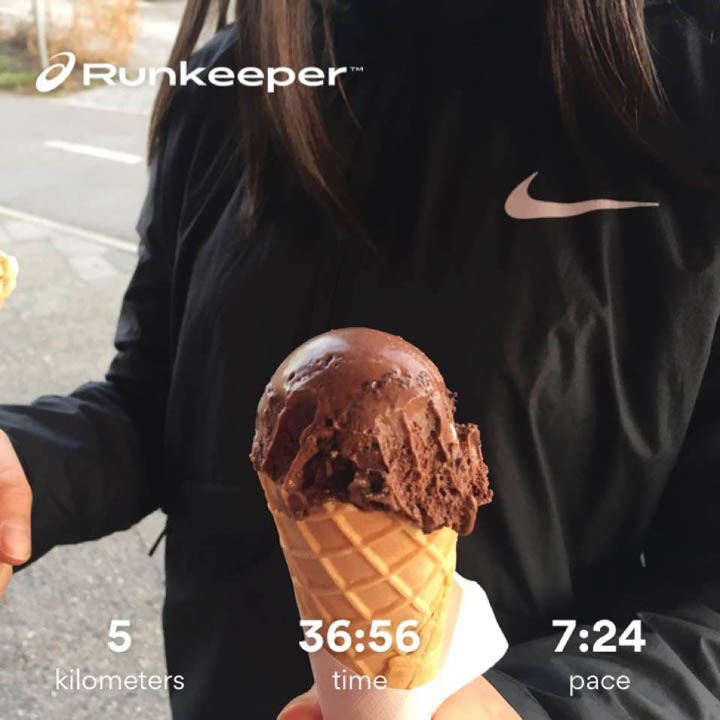 Meanwhile, the rest of us found plenty of ways to make the most of a Rather Icy Day, wherever we happened to be. Some were searching for clear roads or trails. Some were making the most of grippy shoe attachments. Some were indoors on the treadmill. Some got moving on XC skis. Some were “skating”. The common thread in all this is that you wanted to get moving.

FOR INFORMATION ON HOW CPVP WORKS SEE HERE

Stat(s) of the week: This week Tim Keer pointed out that this was the 50th Saturday since the last time we were able to come together for a regular in person event, on March 7th 2020.

That last in person event was 348 days ago. A person who had first joined us that day could have earned a 50 shirt by now. In fact, Frank Filteau took just 350 days from his first time with us until he earned his red 50 shirt.

We didn’t start the virtual events until the beginning of May (what were we thinking!). But there are some who have never joined us for an in person event who are on track to reach their 50th CPVp this spring.

Anne L’Ecuyer is on track to do her 50th by late May. Joanne Smith is hot on her heels. So is Mary Clare Schneider - Mary Clare was already a regular at our in-person events, but she didn’t turn 4 until shortly after the start of the pandemic, so she never appeared in the official results. Stefano Gazzano could get to 50 sooner. (There’s somebody with his name in the parkrun database, but as they have only ever done a couple of parkruns in Scotland, we’re not sure that it’s “our” Stefano.)

Also related to 50: by the time of the shutdown 93 College Park parkrunners had earned red 50 shirts, across 181 weekly events. Such is the consistency of virtual parkrunners that there are roughly the same number who could earn CPVp 50-timer honors by the end of June. (Will we still be doing this in June? Hard to know, but we wouldn’t be surprised.) 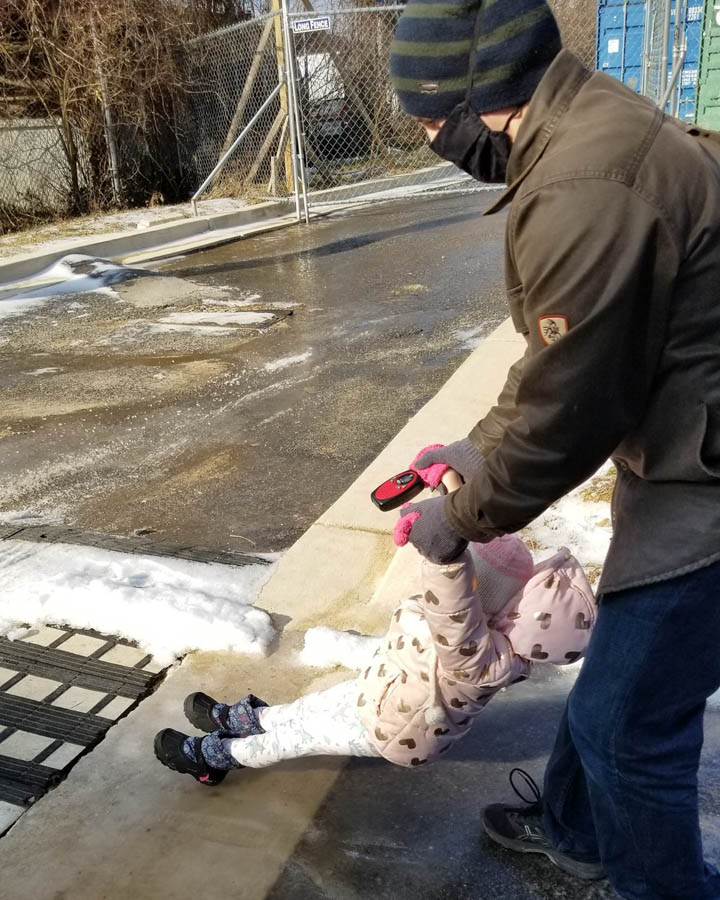 In College Park, the Paint Branch Trail was covered in more ice than we have ever seen in 5-years of Saturdays. If we weren’t in a pandemic, we would definitely have had to cancel. 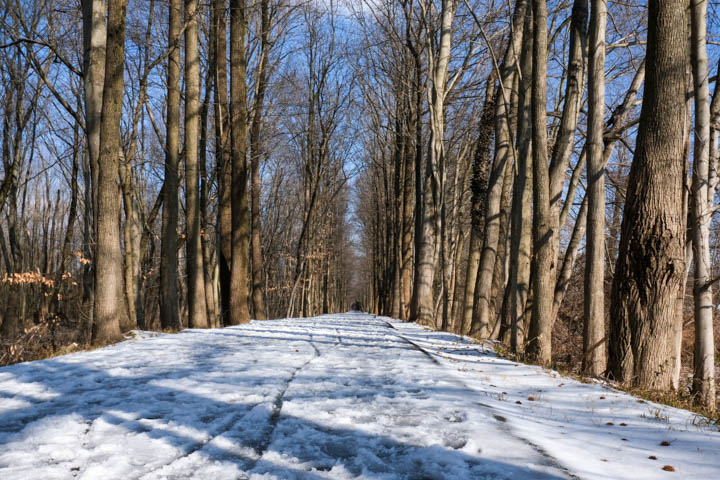 It's more slippery than it looks 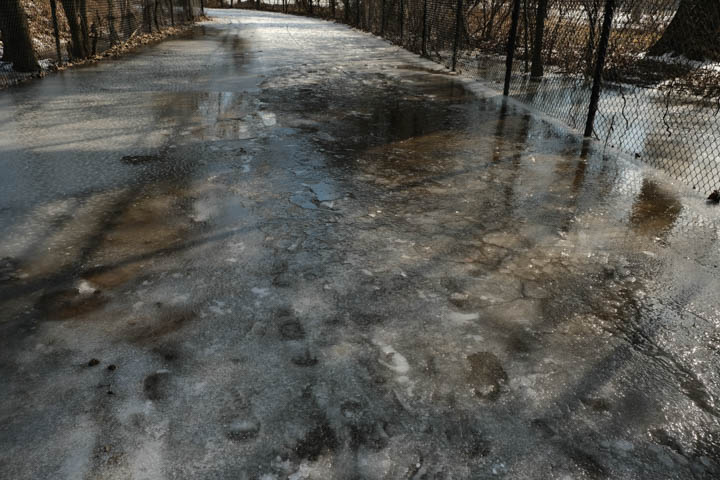 This part was exactly as slippery as it looks

Some were happy to have grippy Yaktrax (or similar) to attach to their shoes, making it possible to run or walk on the ice. 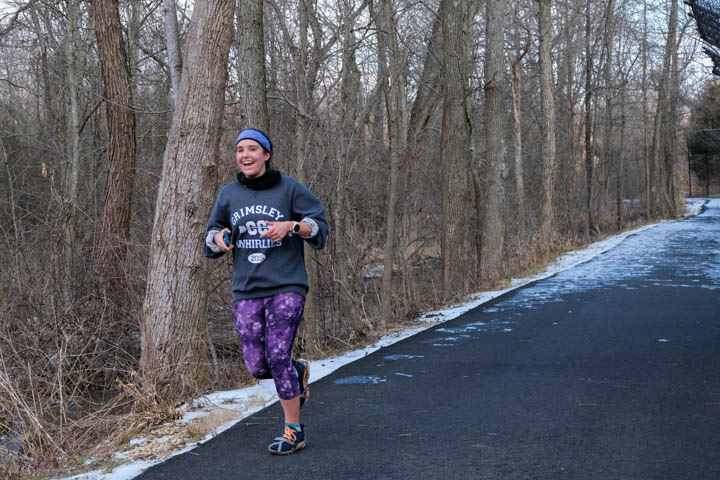 Have Yaktrax, will travel 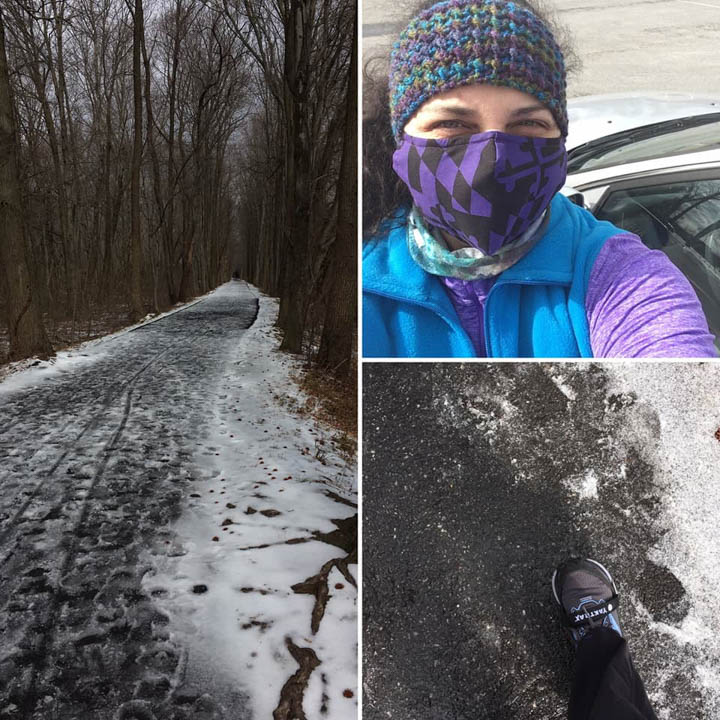 Lori was equipped for action 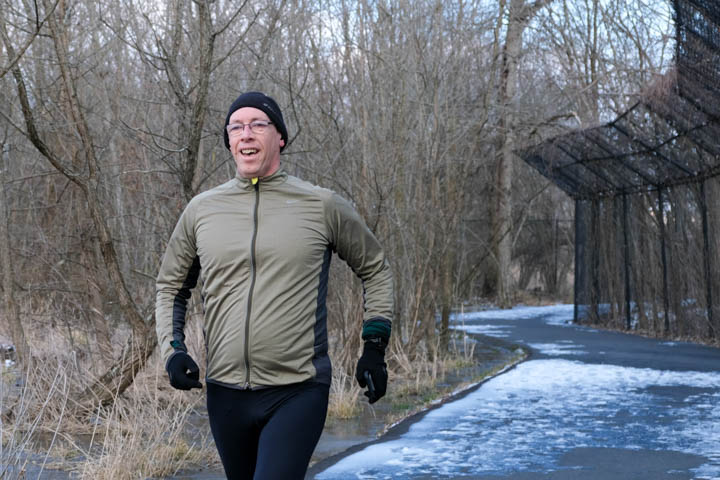 Some wisely chose to take things more cautiously. This included Stewart Mayhew, who is back to running without his arm in a sling, after slipping on ice and fracturing his arm back in December. 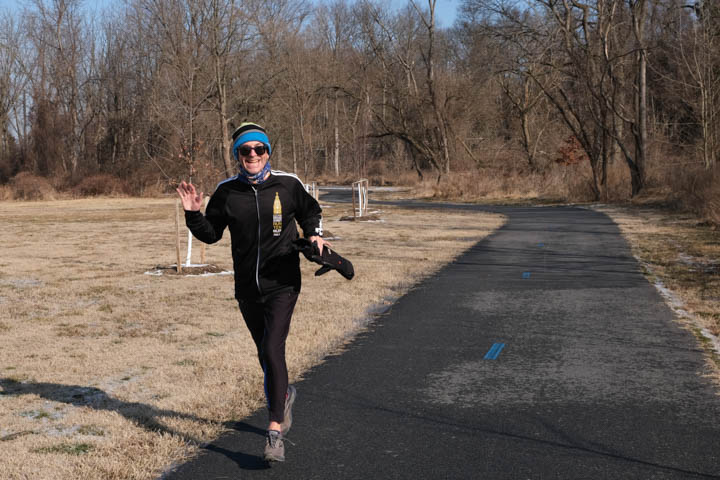 Look it! Stewart's arm is good for waving again

Some got chilly paws. And then needed to do some serious R&R. 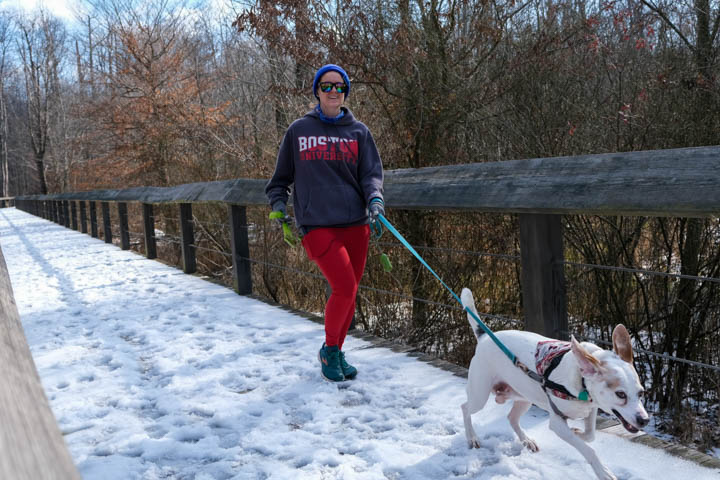 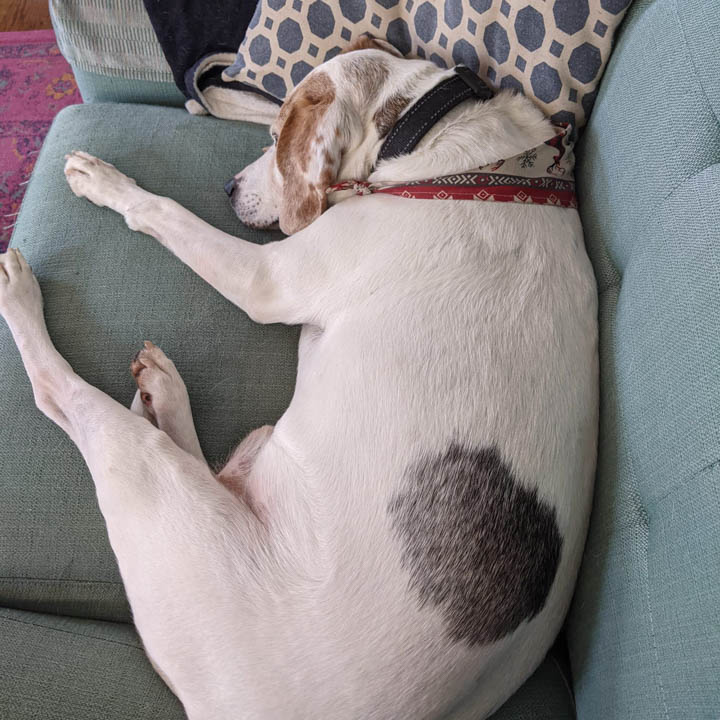 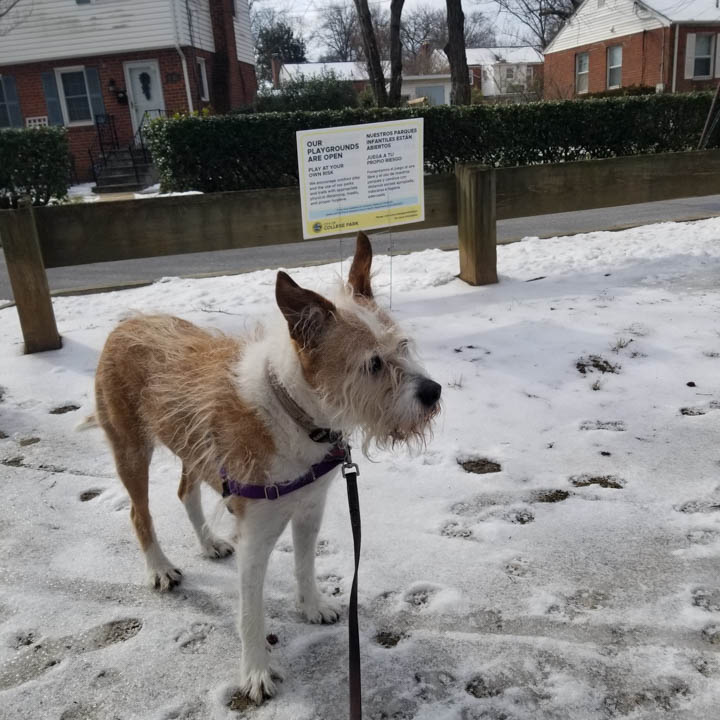 Many others saw the ice and decided to go elsewhere, in search of clearer trail or asphalt. 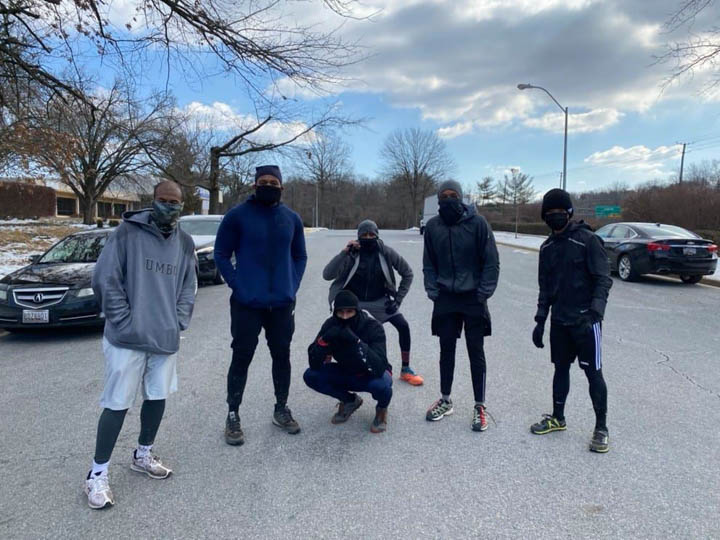 David, Malik, Dami and crew did a long run in Greenbelt Park

Some had snow instead of ice. 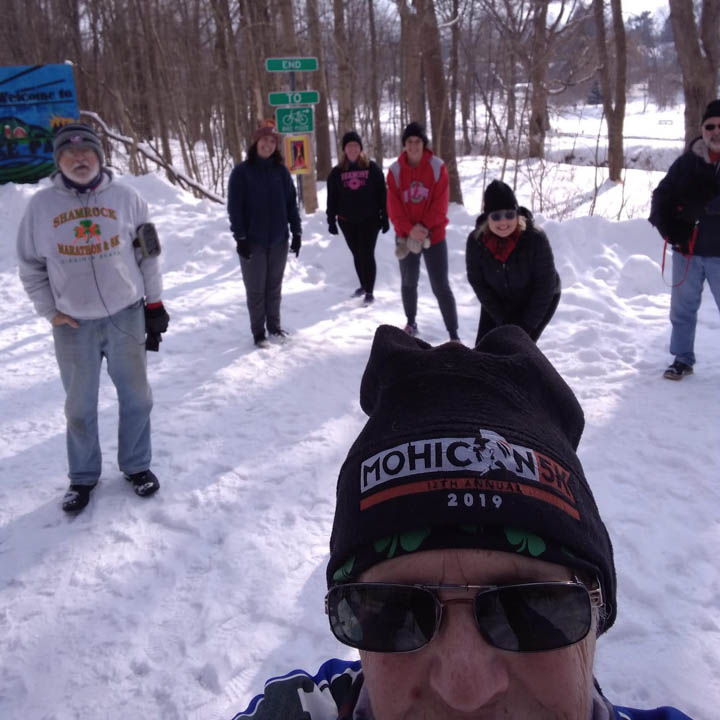 Seriously cold and snowy for the Mansfield, OH crew 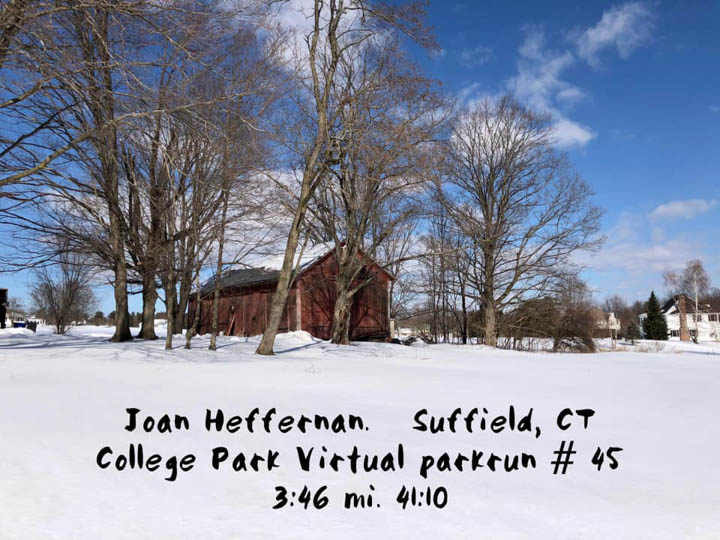 Some were fleeing the ice. Last week Emma Keer shared a picture of a big icicle at her apartment in Ann Arbor, MI. This week she updated us: the snow and ice got so bad that her ceiling was falling in. So she was fitting in her virtual parkrun in between moving to a new apartment. 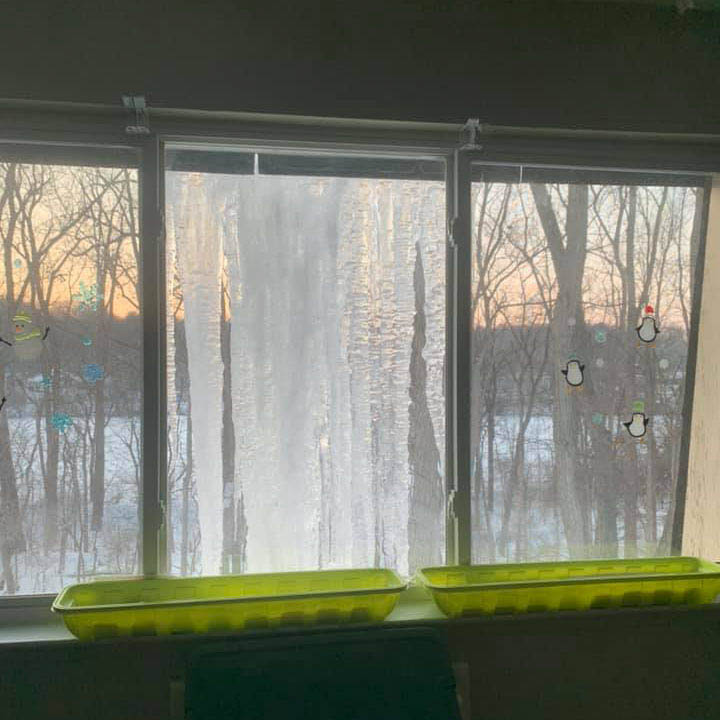 Looks pretty. Until the ceiling caves in.

In one piece of important non-ice news, Danny Walker got a new puppy. Meet Valor! A future barkrunner, we hear! 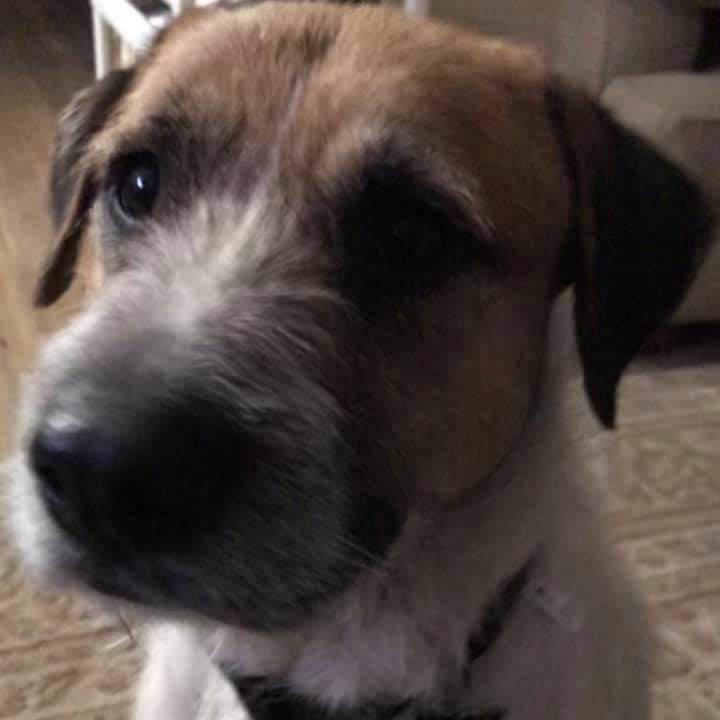 This week we welcomed FIVE first-timers: Emily Friend, Kyle McCormick, and their barkrunner Sophie. Angela Gentile encouraged them to join us, and had to assure them that the trail is normally not so icy (or empty). Dave Roeder and Teecy Robertson are part of Gail Sockwell-Thompson’s regular weekend crew from Prince George’s Running Club, so they’re no strangers to the local trails. 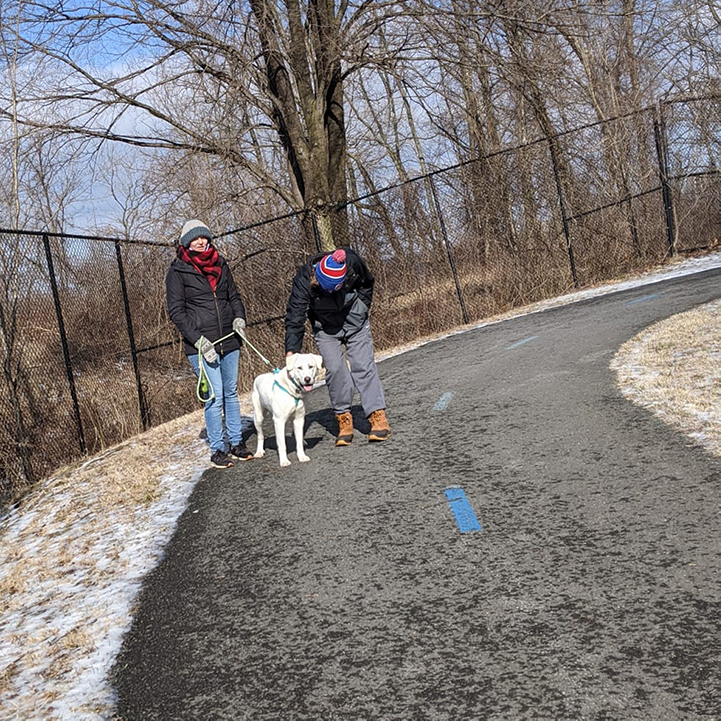 Barkrunner Sophie was adopted only last week. Welcome to College Park! (And Emily and Kyle, too) 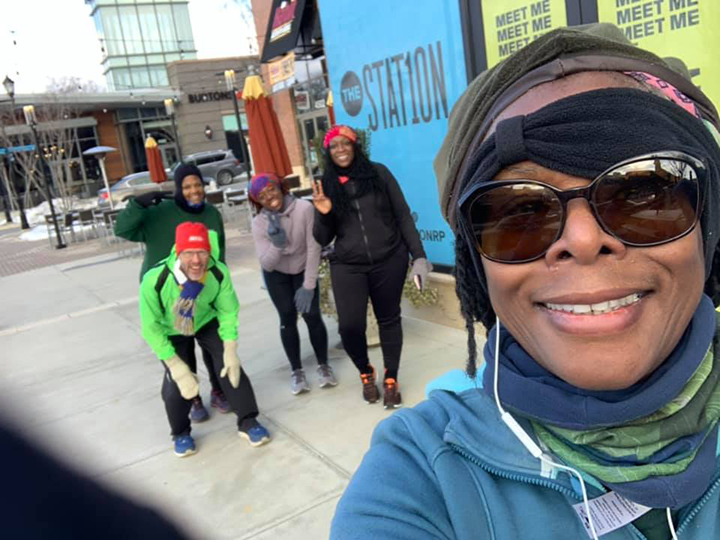 Lara Ehrenhofer is this week’s sole earner of a CPVp HIGH FIVE badge. Lara was part of the early volunteer crew that helped CP parkrun get off the ground back in 2016-2017, so she’s no stranger to the Paint Branch Trail. Nowadays, though, she’s doing her CPVps in Berlin, Germany, where she recently started a new job. Congrats, Lara! 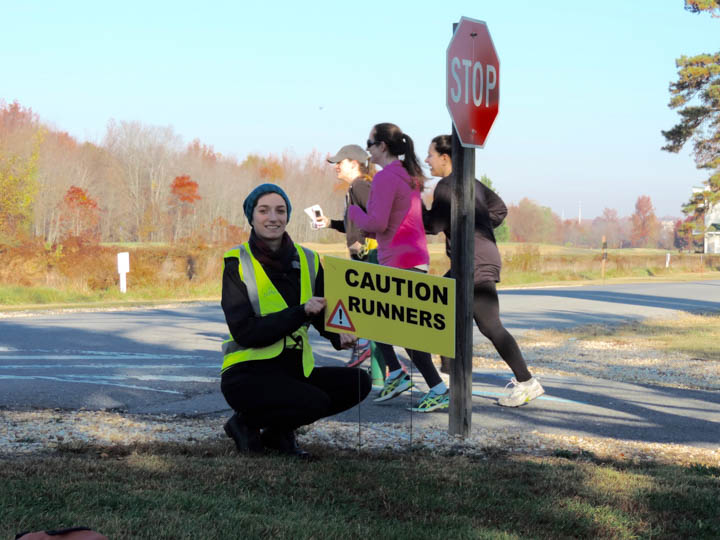 Lara in late 2016, before we knew this spot as Hump's Crossing

We had FOUR new earners of our 10-timer turtle badge. Darrell Stanaford is a long-time friend of CP parkrun, and was the founder or co-founder of all three DC parkrun events (Fletcher’s Cove, Roosevelt Island, and Anacostia). Nowadays he can often be found on a Saturday morning running the NCR Trail north of Baltimore. Ben Gieske is a former CPp regular who now joins us regularly from he and Meghan’s new home in South Bend, IN. Dennis Wojahn (mayor Patrick’s dad) got out with Karen Wojahn for a spot of XC skiing in Fish Creek, WI. And in Ann Arbor, MI, Adam Hockley did his 10th CPVp as a break from escaping a collapsed ceiling.

We awarded THREE new 25-timer badges this week. Barkrunner Tuffi didn’t do so much virtual parkrunning in the hot summer months. But since the cooler weather arrived she hasn’t missed an opportunity to go run with Gloria Cottman. Terri Snedeker was running the trails downtown as usual. And in Mechanicsburg, PA Jessica Rosenberg became the FIFTH member of Team Rosenberg to earn a 25-timer badge. 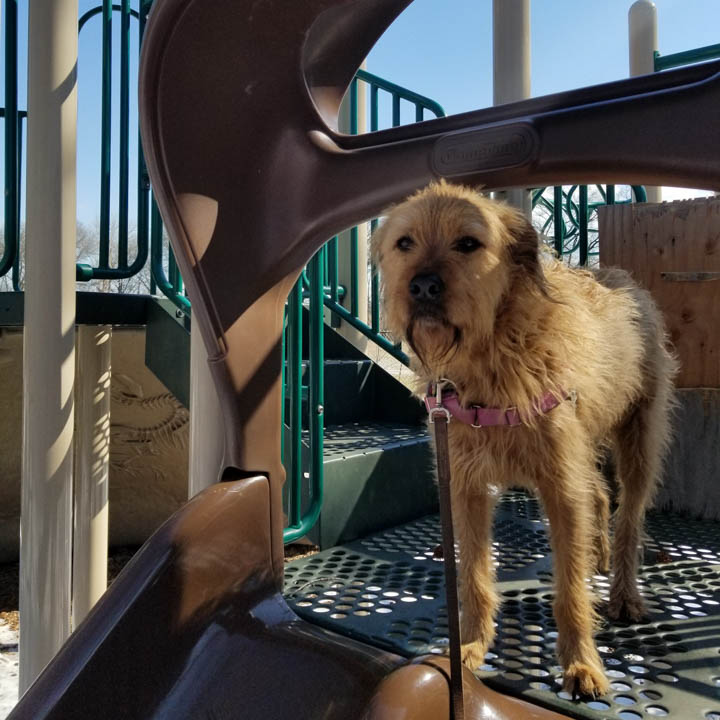 Please send warm thanks to this week’s crew of virtual volunteers. It’s a team effort every single week.

A shout out this week to Ellen Oberholtzer, who was doing her 5th stint on the virtual volunteer crew. And that’s not counting all of the contributions that she and her barkrunner Eli have made to educating us about local public art. Thanks Ellen!

And the rest of the regular crew -- between them they have been virtual volunteers over 200 times already. Hats off to the regulars!

As always, we’re looking for new volunteers who can help out in the coming weeks. Drop us a line at collegepark@parkrun.com if you can help. 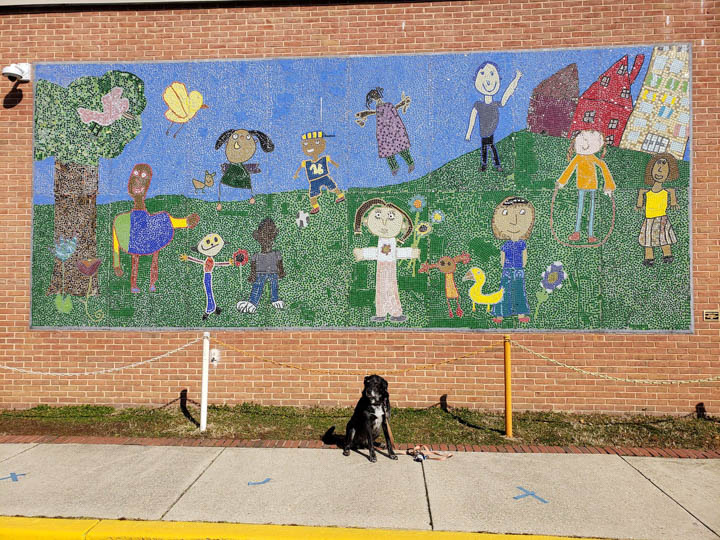 Maybe we spoke too soon! In this column last week we were getting a little giddy about the fall in COVID cases and what that might mean for our future. As recently as Thursday we were posting optimistic messages in our social media feeds. 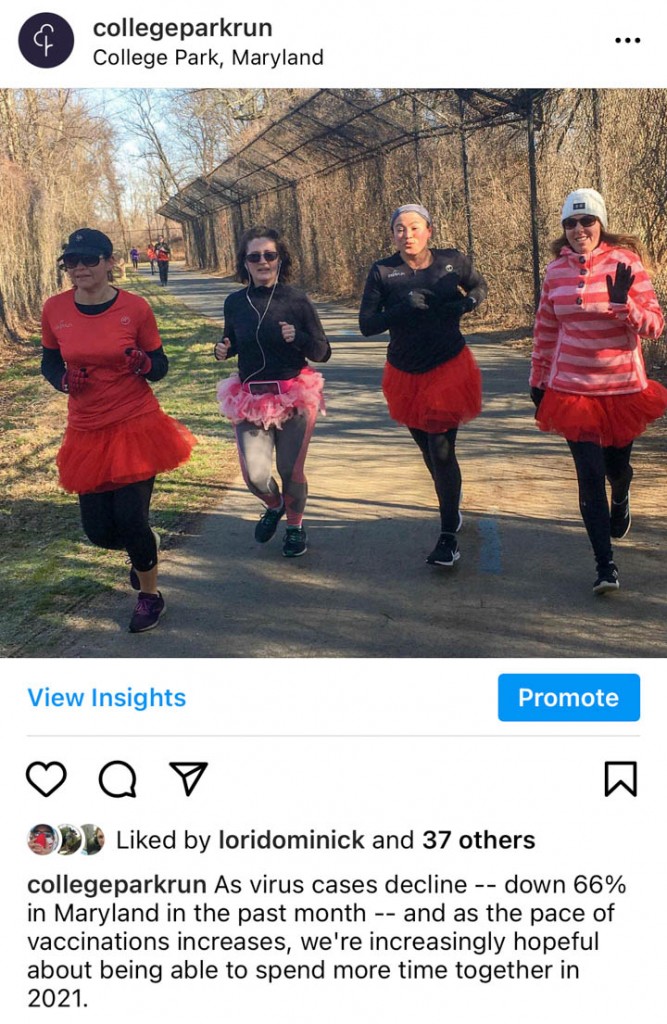 Hope we didn't jinx it. A couple of hours after posting this, we heard about the new UMD spike in COVID cases

Well, we were right about the overall retreat in the virus. Since the peak on January 12th case counts in Maryland have fallen sharply, now down to 25% of the peak rate. Hospitalizations have halved in that time. And Maryland has now passed 1 million vaccine shots delivered. All encouraging!

We were also right that we’d soon face the risk of increased mistrust here in College Park, as it became harder to tell what was going on with the virus locally.

But we were wrong about the reason.

The past couple of days has seen a spike in COVID cases at UMD. After 5 months with an average of 5-10 new reports per day, from 2/16 to 2/20 there were 228 new cases, around 45 per day, almost all among students. (The fact that the cases are mostly among students is unusual. For most of the past year the campus cases have been a mix of student and faculty/staff cases.)

UMD has acted rapidly. On Thursday they issued an alert and moderately tightened restrictions. By Saturday morning they issued sharply tightened restrictions. Students on campus are instructed to remain in their room as much as possible for the next week. Going outside for fresh air is encouraged, but they should stay close to their building. Many reports highlight the pause in in-person classes. This is likely not such a big deal, as in-person classes are few in number, and account for so little of the current activity. Something that gets less attention in reporting is that only a fraction of the students currently in town are in UMD controlled housing. It’s harder to know what is happening there.

It is not yet clear what caused this rapid spike in cases at UMD. Based on what we see on campus and around town every day, there is no obvious change in behavior. It’s not hard to find cases of risky behavior, but there is also a LOT of sensible behavior. Testing protocols have become stricter since last semester. UMD uses a mix of swipe key and wifi access data to keep close tabs on everybody who visits the campus, and whether they have been tested recently. 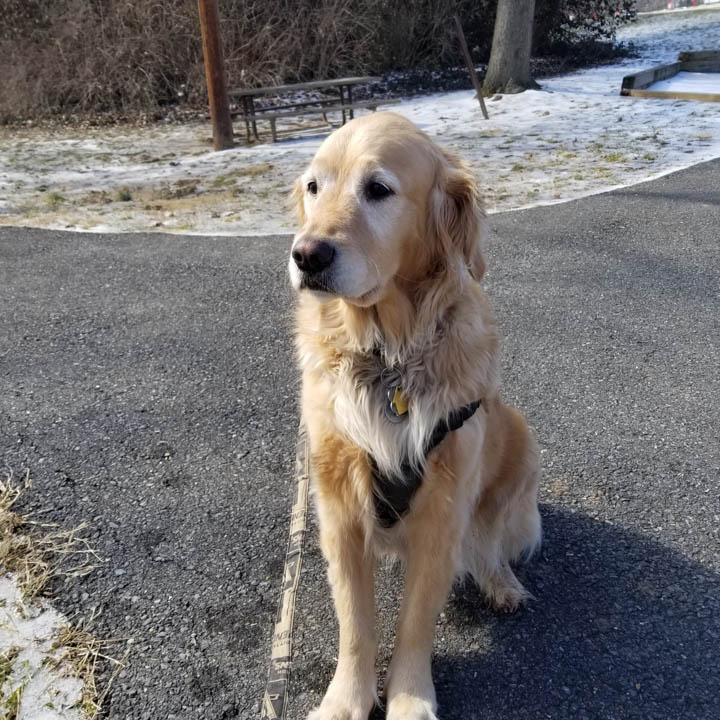 The world would be simpler if we were all barkrunners like Belle. For a start, we would be immune to the virus. Hopefully we'll all be like Belle soon.

Is the spike in cases a consequence of a slight increase in local housing density? Is it due to cold weather pushing more activity indoors? Is it due to increased complacency due to overall positive trends in virus cases and vaccination? Is it due to one of the new variants? Is it just the end of a run of good luck? We have no idea right now.

It looks like it’s worse right now at the U of Virginia.

What is already clear is that this creates heightened risk of tension, confusion, resentment, and physical and mental health challenges in our community. Students are an important part of this community.

We really don’t know how this will unfold. It may be a short blip on the overall decline of the pandemic. Or it could be the start of a serious new wave, like the one that overwhelmed the UK in January. But we hope that we’ll see a continuation of the broad goodwill, positive attitudes, and attention to safety and to community that we have seen over the past year. 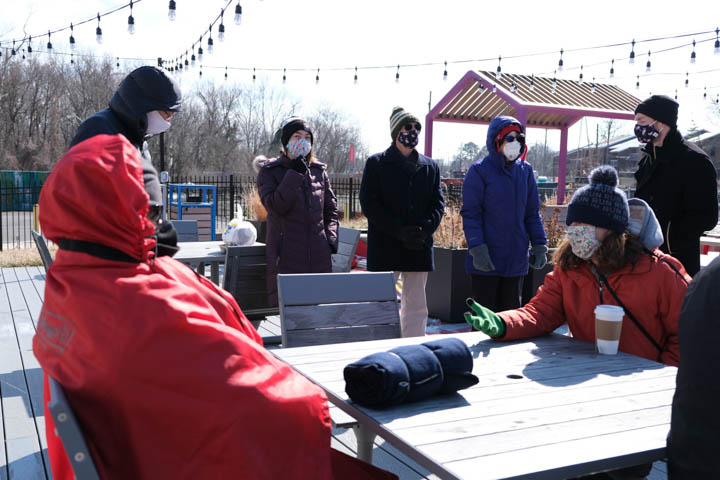 Looking forward to milder weather for our social-but-distanced coffee

Meanwhile, in the UK the government on Monday announced a staged roadmap for the gradual lifting of pandemic restrictions, which have been much stricter than ours over the past couple of months. We don’t know if it will work, but if it goes well, it might possibly see the return of UK parkrun events in the spring. While that’s not a direct trigger for the return of events like ours, it’s one of the things that makes our return easier.

We’re looking forward to milder weather in the coming days. Next week we may have our first above-freezing Saturday morning in the DMV in over a month. Spring is on the way! 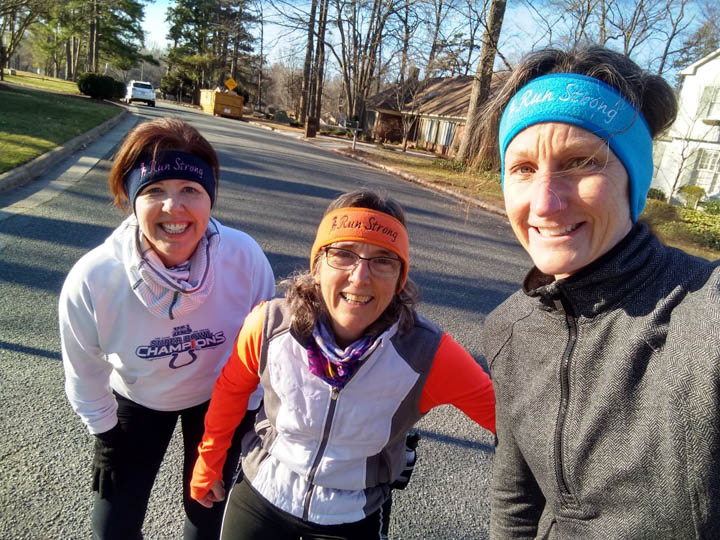 Andrea Maas and her crew, with no ice in sight in Greensboro, NC 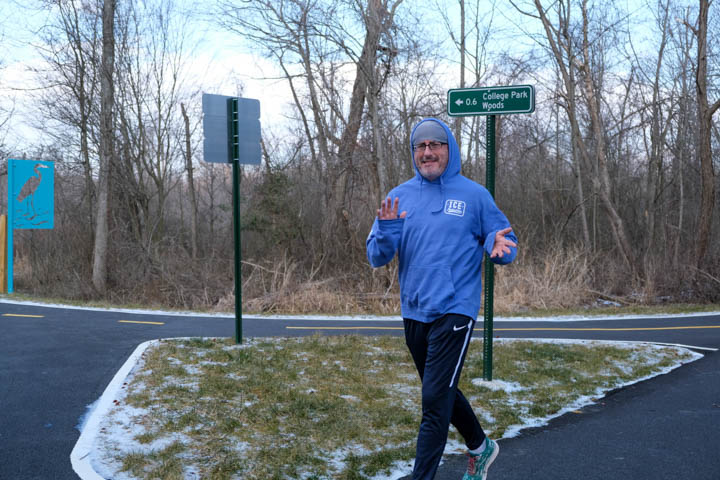 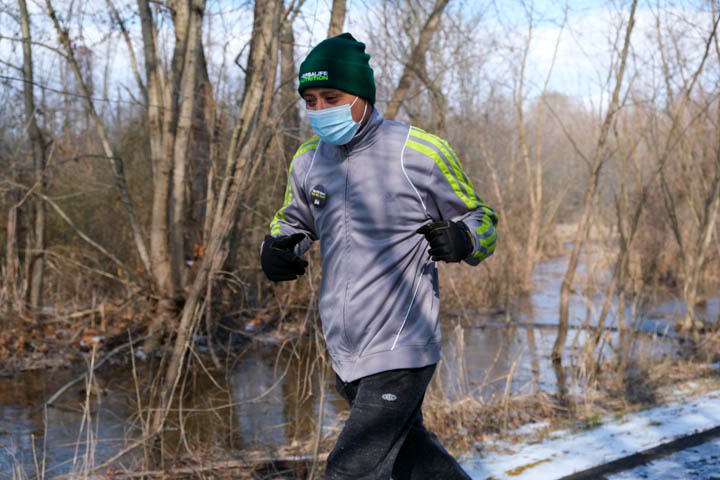 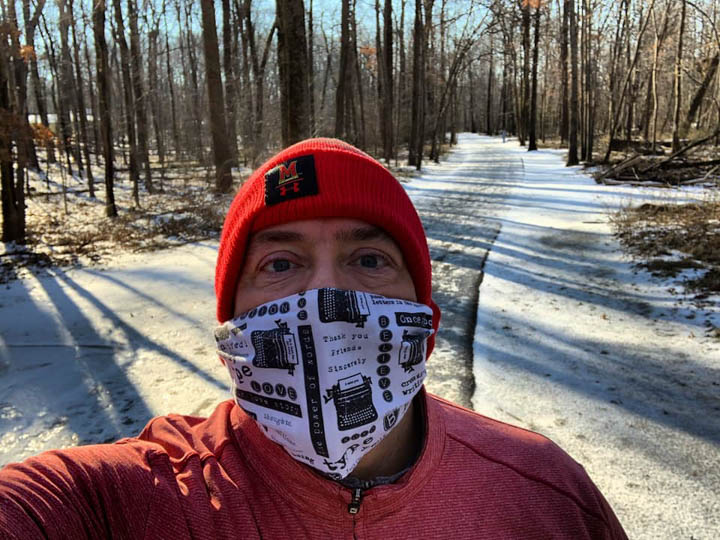 Less ice next week, we suspect. See you then!