This story appeared in the November 2020 edition of College Park Here and Now, the new newspaper serving the College Park community.

When Pratyush Tiwary’s plans to run a marathon in September fell through due to the pandemic, his alternative plans unfolded in a very College Park kind of way.

Pratyush and his wife, Megan Newcombe, recently moved here with help from the College Park City-University Partnership’s homebuyer program, and they both looked forward to the convenience of living close to their work at the University of Maryland (UMD). Their home in the Berwyn neighborhood also provided great access to the local network of walking, biking and running trails.

For his marathon, Pratyush devised a virtual race, on trails close to home, with easy access to supplies and refreshments, and including a mid-point water top-off from Megan. And instead of toughing out the last miles alone, he had pacing support from UMD student Matt Laskowski. Pratyush found Matt by connecting the dots between a name he recognized from his fitness tracker app, Strava, and a student’s name in the physical chemistry class he was teaching at UMD. 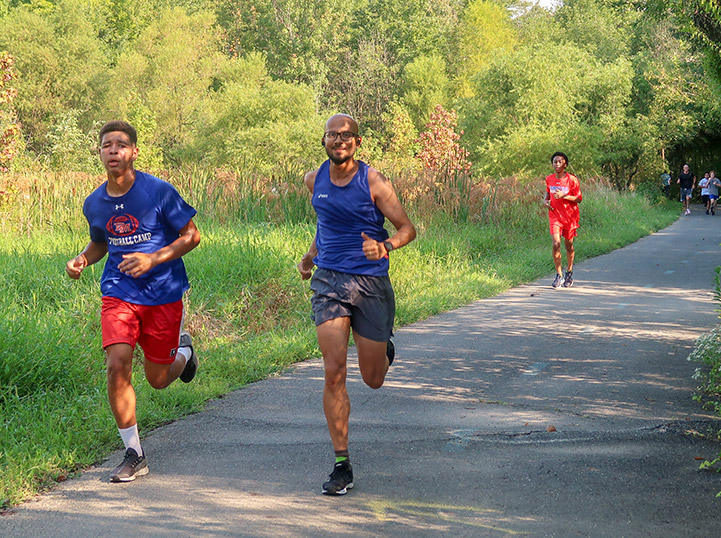 Strava is a popular social app for fitness activities like biking, running, walking and kayaking. Friends share activities, give kudos to support each other’s progress, and sometimes compete for speed or frequency on segments that users create. Popular Strava segments in College Park include the loop around Lake Artemesia and Shady Straight, the wooded stretch of the Paint Branch Trail north of Route 193.

Pratyush logs his activities on Strava. Sometimes he runs with his dog Pakora. He recognized Matt Laskowski as one of the faster runners in the area. Matt’s name appears near the top of the leaderboard on a lot of local Strava segments.

College Park has an enviable selection of trails that connect local neighborhoods and link the city to the broader region through a larger trail network.

Some of these trails, including the Northwest and Northeast Branch trails, the Paint Branch Trail and the Indian Creek Trail, are part of the Anacostia Tributary Trail System. The trolley trail follows an old streetcar line. The Lake Artemesia trails are a byproduct of building Metro’s Green Line. 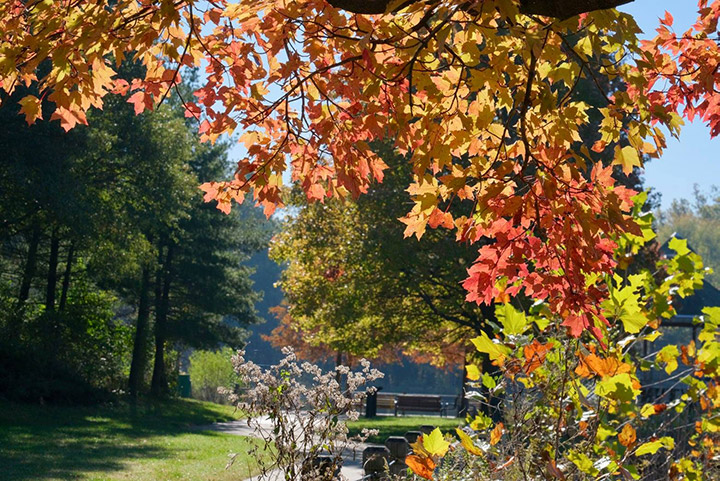 Recent improvements have increased connectivity among trails. The Northeast Branch now continues to the Anacostia Riverwalk Trail, which runs through Kenilworth Aquatic Gardens and on to the District. The Paint Branch Trail now extends to Beltsville, and beyond to the Intercounty Connector Trail. The Rhode Island Avenue Trolley Trail now connects College Park to Riverdale Park and Hyattsville. A soon-to-open connector trail will link the College Park Woods neighborhood to the rest of the network. And more improvements are in the works to  give North College Park residents more direct access to the network of the trails.

College Park has arguably some of the best and most-used trails in the area, based on data in the Strava Global Heat Map. This app allows users to record where they are, and then it produces a cool — or, really, hot — visualization of where people are concentrated. The app shows College Park shining brightly. 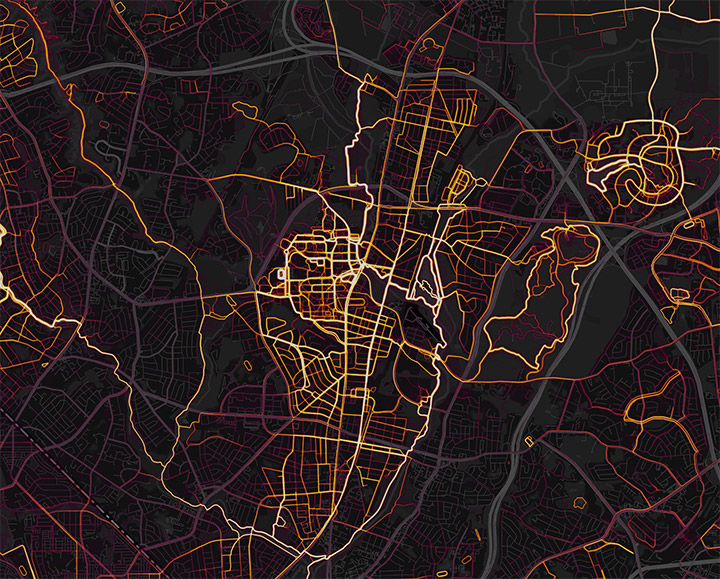 The city’s trails are one of the attractions that brings visitors to College Park, including bicyclists and runners. Popular events like the Washington Area Bicycling Association’s November Cider Ride see hundreds of riders on our trails. The weekly Saturday College Park parkrun has introduced thousands to the Paint Branch Trail, and many of these runners return to the city’s trails at other times of the week, as well.

Prince George’s Running Club (PGRC) members hail from across the county, but many of their group runs take place on College Park’s trails and the UMD running track.

Recently, parkrun regular Stewart Mayhew ran 10 miles from his home in Chevy Chase to College Park, stopped to enjoy a mug at Vigilante Coffee, and then ran the 10 miles back home.

The College Park trails are what sociologist Ray Oldenburg called a third place — a place where people in a community come together, separate from home and work. It’s where we encounter familiar faces and start to recognize people we might not meet otherwise. With the pandemic forcing limits on indoor gatherings, having third places, outdoors, has become even more important. 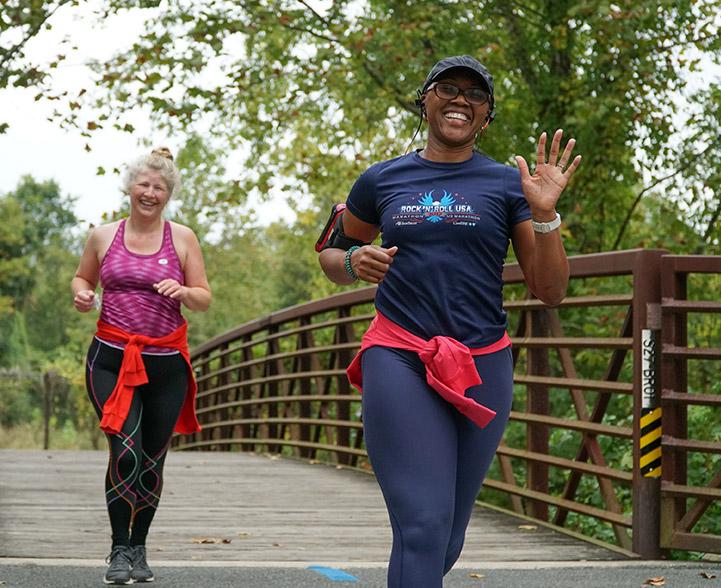 When Pratyush Tiwary approached Matt Laskowski about helping with his marathon, Matt quickly agreed. “I am a part of Club Running at UMD. We think of ourselves as a part of the College Park running community. If somebody else in the community has some goal, then we are all for helping them reach their goals.”

A poll of PGRC runners found that the most popular elements of the local trails are shady stretches, wildlife and water fountains (when they are turned on). The trolley trail scored extra points for having waste stations for dog walkers. People would love to see more benches, even more shade and year-round bathrooms.

Riders would welcome improved lighting; this would potentially make the trails usable for year-round commuting. The proposed Paint Branch Riverwalk project could help integrate trails with other community activities and businesses.

And there are many who just don’t know about the great trail resources in our midst. Runner Matt Laskowski guesses that most UMD students are familiar with the stretch of the Paint Branch Trail right next to campus, but suspects that few are aware of the wonders that lie beyond.

For Pratyush Tiwary, his virtual marathon was a resounding success. He set out at 5:30 a.m., starting on the trolley trail, where the lighting made it possible to run before sunrise. Then he meandered around familiar trails until it was time to refuel and meet up with Matt Laskowski, who joined him for the last 10 miles. Matt’s pacing clearly helped, as Pratyush beat his best marathon time by nearly 30 minutes. 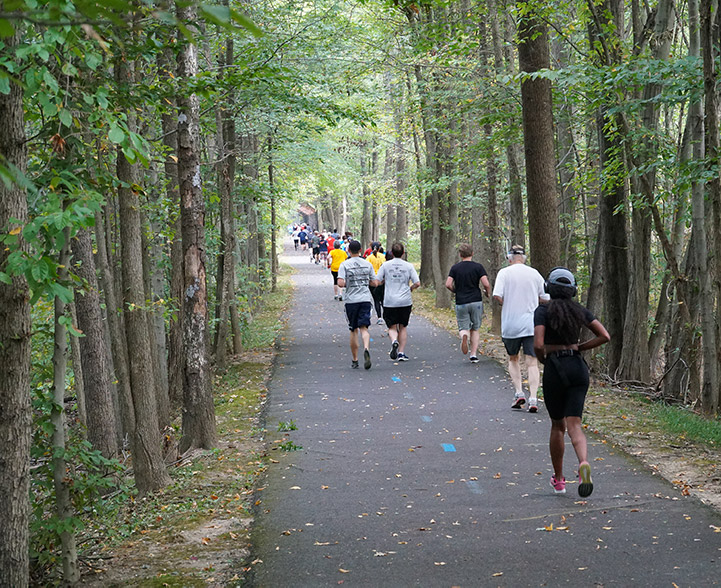