Please do not attend parkrun if you display any COVID-19 symptoms.

You know that feeling where you’ve been cooped up for months? You want a little space, some time to yourself? That’s apparently how Lisa Wilson’s mom felt on Saturday morning. So, she called up Lisa and encouraged her to take her dad for a walk. Nothing much unusual there. Except that Lisa’s mom is 103 years old. And that’s how James Wilson, age 102, became one of the 150 participants in College Park Virtual parkrun #6. And yes, he walked 5K. It took 2 hours and 20 minutes. And why not! As we know, it’s not a race.

In fact, James already had a parkrun barcode. He joined us in late 2018 at the tender age of 100. (Colin remembers that day fondly. Lisa commissioned him to do the first half of the parkrun carrying a (sealed) mug of hot cocoa to deliver to James at the turnaround.) 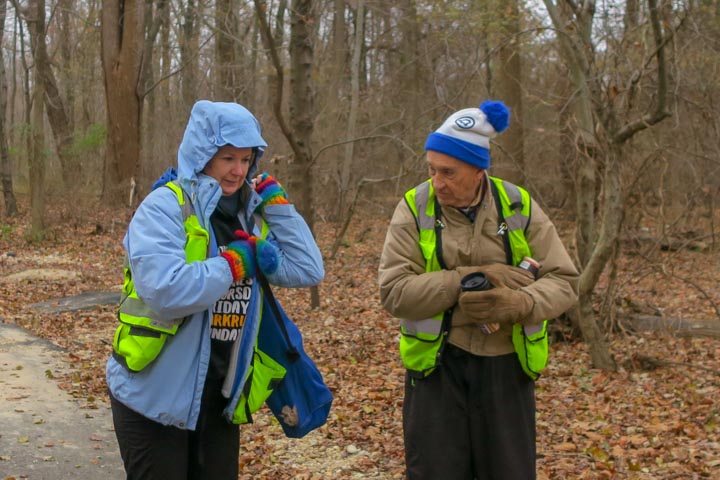 This week we also pushed the other end of the age scale. Rachel Unger joined us for a “parkwaddle” in CPVp #2-#4 while very pregnant indeed. She skipped last week. Turns out she had a great excuse, as she gave birth to a baby boy on Saturday. This week, Rachel and husband Jeff Brown walked 2K around their ‘hood with 7-day old Felix (and barkrunner Scooter). Welcome, Felix!!

We just love hearing about all your stories each week. This week we were feeling more than ever that we are stronger together. 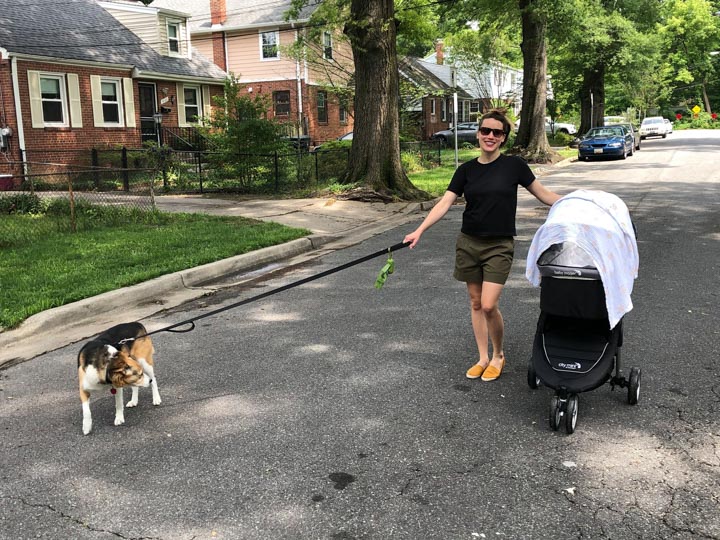 No more parkwaddling for Rachel! 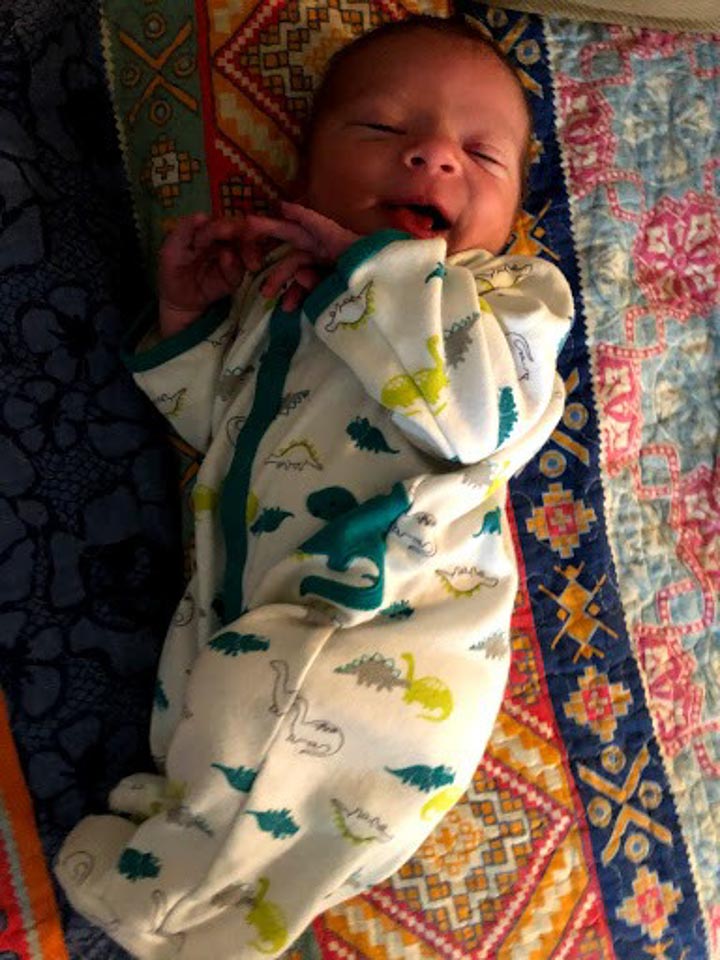 Here is College Park Virtual parkrun by the numbers. 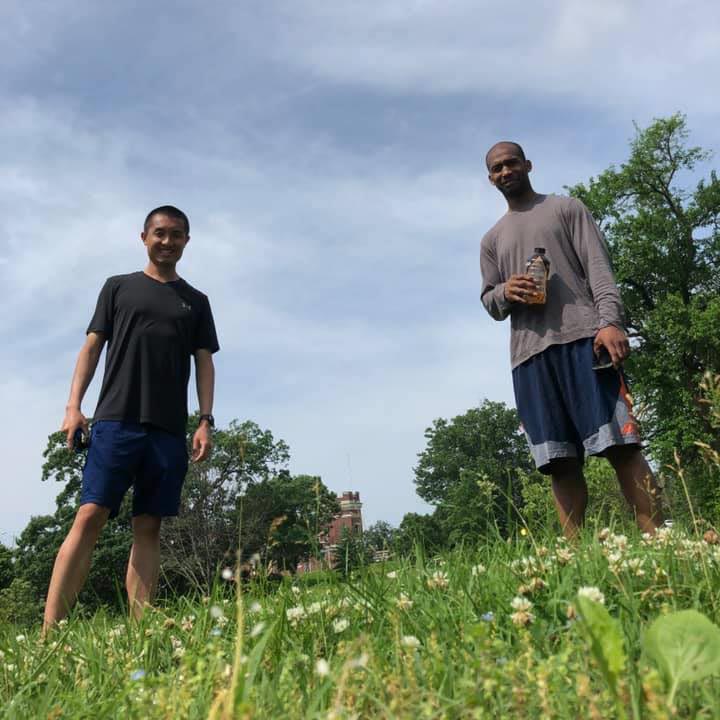 David combined his CPVp with the Virtual Baltimore 10 Miler

For CPVp we encourage you to take part how you want and where you want, as long as it’s safe. Many people choose to run, and a lot of people choose to walk. This week we added parkmarching to the options, as a few of you got miles in at the Black Lives Matter protests, either downtown or in Hyattsville. 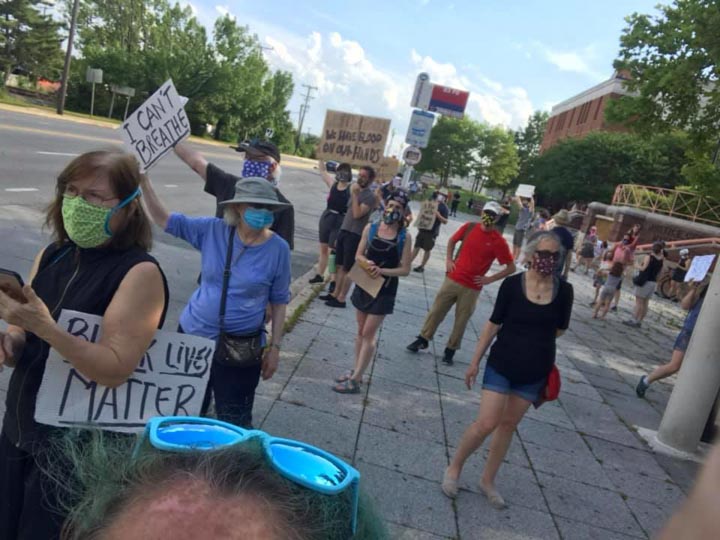 From Valerie Silensky's virtual parkrun in Hyattsville. Note the masks and distancing.

We cannot ignore that our virtual parkruns are taking place in a time of immense upheaval in society around us. Between the pandemic, the economic meltdown, and the response to social injustice there is so much to be worried about right now

And we are well aware that some of us enjoy privileges that others do not. White privilege is very real. Having a job that allows you to work from home is a privilege. Being young and having a dramatically lower risk of severe COVID-19 outcomes is a privilege. So is being free of underlying health conditions that make the world a dangerous place right now.

We need to take seriously what this means for us as a community within a community.

parkrun as a global initiative is committed to diversity and inclusion. At College Park parkrun we take inclusion very seriously. We think that it is not enough to merely say that “all are welcome”. People need to really feel that they belong, that they fit in.

We are glad that College Park parkrun has become more diverse over time. We see people from a wider range of ages, speeds, and social and ethnic backgrounds now than when we were getting started.

We love the fact that we live in an area with a rich mix of people from diverse ethnic and national backgrounds.

Meanwhile, CP parkrun is the only parkrun event in Prince George’s County, which faces widespread health challenges. One of the goals of Prince George’s County Parks & Recreation is to use outdoor spaces to help improve community health. We are happy to contribute to this, but we want to do more.

So we want to hear from YOU about things that we can do, individually and as a community, to make a difference in our community, to broaden participation, community connections, and to improve health outcomes.

We can make statements about our values and our hopes, but as an entirely grassroots, community-led initiative, we are most interested in the things that we can actually do to make a difference to realizing those goals. 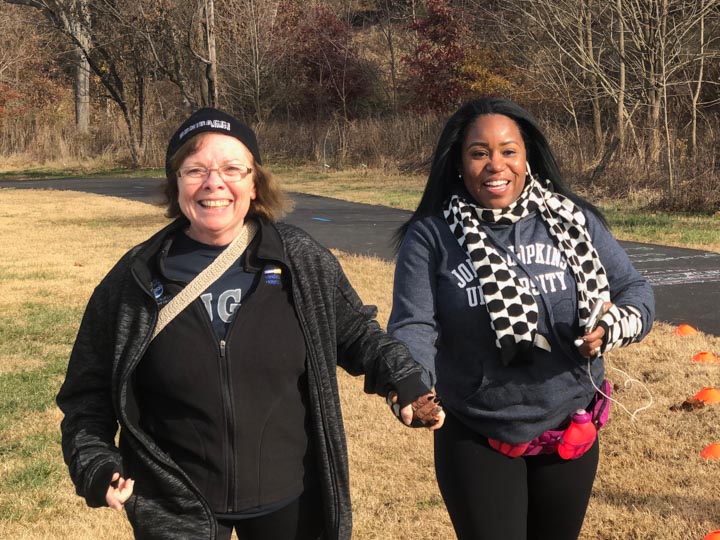 We want to help more people in the community come together

They scrub up well!

Zoe Phillips had a high school graduation at parkrun o’clock this week. Zoe volunteered almost every week at CP parkrun this school year. At first, the aim was just to do some volunteer hours to satisfy a graduation requirement. Then Zoe came to really love the CP parkrun community, and continued volunteering, just because. And then started joining as a runner, too.

Zoe will be staying very close for college (Go Terps!), so we’re hopeful that this is one regular volunteer who we won’t have to say goodbye to.

Zoe’s graduation presented an interesting challenge for the proud parents, since they also handle the technical side of our virtual meetups. So, Andrea and Colin both headed out early for a run in the soupy morning weather. Then tried to quickly cool down to change into respectable graduation attire. This left them a little over-dressed for the 8:50am virtual parkrun briefing. 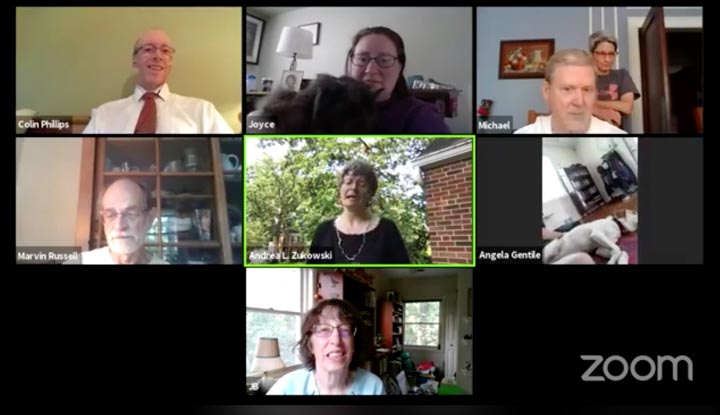 Perhaps a little overdressed for a (virtual) parkrun

From there they were able to immediately join the virtual graduation. And then by 10:30, when it was almost Zoe’s turn to be recognized at the graduation, they had the graduation and the parkrun coffee meetup going at opposite ends of the dining room table.

These are some things that it’s easier to do in the virtual parkrun format than in the traditional format. 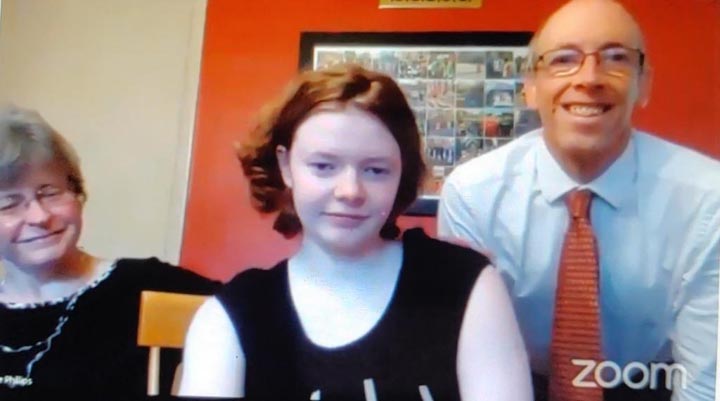 Congratulations, Zoe! Looking forward to more volunteering and running when we're back together in person.

Oh, and despite the heat and the hectic schedule, Andrea somehow managed her 6th week of fastest-in-two-years might-as-well-be-a-PB time. Go Andrea! 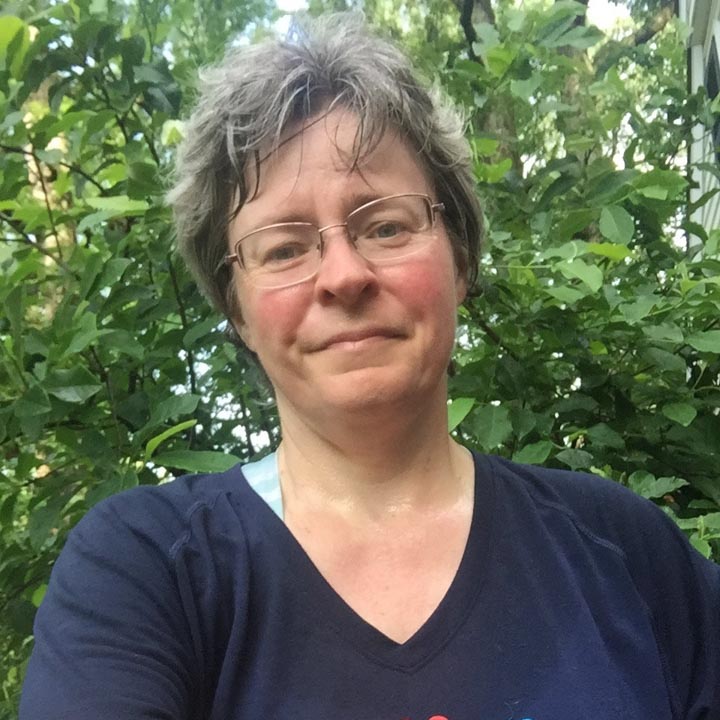 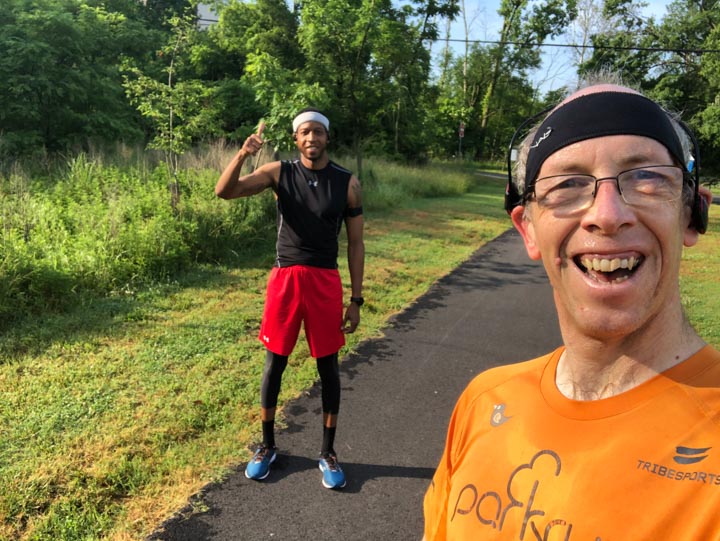 Ah, that looks more like it. A short while earlier, on sweaty morning virtual parkruns

Welcome to the Aguilera-Kelley clan, regular parkrunners who joined us en masse for the first time. Carolyn and Jorge ran with Diego and Lucas, and Nico joined on his bike. Excellent! 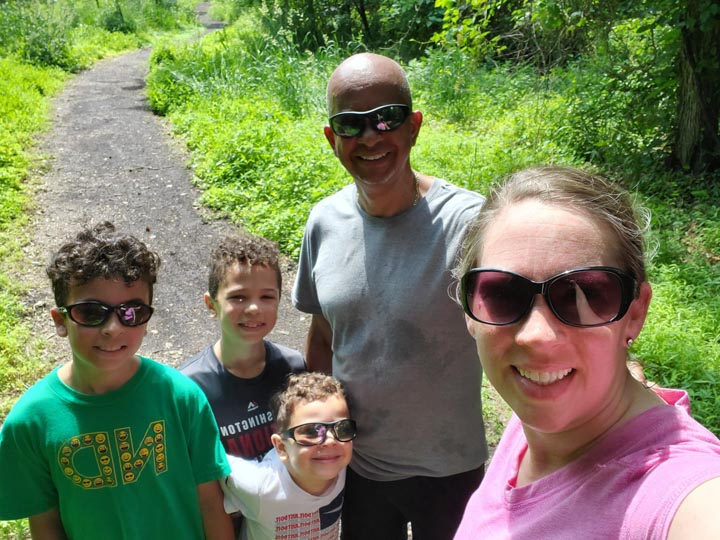 Team Schneider did their parkwalk on the shore at Rehoboth Beach, DE. Erin reported that their time was a bit slower this week, because there were too many cool things to look at. Sounds perfect! 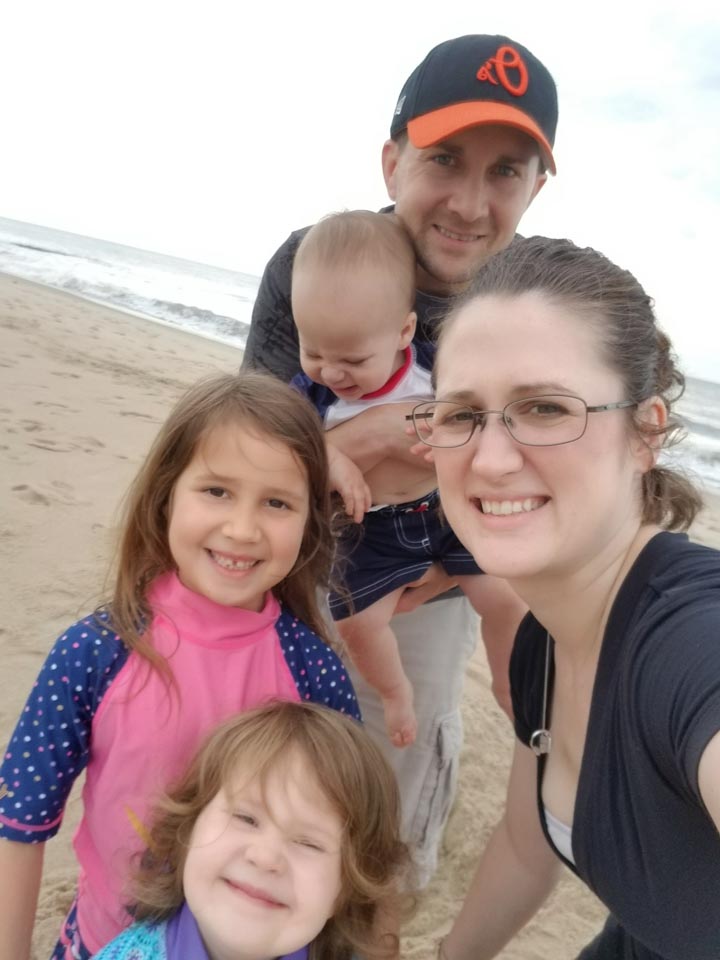 That is NOT the Paint Branch creek!

The Rosenberg clan was also out in force this week, but from different corners of the country. Duane was joined by his brother David (in Iowa) and nephews Jeff (in Colorado) and Brian (in Pennsylvania). First-timer Brian was this week’s fastest finisher, setting a CPVp record. Duane explains that Brian won the Baltimore Marathon in 2014, but has a bit less time for running these days while raising a half dozen future Rosenberg runners. 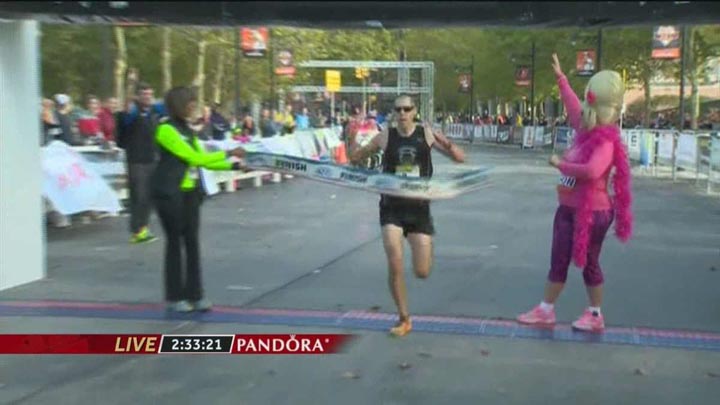 Brian Rosenberg winning the Baltimore Marathon in 2014. Everyone's a winner at (virtual) parkrun, but Brian's still pretty speedy, like his uncle Duane

Derek Symer was joined by his wife and first-timer Allison Aubrey for a 5K around their neighborhood in Kensington, MD. Derek wrote: “"I walked 3.1 miles with my wife today. She stopped to smell and taste mulberries, pull a book from the free library, chat with a neighbor. We still PR’d.” This sounds great, and it reminds us of one of our all-time favorite children’s books, DB Johnson’s Henry Hikes to Fitchburg. Beautiful art, and a moral that’s all about enjoying the journey. 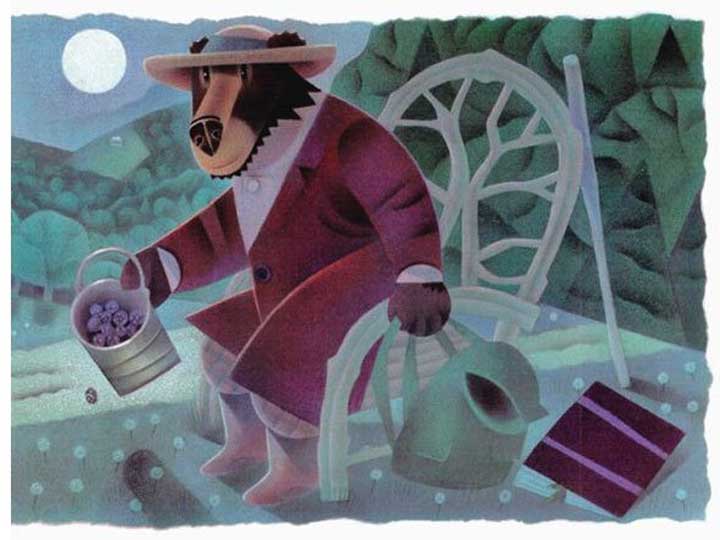 "His friend was sitting in the moonlight when Henry arrived. "The train was faster", he said. Henry took a small pail from his pack. "I know,", he smiled. "I stopped for blackberries.""

No tales of lost kittens this week. But we did have baby ducks! Many parkrunners who headed out on the Paint Branch Trail enjoyed meeting a family of ducks who were unperturbed by the passing parkrunners. Well, mostly. They didn’t seem to mind the humans, but Cameron McPhee reports that they were a bit more circumspect about barkrunner Ranger, who was showing a little too much interest. 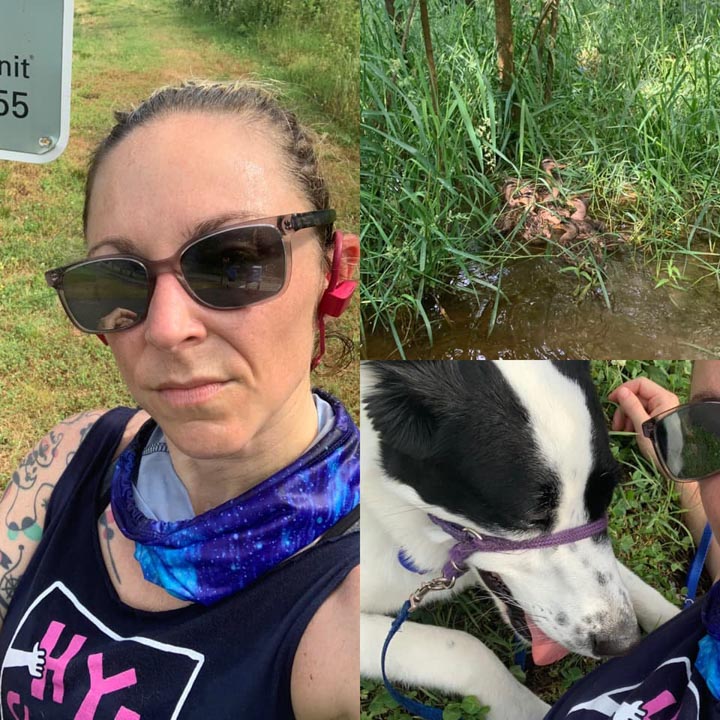 Stay away from those ducklings, Ranger!

Angela Gentile and Thomas Hool headed out for a run with barkrunner Shackleton on the Paint Branch Trail. They cleverly brought along a water bottle and a bowl to stash at Hump’s Crossing. Shackleton appreciated it, but still feels that Hump’s water bowl is better. 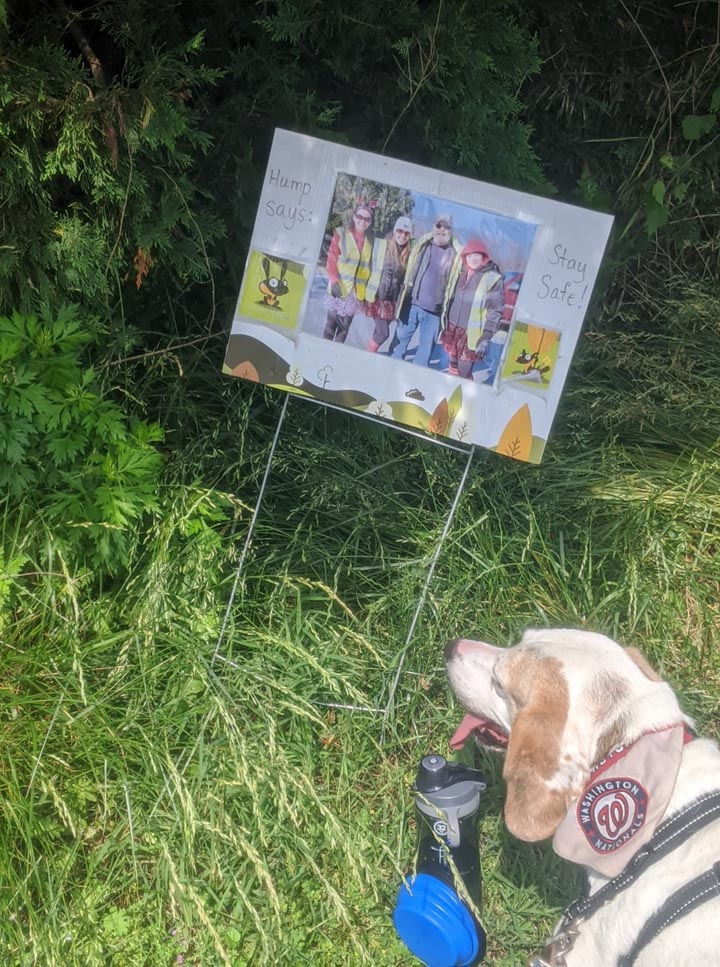 Shackleton: "I miss Hump (and his water bowl)!"

Barkrunner Wonka joined Rebecca Gitter for a parkwalk around Hyattsville, and appreciated the puddles that he found. 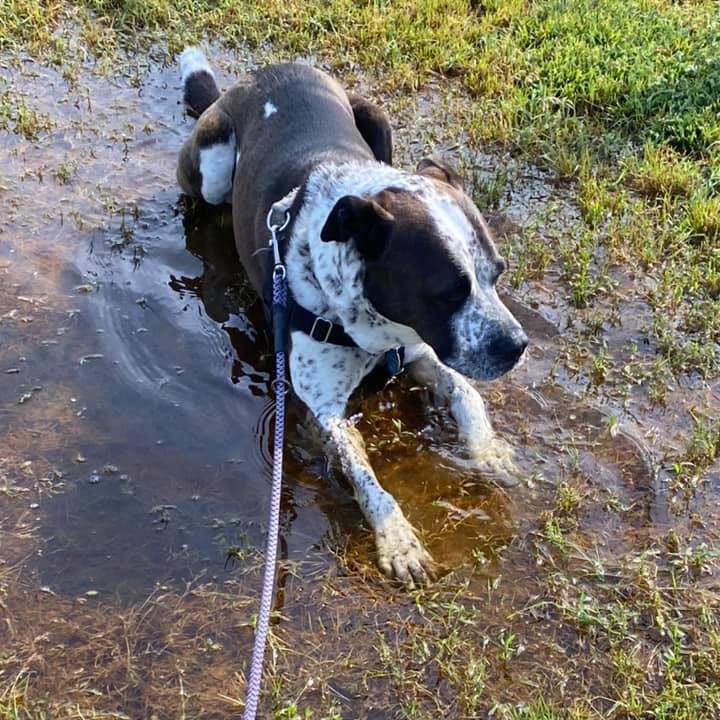 Well, that's another way to enjoy your water

Barkrunner Foxy got in a 4 mile run in Canton, OH together with Eden Gray (of Roosevelt Island parkrun) and Sam Mora (of Sippo Lake parkrun). Special kudos to Sam for his return to running after a car accident.

And Emma Keer, virtually parkrunning in Ann Arbor, MI, is this week’s winner of our occasional Strava art contest with this dolphin. Nice job, Emma! Emma is also a key part of the energy behind Lillie Virtual parkrun, which is doing similar things for the Ann Arbor community that we're trying to do in College Park. Their virtual parkrun briefing video this week, made by the Yun family, is just brilliant. Check it out (it's on Facebook only, alas.) 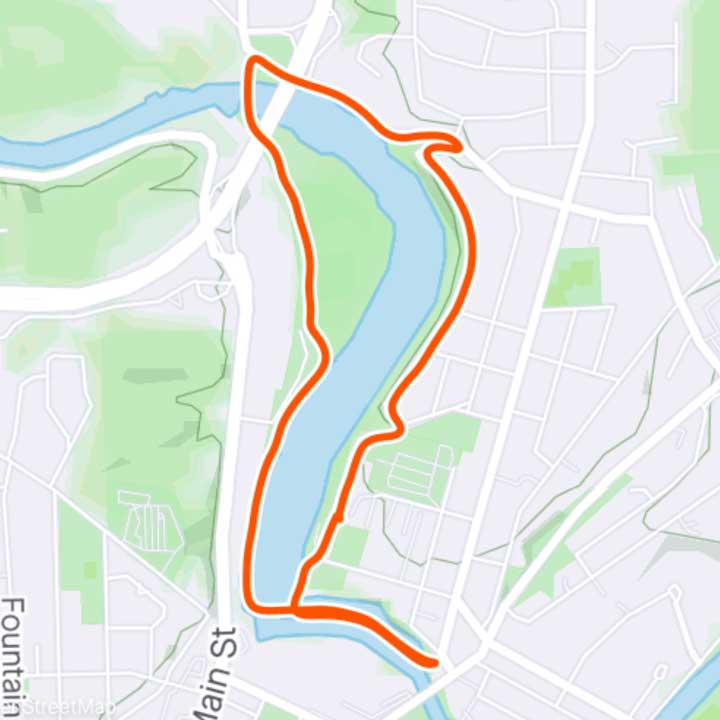 This week, in our 6th week, we bestow virtual high fives on 27 new members of the 5-timer club, to add to the 58 who joined the high five club last week already.

Fun fact: in our 6 weeks of virtual parkruns we’ve got as many 5-timers as we got in the first 6 months of official parkruns. Maybe our Saturdays are just a bit less crowded now than they used to be. 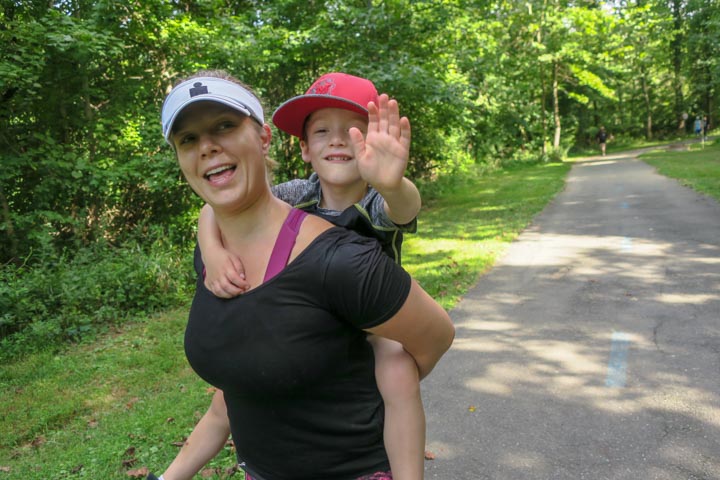 Many thanks to this week’s virtual volunteers.

Katie Hirsche and Trace Huard were this week’s results team crew, with Katie following Strava and Trace following Facebook. Ellen Oberholtzer helped gather material for this report. We LOVE all the pictures and stories that you share with us for your virtual parkruns, but it’s a bit more complicated than it is for the regular parkruns, and so the team effort is very much appreciated. Thanks everybody!

Carlos and Diana Gough were our ceremonial tailwalkers, accompanied by barkrunner Ruby. Carlos has a particularly stylish mask.

Joyce Adams coordinated activities for our Roosevelt Island parkrun friends, who are teaming up with us for the results and the briefing, but organizing their own coffee meetup and check-ins.

And Colin, Andrea, and Tara coordinated the rest.

Drop us a line if you’d like to help with a future CPVp. Being a virtual volunteer is a fun way to support your community, and it definitely takes a village. 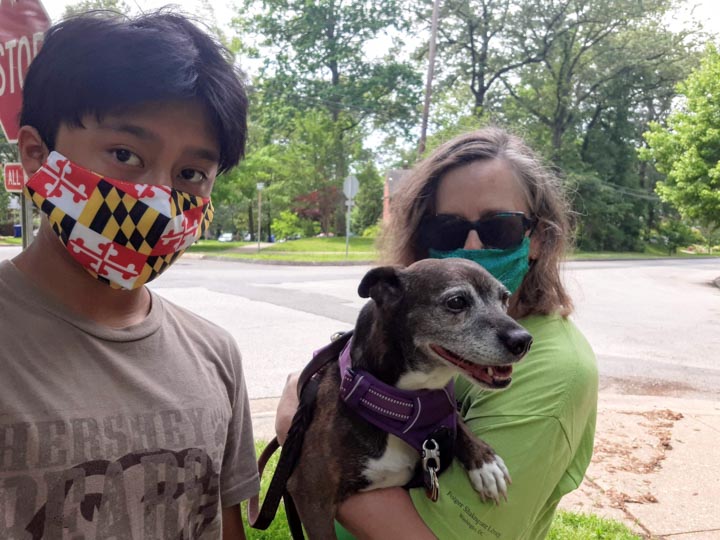 This week's official tailwalkers and tail-wagger

It will likely be a few months before there is any prospect of a return to regular parkruns, alas. There are still no parkruns operating anywhere in the world, including in New Zealand, where the control of COVID-19 has been, um, slightly more successful.

Here is the latest from parkrun HQ in the UK on the status of events.

So we’re expecting to keep parkrunning virtually for a while, making the best of things. We had a GREAT response to the parkrun across America challenge in the last two weeks of May. Many people told us that they enjoyed the collective effort. We’re definitely interested in your ideas about possible future adventures.

Until next week. Stay safe and healthy out there, everybody! 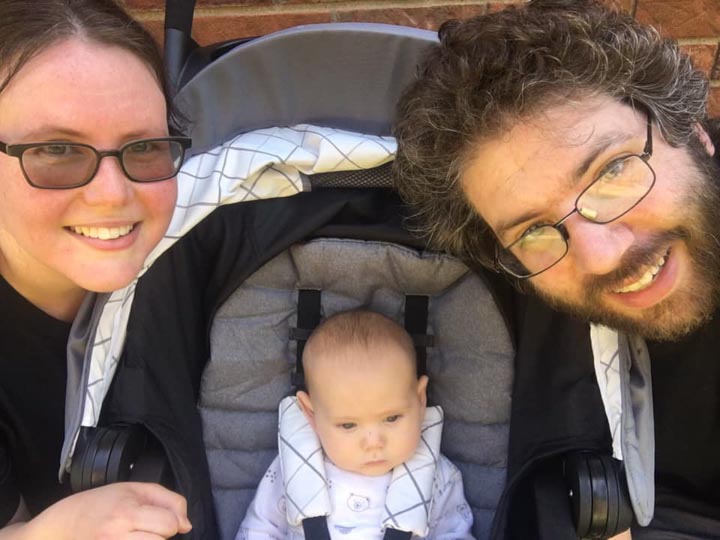 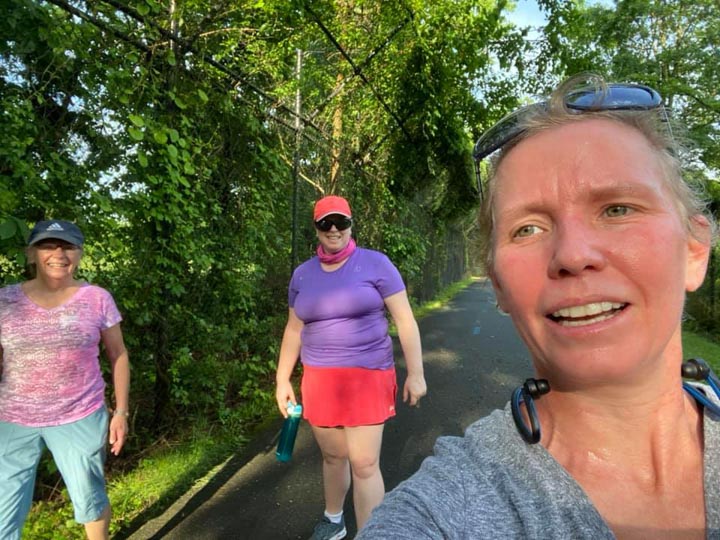 Meridith met Anna and Bonnie on the Paint Branch Trail. Just one of many happy encounters on the trails early Saturday.