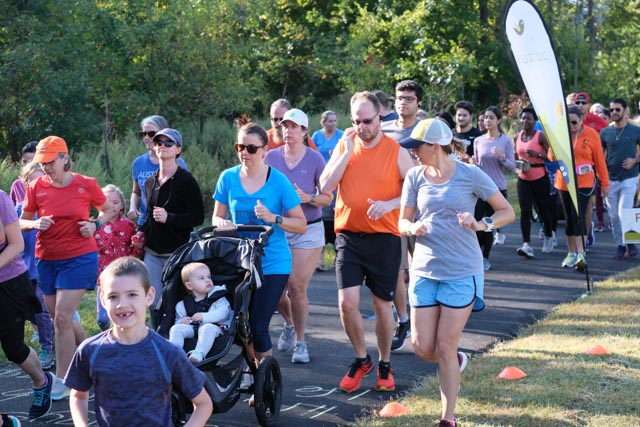 Kath Phillips is one of the most consistent readers of these reports. Despite living on the other side of the ocean. Why so? Because that’s what moms do. And she’s *my* mom

Anyway, Kath has been following us closely from Bristol UK over the past 3 years. And she had been looking to visit again -- last time she was with us was in CP parkrun #2, when we had around 40 finishers. At that time she volunteered, and wouldn’t have dreamed of trying to cover the 5K. But since then she has got two new knees. So she has been looking forward to joining us and trying to walk the course.

And that is exactly what she did! Accompanied by tailwalker Patty Hall, tailwagger Jude, and (on the return) turnaround hero Lisa Wilson. What’s more, this was the first 5K Kath has ever done. At age 75. We were a family of competitive boys, and she went to many, many athletic events in her time. But this was the first time that she has taken part. 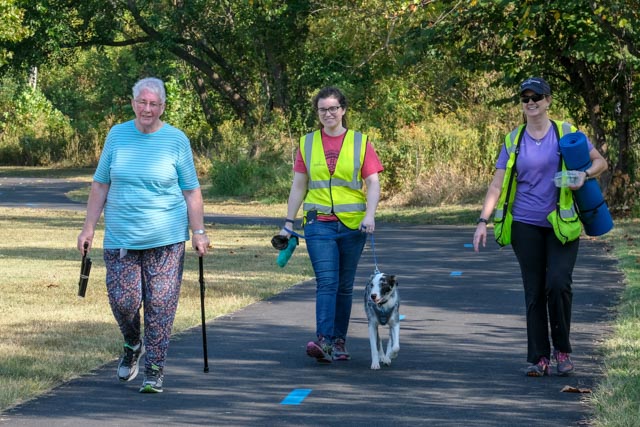 Meanwhile, my dad Derrick also had his barcode ready. He did his first run in maybe 15 years, aside from chasing a young granddaughter down the street. He made it through remarkably well. Derrick is no stranger to running. He took part in the London Marathon a couple of times. But that was when I was in 8th grade. So, a little while ago. 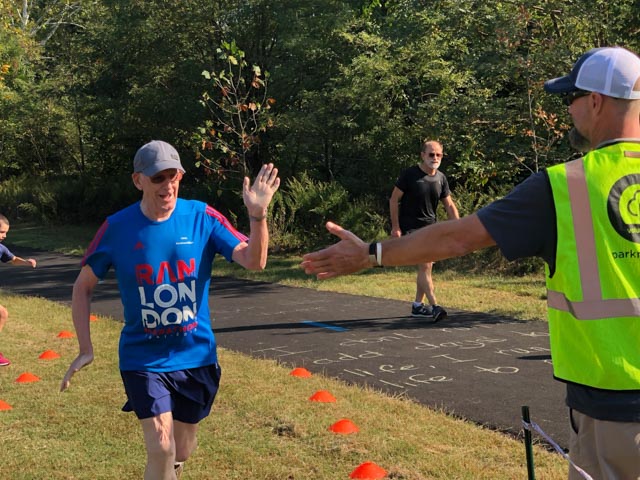 It also bears mentioning that Kath and Derrick joined in partly because they knew how welcoming our CP parkrun community would be. They live in the UK, where there are roughly as many parkruns as there are Starbucks (true fact!). They live around the corner from Little Stoke Park, where Andrea first got the idea of starting this little meetup in College Park. And they have been along to plenty of UK parkrun events as spectators. But they knew that they  would fit right in with us. 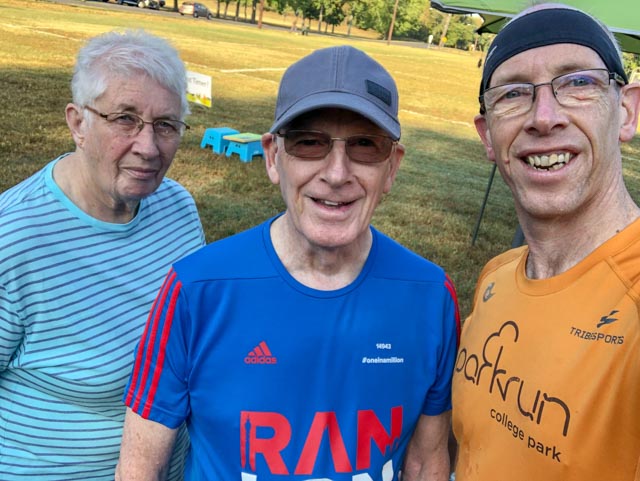 Looking out for each other

This week one of our senior parkrunners got lightheaded towards the end of the run and then fell hard on the ground.

Fortunately, help was close at hand. A group quickly came to his aid. We had a chair and a first aid kit at the ready. And thanks to a call from the volunteer crew there were paramedics from nearby Branchville VFD on site 10 minutes after the fall. The parkrunner was able to leave under their own steam. Stitches were needed, but we expect a return to running fairly soon.

We’re glad that this all worked out well, and we’re also very thankful that so many parkrunners were able to help out so quickly.

But we’re also aware that this could have happened further away from the park, where we would have been able to respond less quickly. Incidents like this are rare at College Park parkrun. But with growing numbers rare events could happen more often. So we’re looking to take steps to ensure that we can remain as safe as possible, especially for more vulnerable members of our community. To this end, we ask two things of you:

And thanks again for being a caring community. One thing we’re very happy about is that more and more seniors are joining us on Saturdays. This week saw more than ever. We hope to see this continue. 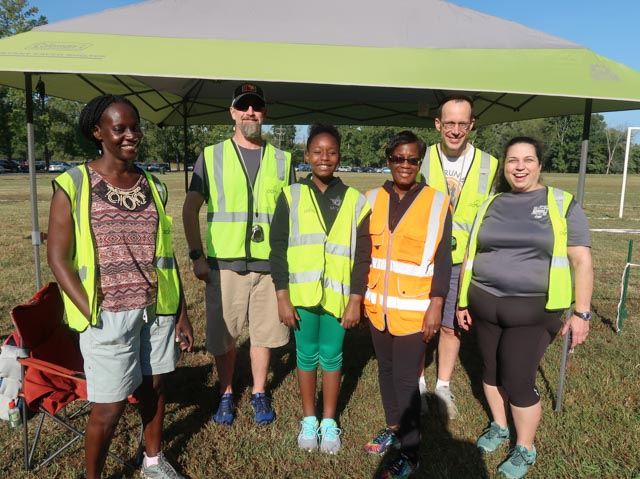 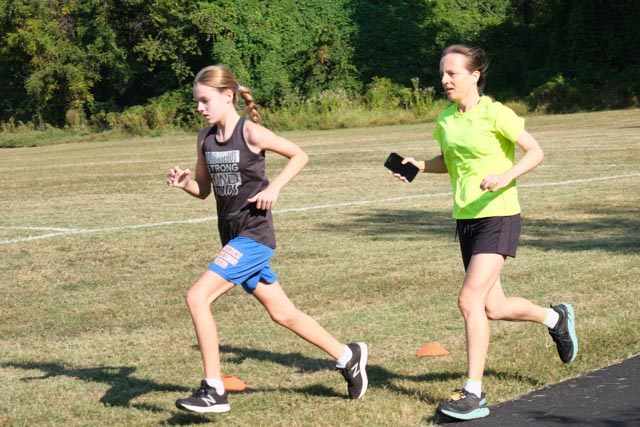 Meanwhile, Team Hayes was at the helm this week. Jacqueline Hayes took her first spin as run director for the day, and everything went off very smoothly, despite the 911 call. And she was ably assisted by daughter Kayla Hayes, a seasoned parkrun volunteer. Thanks, Jackie and Kayla! 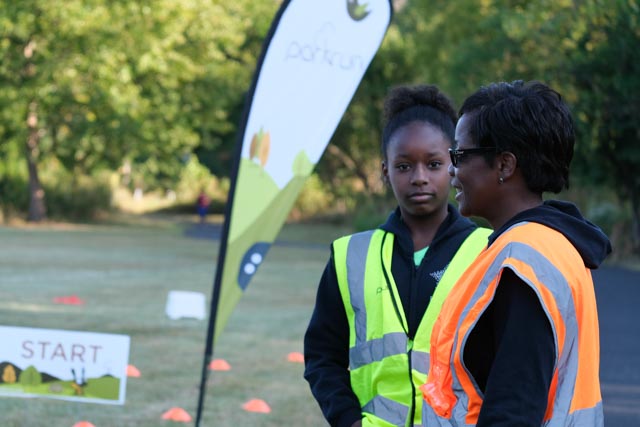 PBs. There were 30 PBs at this week’s CP parkrun. So many! 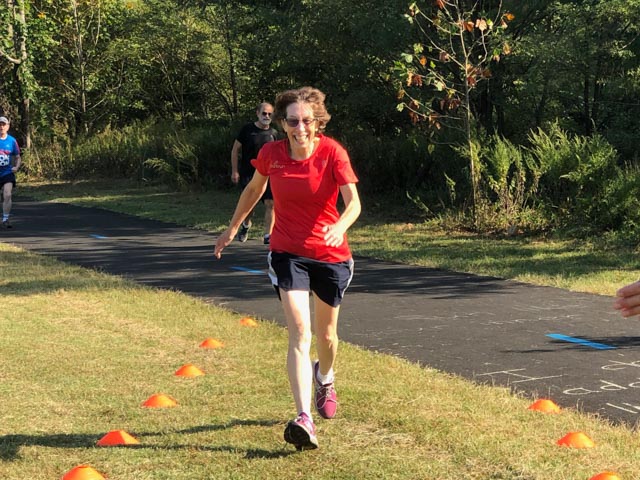 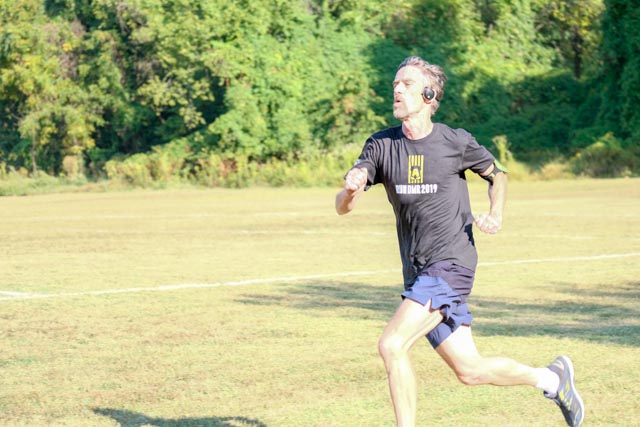 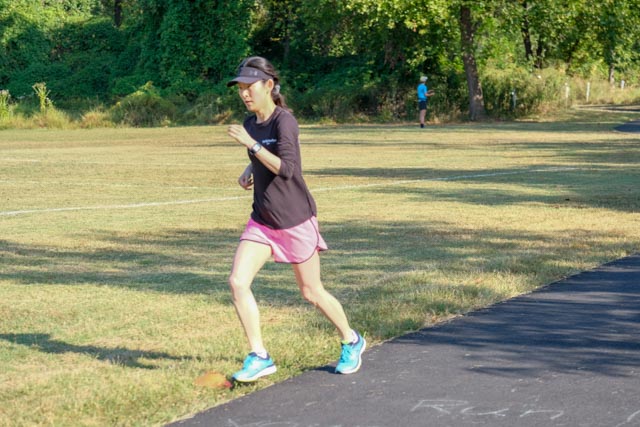 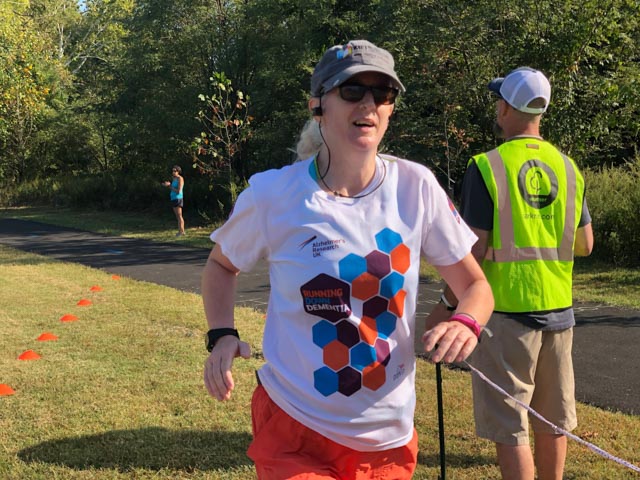 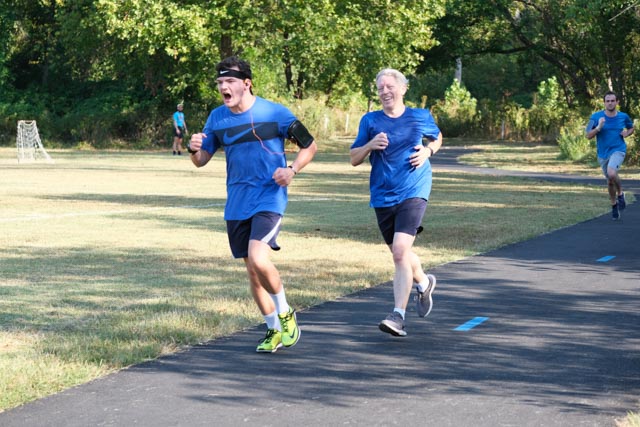 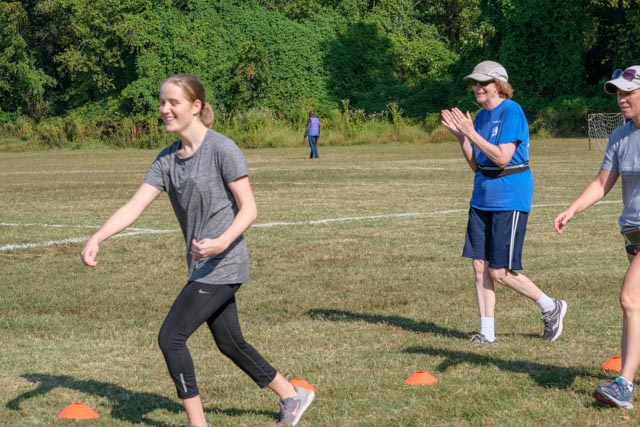 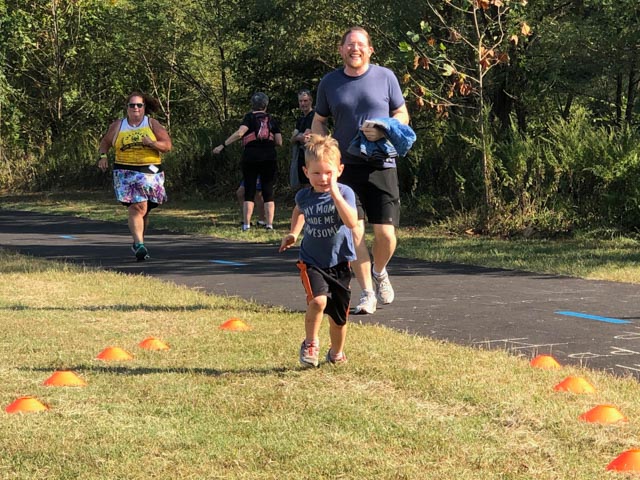 SATURDAY SEPTEMBER 28TH. MUGGLE QUIDDITCH DAY. While most of College Park is freaking out about the Friday night football traffic on 9/27, the busiest day of the year at Acredale Park is the day of the Turtle Cup, a Muggle Quidditch tournament. The parking lots at Acredale Park often fill up early, so you should expect parking to be a little more challenging than usual. Options …

SATURDAY OCTOBER 12TH. Big DMV parkrun brunch after CP parkrun at The Board and Brew. We will be hosting the parkrun USA “ambassadors” for the weekend, together with others from parkrun Global, and we’ll be inviting all to join us at B&B after parkrun. Come meet James Kemp, who’s job is to keep on top of operations for nearly 2,000 parkrun events worldwide every week.

THURSDAY NOVEMBER 28TH. THANKSGIVING PARKRUN. It’s the friendliest (and most affordable) Turkey Trot in the area.

WEDNESDAY JANUARY 1ST. New Year’s parkrun double! CP parkrun starts at 10:30 am. You can sleep in … or you can squeeze in another parkrun at 8:30am. 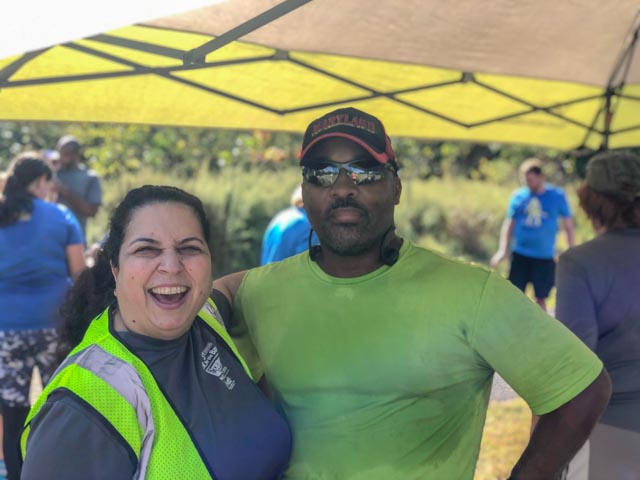 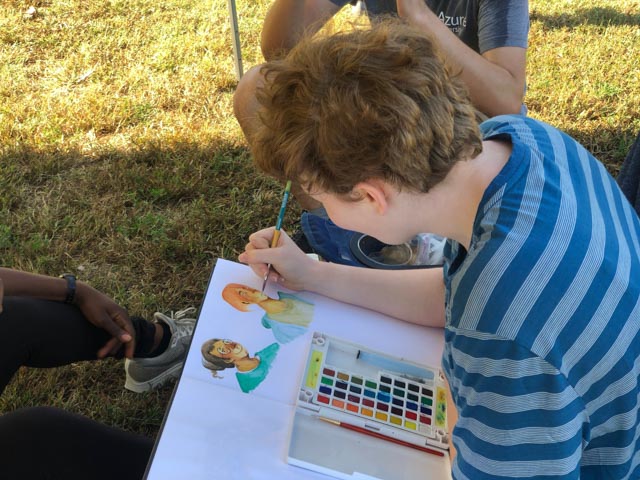 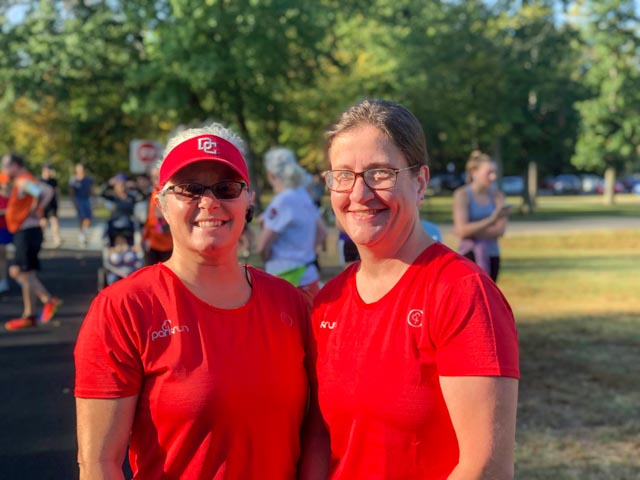