First timer Alfredo Espinoza and second timer Kim Lopez had the good luck to run CP parkrun #154 alongside stalwart Misha Bernard. They weren’t the first parkrunners that Misha left a strong impression on. Alfredo noticed that Misha was cheering for other parkrunners along the trail. But he was especially impressed that she seemed to know everybody’s name. 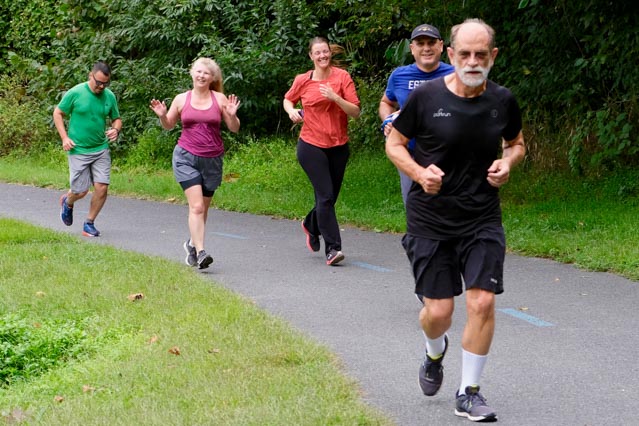 We want you to bring your barcode, but you’re definitely more than a number at CP parkrun. As the community continues to grow, we can’t promise that we’ll remember your name on the first try. But we really are happy to see you, and to see you come back, and eventually we’ll get the hang of your name. And some of us, like Misha, get there faster than others. (Thanks, Misha!)

One name that we won’t forget in a hurry is Abdur Rahman-Quadri, who was back in College Park to celebrate his 50th parkrun this week. For a long time Abdur lived closer to the park than *anybody*, closer even than Hump and Lisa. After moving from Nigeria to pursue an engineering degree at UMD, Abdur discovered this cool weekly meetup that was happening literally under his nose. And in addition to running he would volunteer every Saturday during the month of Ramadan. Recently Abdur graduated and moved to Baltimore, where he became a regular at Leakin Park parkrun. But for #50 he wanted to come back “home” to CP. We were very happy to see him. 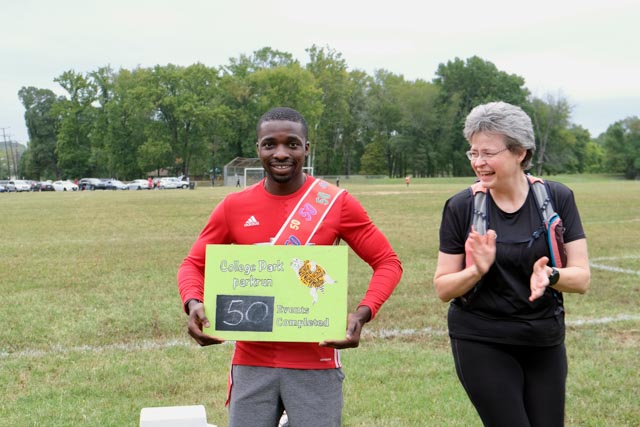 In fact, Abdur was so happy to hold our terrapin “Patronus” board that he wondered if he could carry it with him on the whole 5k. Never mind, he went and set a PB instead.

We had other milestones to celebrate. Diana Gough wore the purple superhero cape, as she was volunteering for the 25th time. A snazzy purple parkrun V25 shirt will be on its way to her soon. It’s Diana’s favorite color, too, so she can take turns wearing that shirt and the red 50 shirt that she already earned a couple of months ago. 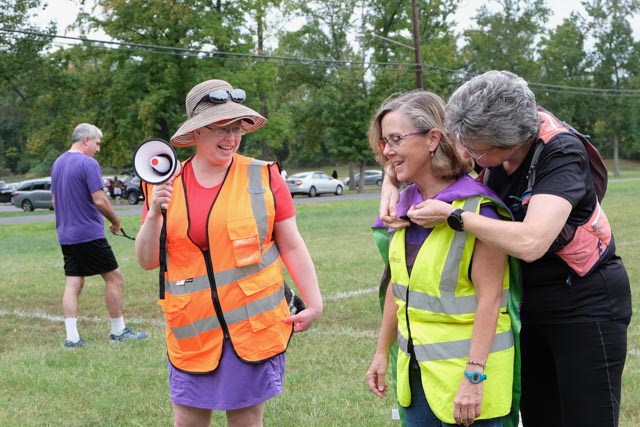 Speaking of red and purple shirts. Look who were the cover girl and cover boy for this week’s parkrun USA roundup of pictures and stories. Diana’s son Carlos, looking good in his new parkrun 50 shirt. And Xander Mease’s grandma Janet Tate, who was completing her 30th run with us. 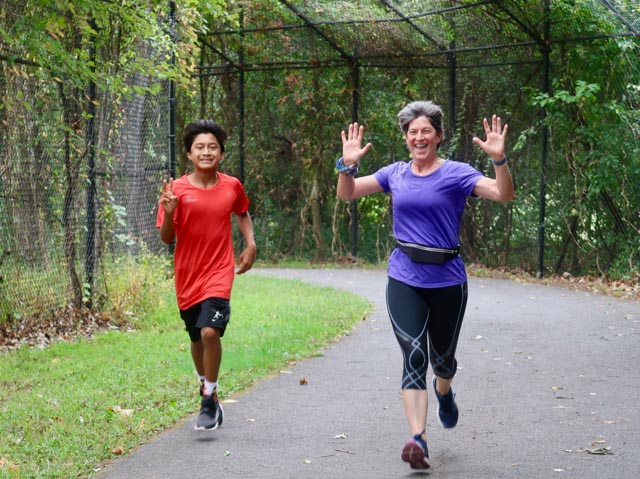 And there was one more milestone that we missed! Kim and Taylor Nickens snuck in a little after we started, and for Taylor it was her 10th parkrun, an official milestone for under 18s. Sorry that we didn’t notice this until afterwards, Taylor. We’ll give you a shout out the next time that we see you at the pre-parkrun briefing. 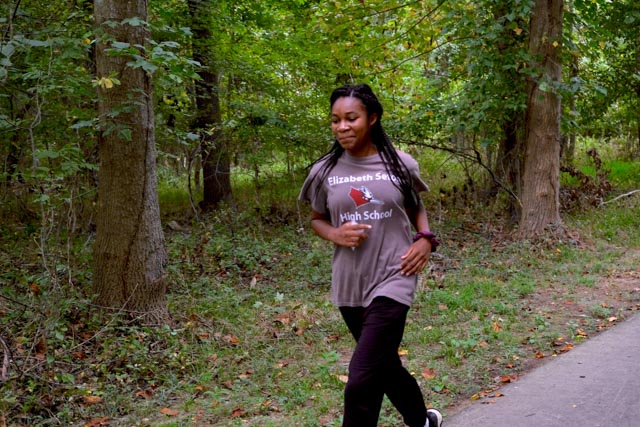 One of the first-timers was Judy Meyer. Judy normally lives far away, but she’s in the area for a while because she recently became a grandma. And she found us, too! By a stroke of luck, she was also the same pace as Judy Barnes, who was completing her 78th parkrun. A good time was had by all. 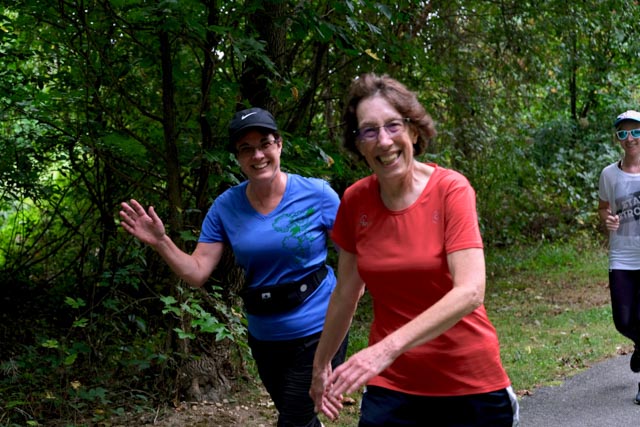 Another first-timer was Megan Newcombe. She and husband Pratyush are recent transplants to CP, and Pratyush has already run with us a couple of times. So happy that you could join us too, Megan. (And she speaks the same language as me, just sayin’.) 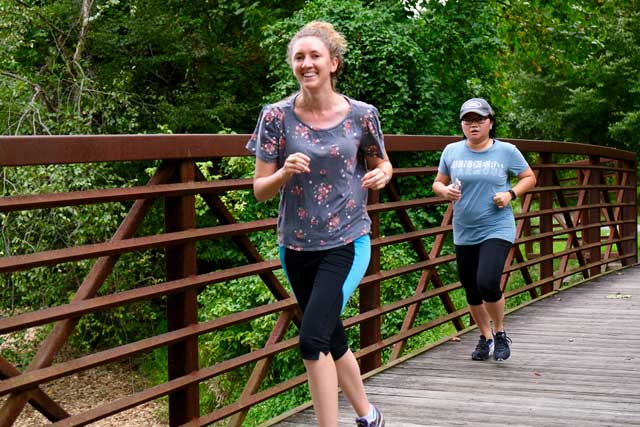 We had amazing hint-of-fall weather, so it’s little surprise that one or two PBs were set this week. Well, there were 30 in total. Of particular note are the PBs by Marvin Russell, on his 112th parkrun. When you have done that many parkruns and have been battling injuries for a while, this isn’t so easy. And John Ramsey also set a PB on his 112th parkrun. When John first joined us he was completing the 5k in 31 minutes. Now he’s pushing to dip under 24 minutes. Nice! 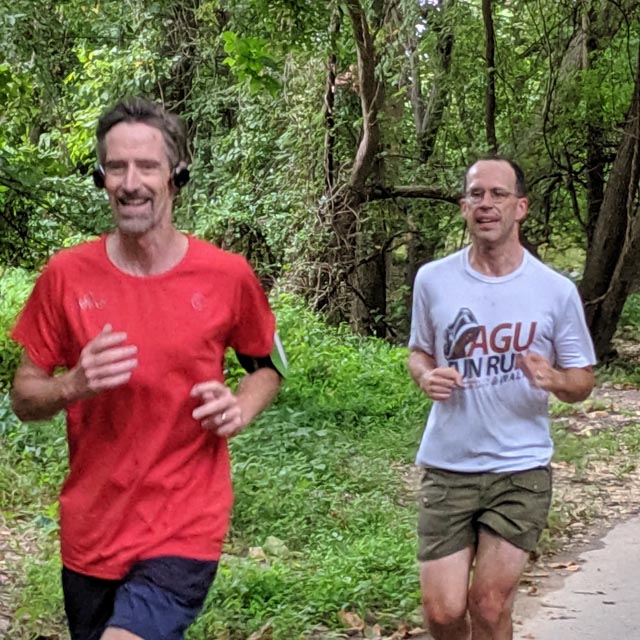 There was a time long ago when John Ramsey was setting a PB every week. After so many parkruns, that just isn’t happening any more. But somebody who is still in that phase is Marianne Poon, who this week did her 5th CP parkrun, and in doing so set her 5th PB. Wow! 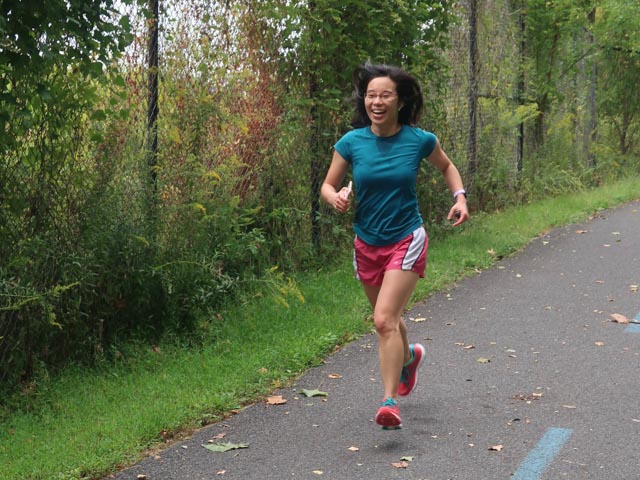 Andrew Widman must be doing something right, as he took another big chunk from his PB this week. 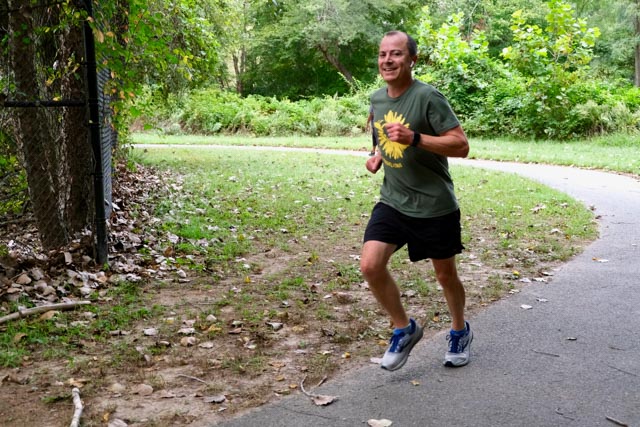 I’m really not the person who should be handing out kudos for parkrun fashion choices. I really have no clue. But I feel compelled to give a shout out to Gwyneth McEllhenny for a truly outstanding hat. 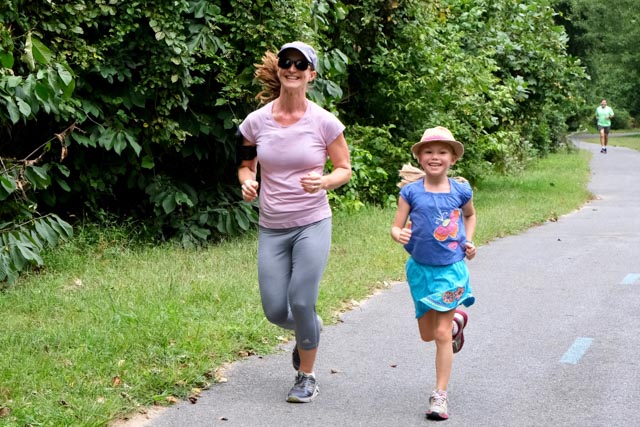 In mini-milestone news, we had two people completing their 5th CP parkrun: Marianne Poon and Liam Edmonds-Moore. (Liam has done a few others, as he has been to Kensington and Fletcher’s Cove parkruns a few times.) 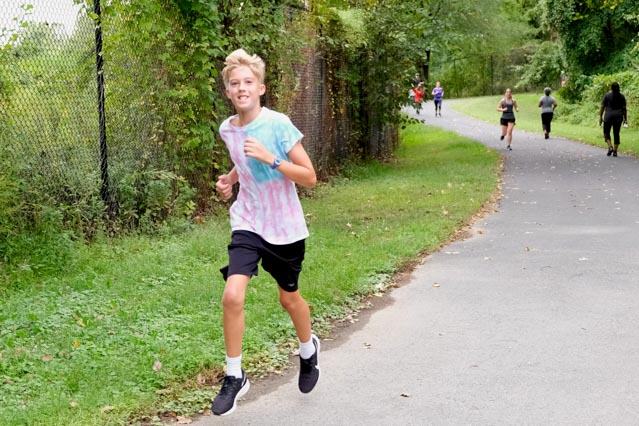 And Lucy Younes and John Jensenius completed their 25th CP parkrun. Great stuff, guys! For Lucy she’s already half way to earning her 50 shirt. For John he’s already the proud owner of a black 100 shirt, as he did rather a lot of parkruns in Oxford, UK before moving to CP. 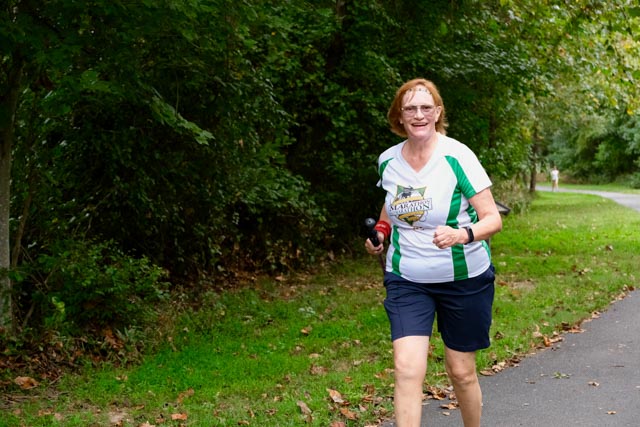 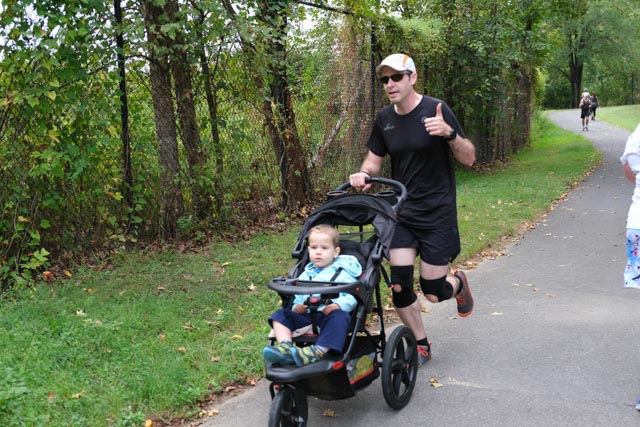 We have a special shout out this week for Saul Goldberg, who took on the Hump for a Day role. Hump wasn’t able to fill his regular role, so Andrea drafted Saul at the last minute to replace him, dispatching him down the trail to take care of business. Saul did great … and for his efforts he was rewarded with an escort to the finish by tailwalker Külli and turnaround marshal Lisa. 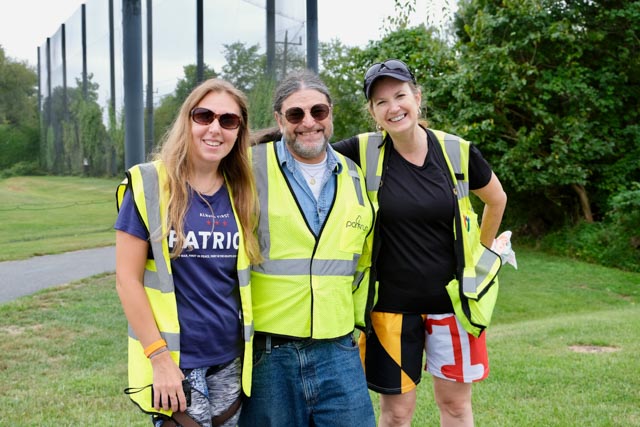 The rest of this week’s volunteers were Jim Cantwell, Külli Crespin, James Edmonds-Mooree, Diana Gough, Tomas Marambio, Steven Moore, Zoe Phillips, Valerie Silensky, Alexander Swisdak, Pratyush Tiwary, and Lisa Wilson. This was all under the expert direction of Run Director Anna Tinnemore. And Andrea Zukowski did her magic in various ways. And I did a little propaganda here and there.

In fact, although I was volunteering, I wasn’t in College Park at all. I was working in Berlin, Germany, and faced the dilemma that I wanted to go along to the local parkrun, but I had work meetings starting at 9am. Ack! 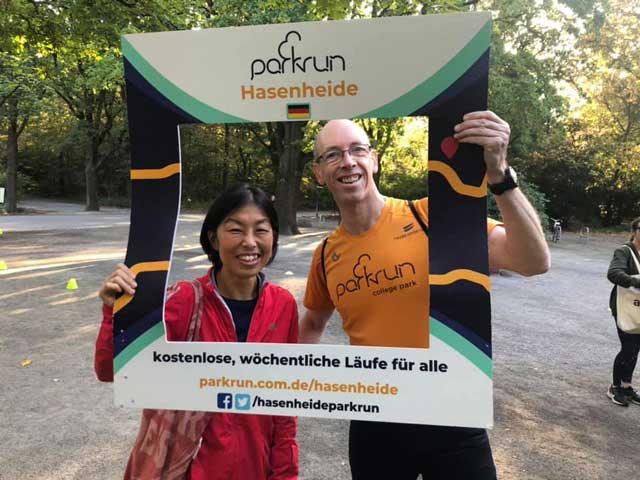 I decided to throw caution to the wind, and went along to Hasenheide parkrun, together with a mix of Germans and British visitors, plus a few visitors from Oregon. I completed the parkrun, then with a run, a taxi, a shower, and a walk I was able to get to the meeting, looking relatively respectable, by 10:01am. And I had a great time at Hasenheide parkrun. 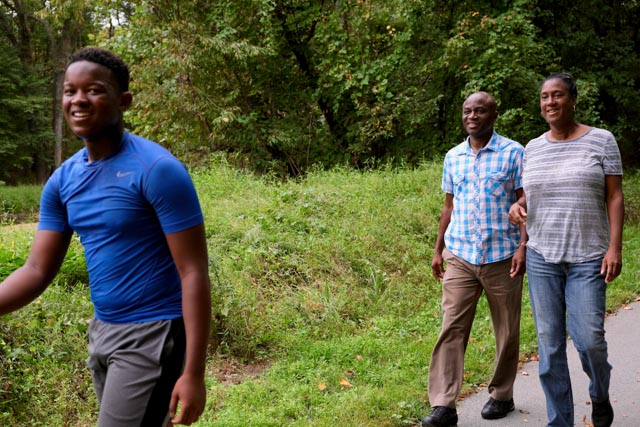 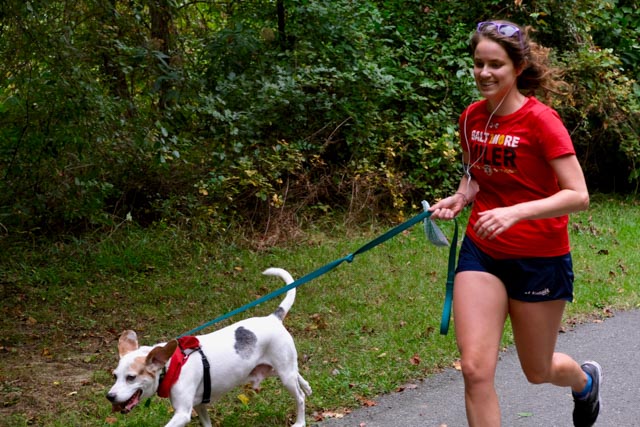 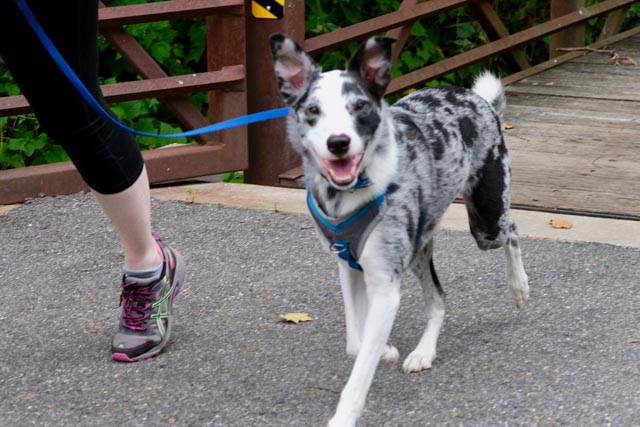 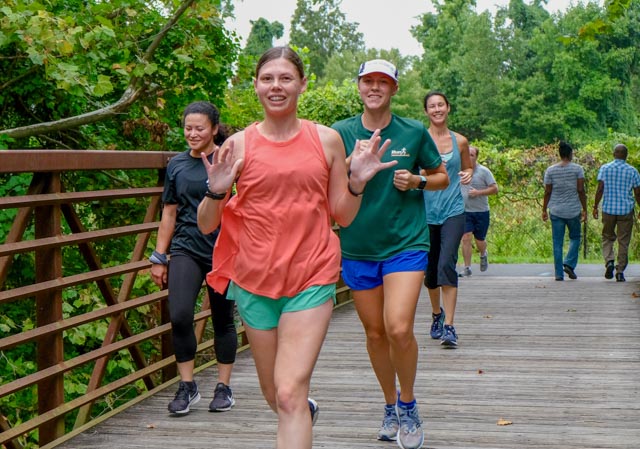