College Park parkrun is a free, timed 5K run/walk, staffed entirely by volunteers, held each Saturday morning at 9:00 at Acredale Community Park, 4200 Metzerott Rd., College Park, Maryland. The event is one of 35 similar events organized by parkrun USA, the US branch of a global parkrun organization that coordinates some 1900 weekly events worldwide.

The 144th installment since College Park parkrun’s October 2016 launch, this week’s event was held in swamp-like conditions, staffed by 16 dedicated volunteers under the direction of Run Director Yancira Amaya. 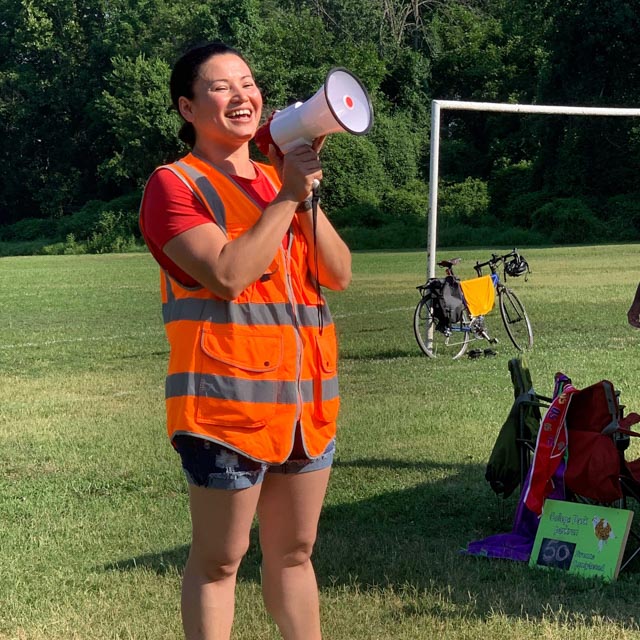 The guest of honor was Mike McClellan, 82, of College Park, who completed his 50th parkrun, an accomplishment regarded as a major milestone in the parkrun community, and an impressive feat at any age. Sources report McClellan is only the second octogenarian to accomplish this milestone within parkrun USA. McClellan’s press secretary claims the fact that his 50th event occurred on Octogenarian Celebration day [https://blog.parkrun.com/uk/2019/05/20/octogenarian-celebration-day-2019/] was pure coincidence. McClellan’s accomplishment earned him a red milestone t-shirt and the opportunity to run in the ceremonial beauty pageant 50 sash. 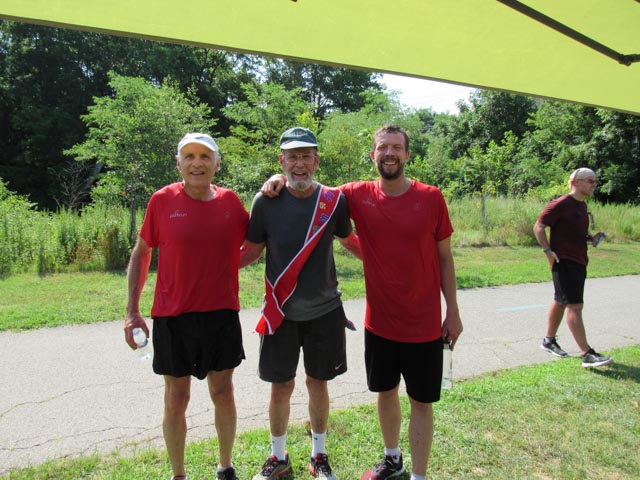 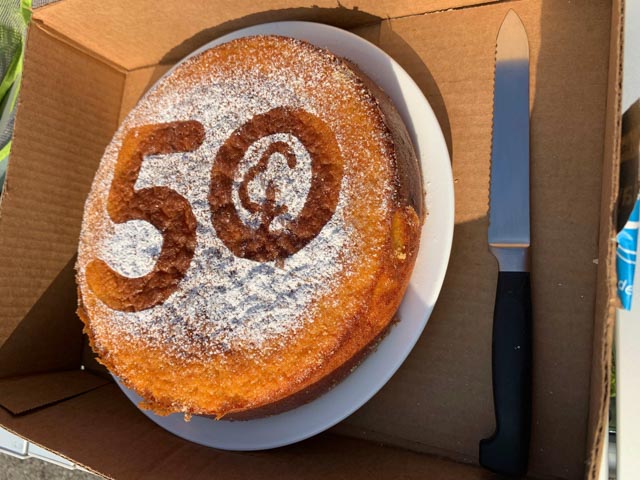 One local pundit, who declined to be named, suggested “the sash would look better on Bonnie,” presumably a reference to Bonnie McClellan, 79, who completed her 38th parkrun this week. 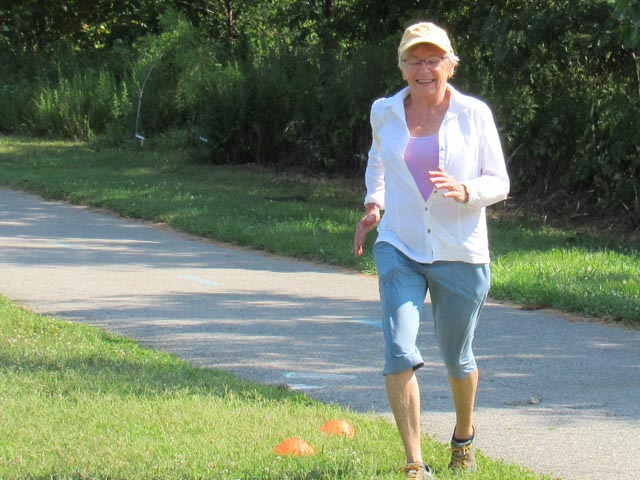 The event also attracts a loyal crew of volunteers, such as Win Persina of Washington DC. Frequently seen in parkrun’s iconic yellow vest—when not staying up all night at a chess tournament—Win’s stint as timekeeper this week marked her 25th occasion as volunteer. This milestone earned Ms. Persina a coveted purple milestone t-shirt and the opportunity to wear the ceremonial purple superhero cape. 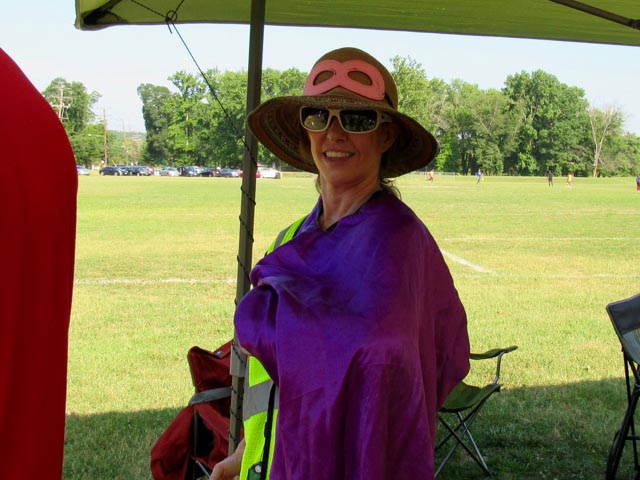 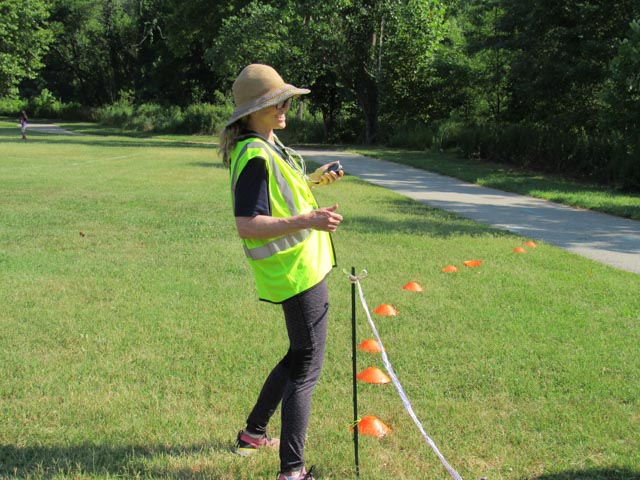 McClellan and Persina are just two of many parkrun regulars who ran, walked, or volunteered at this week’s event. McClellan was one of twenty participants in this week’s event who have crossed the parkrun finish line 50 times or more, some of them over 100 times. College Park regular John Ramsey ran for his 100th time in College Park this week. 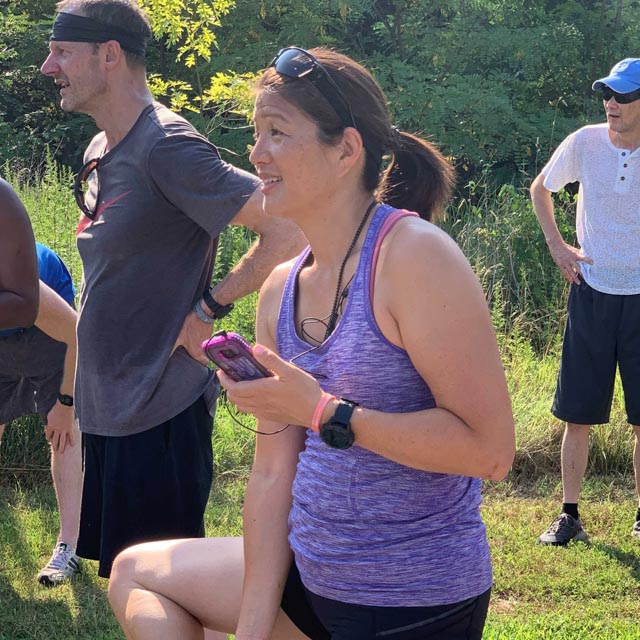 Participants Sophie Oriani, Kim Nickens, Richard De Angelis, and Rebekah Esmaili each completed their fifth event this week. Apparently 5K in oppressive heat and humidity is not sufficiently challenging for Ms. Oriani, who brought along a few friends for a ride. 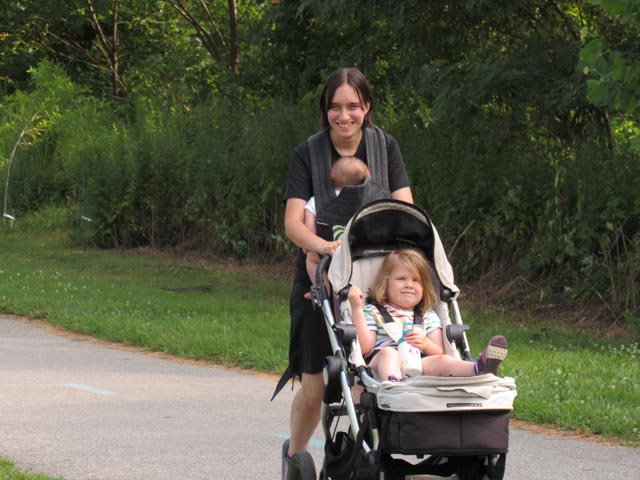 Event co-director Andrea Zukowski made newcomers feel welcome and instructed them in the finer points of parkrun etiquette. 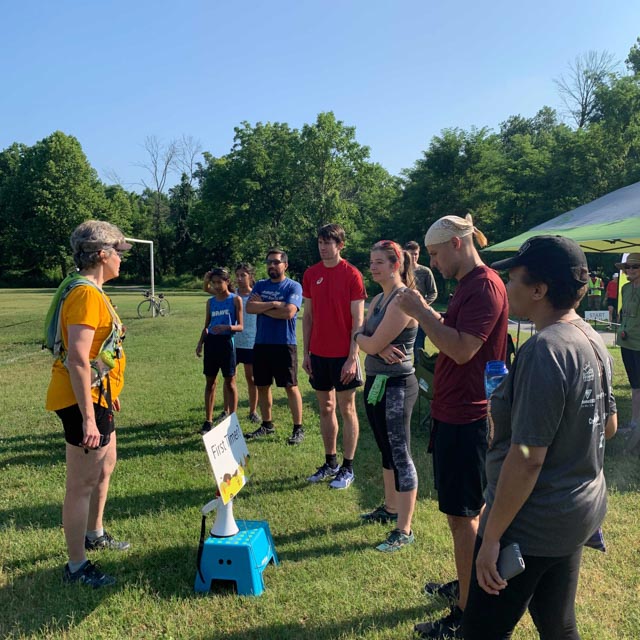 This week’s newcomers came from far and near. First timers, Jorge, Jessica, and Sofia Martinez came all the way from Albuquerque, New Mexico. Formerly locals to this area, sources say they are considering moving back. 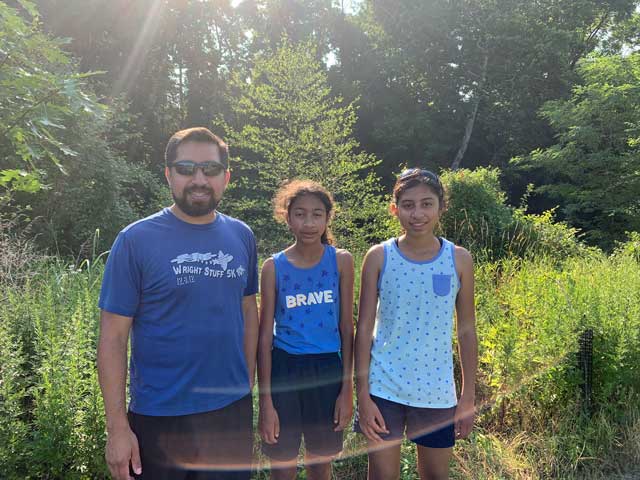 First timer Zebi Brown, a graduate student at nearby University of Maryland, claims she intends to use parkrun as cross training for her newfound passion, Roller Derby. Others are betting before long she will be thinking of Roller Derby as cross training for parkrun.  One of this week’s volunteers reported thinking that Zebi was already part of the parkrun family, remarking that “Zebi rings a bell.” 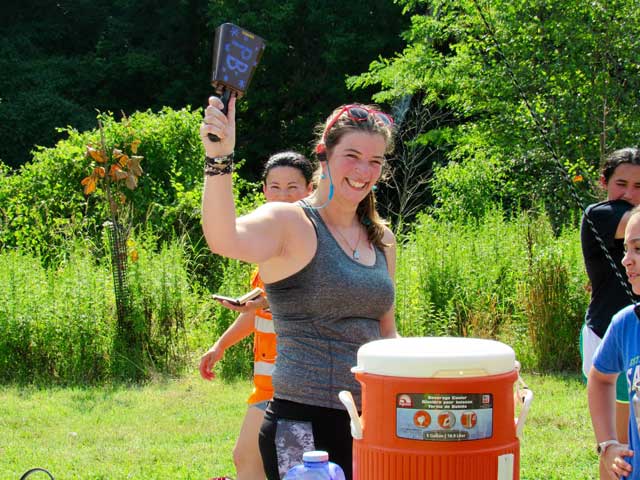 First timer Rick Cruz is another local. Intending for some time to try the parkrun, he finally made it out this week. Had he made it earlier, the weather might have been more inviting. Volunteers report that Rick admitted having a fun time despite the humidity. 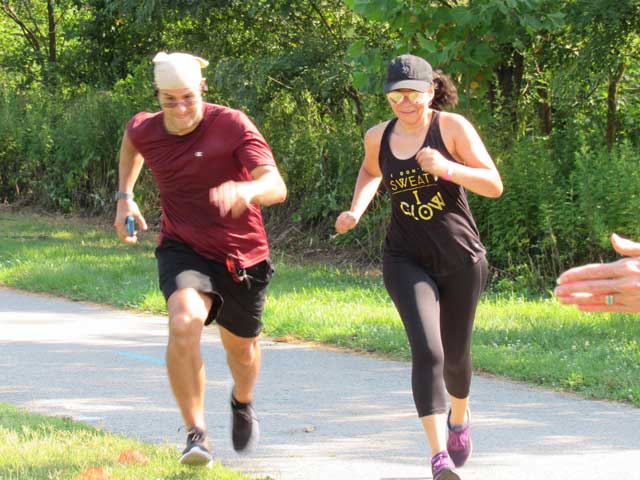 Veteran parkrunner Andrea Block has attended College Park parkrun every week without fail since June 29, 2019.  Today she was accompanied by a friend this roving reporter vaguely remembers might be named John. Editor’s note: In order to get a time, you must register in advance and remember to bring a printout of your barcode. 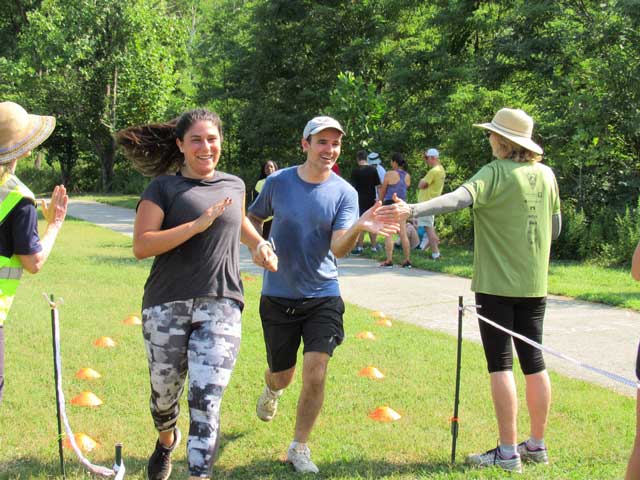 Mark Henderson, first-timer at College Park, is no stranger to parkrun. Registered at Coburn parkrun in Melbourne, Australia, Henderson has shown a penchant for tourism, having completed 149 parkruns in 78 different locations. Unnamed sources say with the completion of this week’s event, Henderson has “traveled the seven C’s” and earned the right to call himself a “parkrun pirate.” 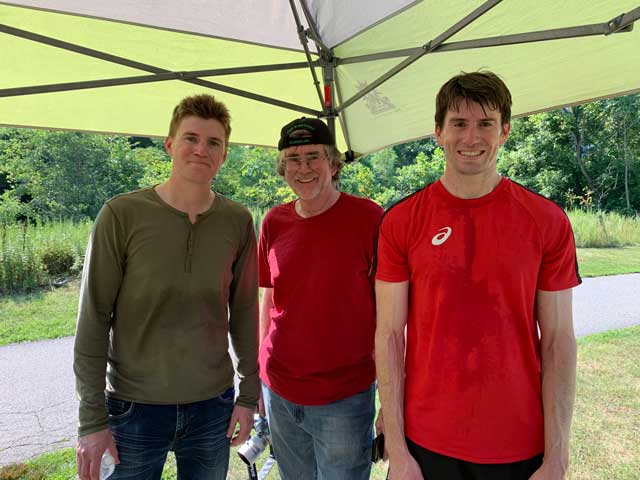 On the surface, the College Park parkrun community appears to operate a bit like a big happy community, all cooperation, no dissent in the ranks. But this correspondent has detected elements of rebellion. A case in point, contrary to DIRECT ORDERS from the event director and run director to “take it easy” in the heat, delivered in two languages at the opening briefing, no fewer than EIGHT returning participants set new “Personal Best” times this week. Sources say this rebellion may have been fueled in part by visitors from a neighboring parkrun.

Notwithstanding this evidence of latent rebellion in the ranks, in this reporter’s humble view, College Park parkrun shows all the signs of a vibrant, thriving, event. 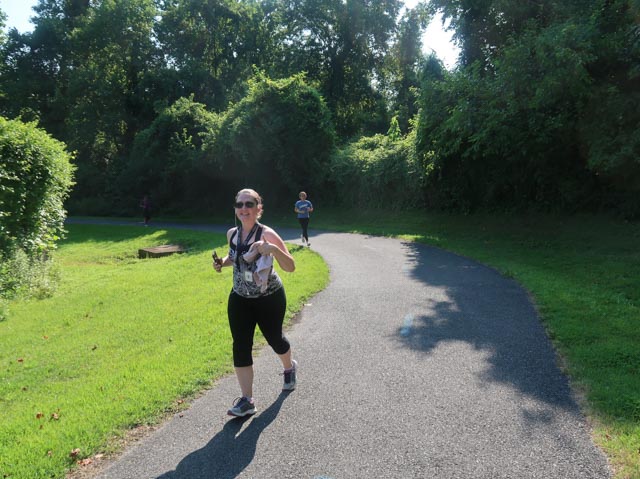 Erin Schneider, just a few weeks after giving birth, left the rest of the family behind her on the trail and enjoyed a (hot) run 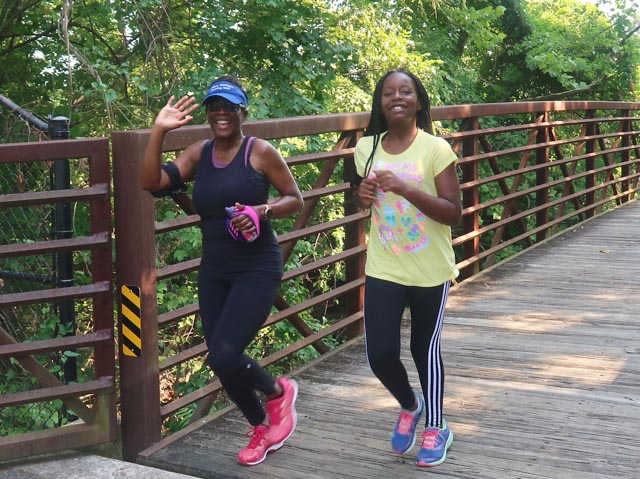 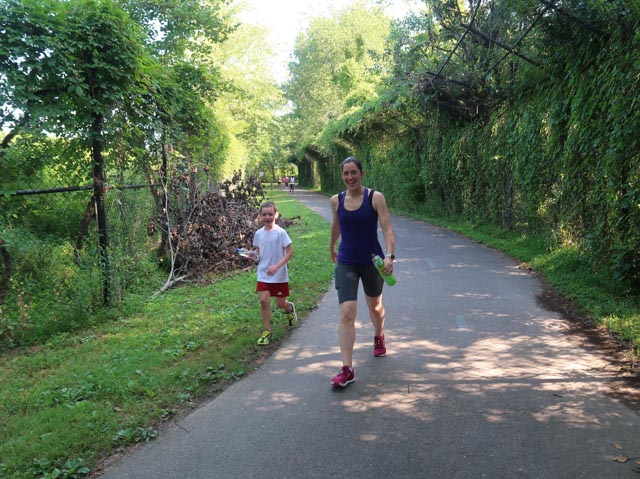 If even Xander and Tara can stop for a walk on a hot day, you know it's a good idea! (They also scored a 'groundhog' this week, for finishing in the same time two weeks in a row.) 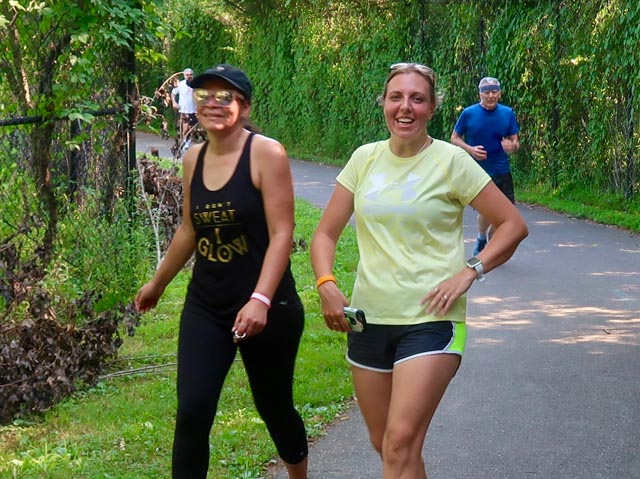 When your regular parkrun buddy is busy being run director -- Teresa teamed up with Külli this week. Like many others, they sensibly took things slower than usual in the heat 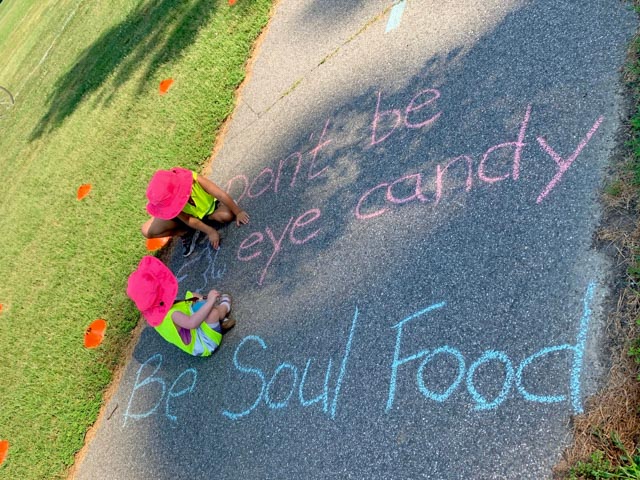 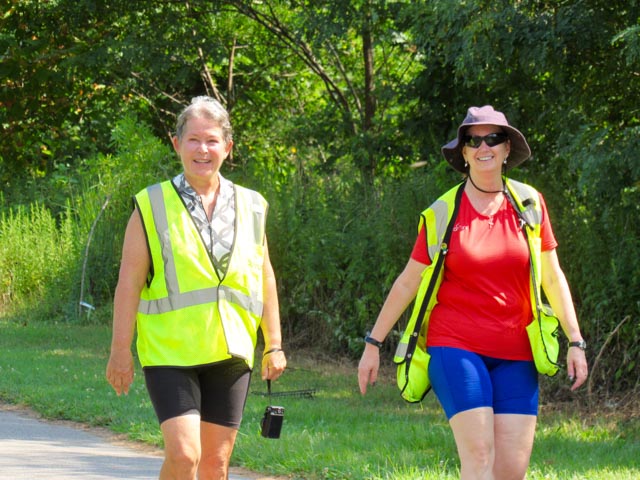 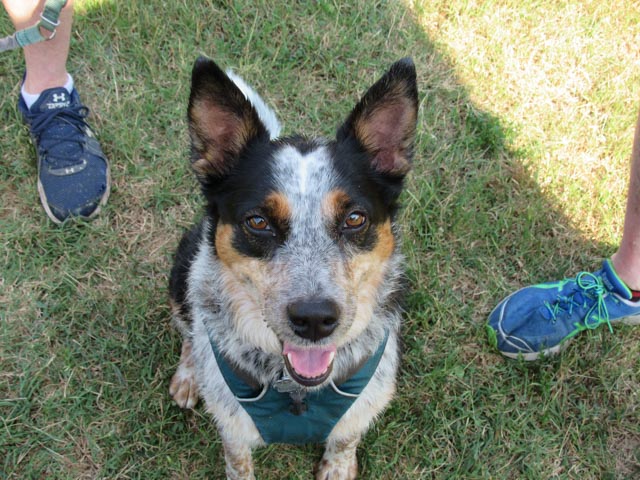 48th parkrun for Scout and her human Ken. Do we have a barkrunner-sized sash? 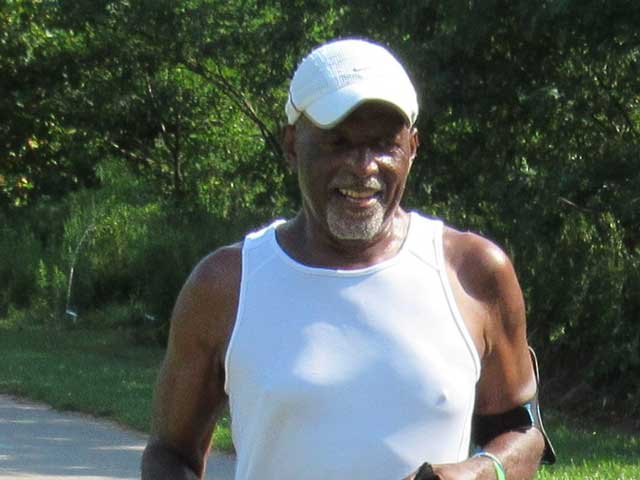 William Scott visited us from Anacostia parkrun. Welcome! We are impressed that he came to College Park by bike.

Finally, at last week’s event (June 29), a single turtle was spotted by the side of the trail. According to College Park parkrun’s resident naturalist, this week’s first timers included a box turtle and an eastern king snake. The word is out. If parkrun continues to grow in popularity in reptilian circles it has in this community, Paint Branch Trail may soon be overrun. 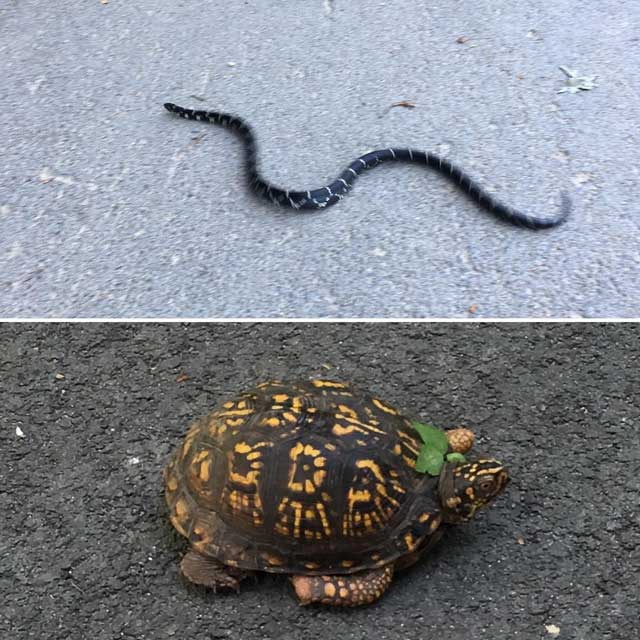 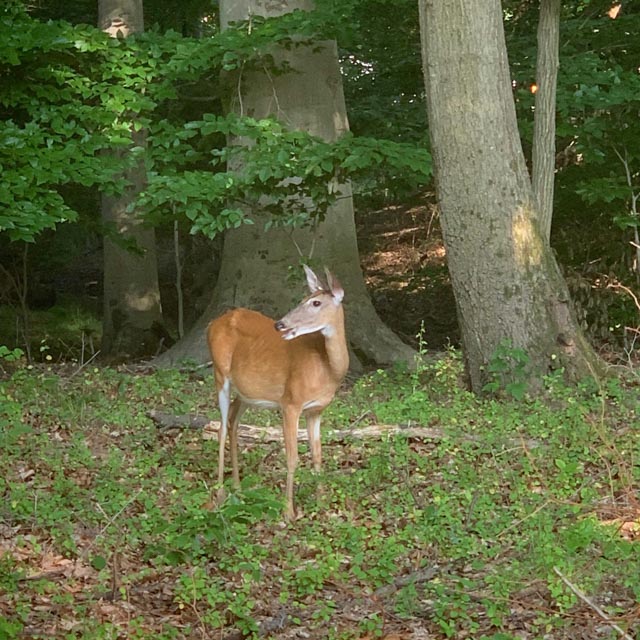