It was a busy, busy day at Acredale Park this Saturday. And not just because we welcomed a crowd of nearly 200 runners, walkers, volunteers, and supporters to College Park parkrun #140. 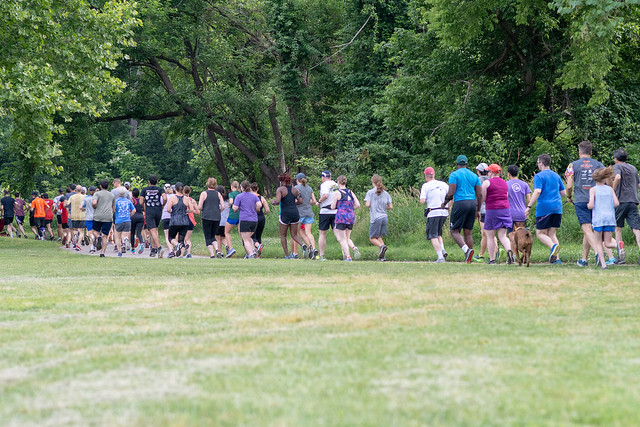 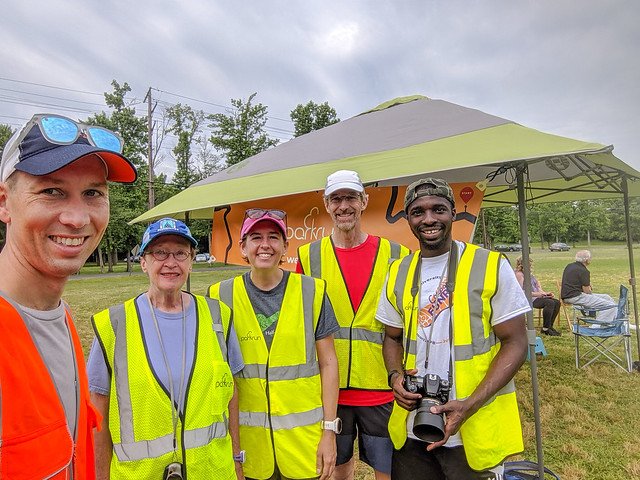 Sheilah Kast is one of the regular parkrunners who volunteers to help coordinate the free weekly Yoga in the Parks program with Prince George’s Parks. This week saw the start of the summer season. Every Saturday 10am. Just show up. Bring a mat if you have one. 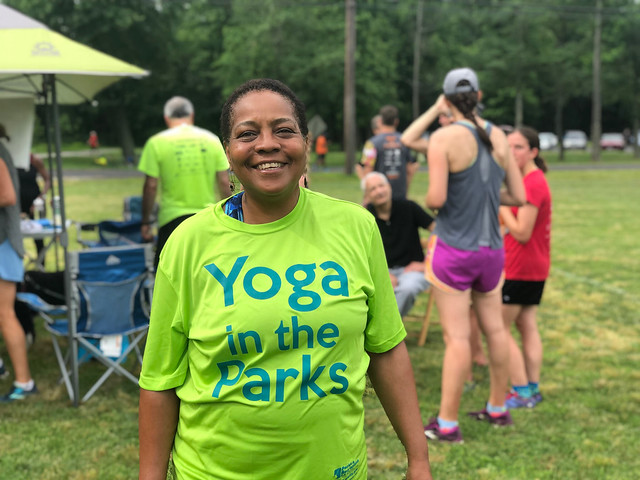 And many parkrunners also helped out as volunteers with our first Trolley Trail Run. 6K from parkrun to Franklins Brewery, following the Paint Branch Trail and then the Trolley Trail through College Park, Riverdale Park, and Hyattsville. Thanks to Lori Dominick, Sam Phipps, Chris McGranahan, Debbie Levenson, Kathy Zentek, Janice Bernache, Valerie Silensky, Colin Phillips, and Andrea Zukowski. Plus the 30 intrepid souls who gave this new event a try. Most of them had already completed the parkrun. And in the case of Sam and Janice, they had just set a parkrun PB! 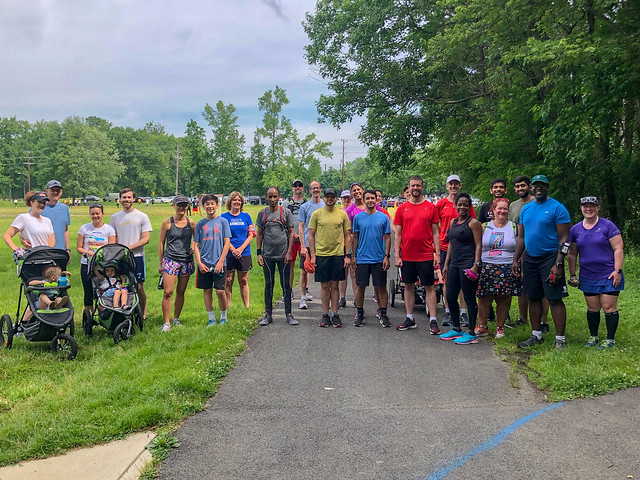 Rebecca White also joined at finish line support and brought along a special barkrunner guest, Olivia to help sort tokens. Rebecca was also kind enough to bring along some muffin treats that were gobbled up by hungry parkrunners as they finished. Thanks Rebecca! It’s a treat having you a part of the community. 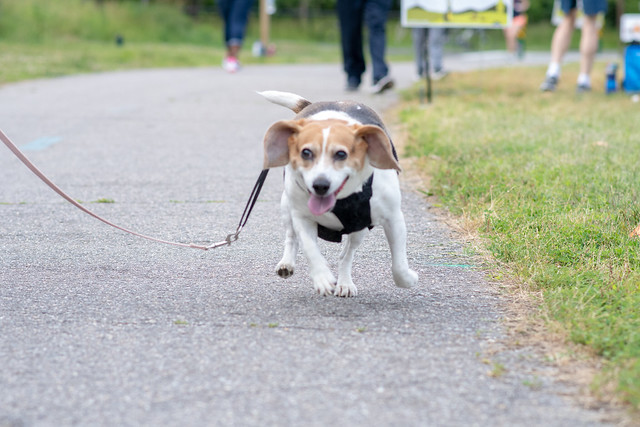 This week we had a lot to celebrate! Joel Goldberg and Paul Wester celebrated their 50th parkrun, and wore the coveted red sashes during the parkrun – congrats! Joel, who ran four miles prior to the parkrun, is preparing for his first Olympic Distance Triathlon on June 15th in Cleveland. Good luck, Joel! Paul shared that this was his first time wearing a sash since Boy Scouts. You wear it well, Paul! 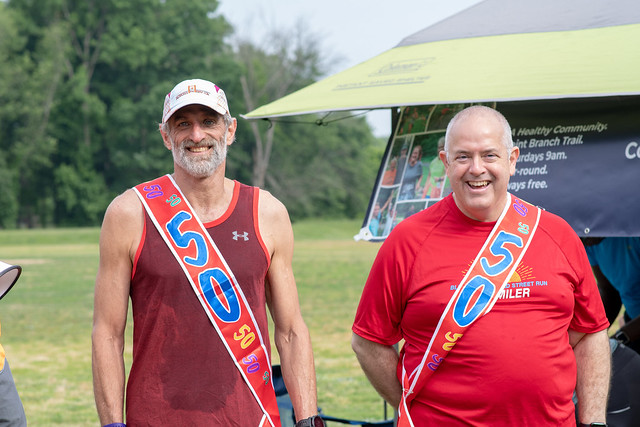 Nick Huang, who has been an integral part of College Park parkrun since before it started, just finished his PhD this week, is getting married next weekend, and is moving away. Yes, he has been busy, but not too busy to join us this week as a parkrunner and volunteer. After finishing his run, he jumped in to help Jen with barcode scanning. We needed it this week with 174 finishers! Nick has always stepped up to the plate for our community, and he will be dearly missed. We wish him a great journey with many return visits! And we sent him on his way with a fancy College Park parkrun apricot shirt to remember us by. 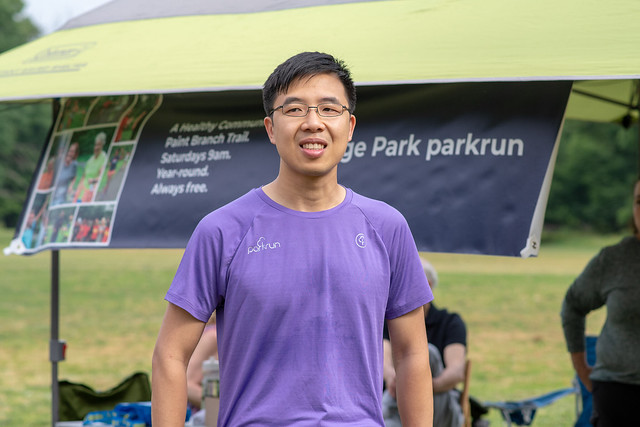 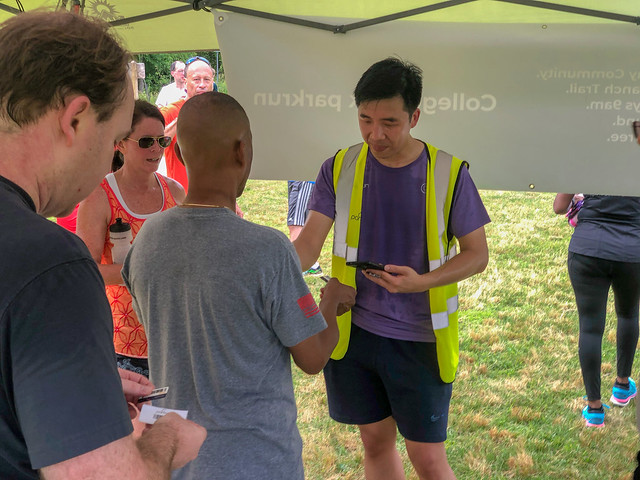 We had several first timers this week, including Desiree and Andres, who came with their trainer, Vernon. Ken Mason joined us also for his first ever parkrun. It was a nice trip down memory lane for Ken, too, as he grew up not far from our starting line. 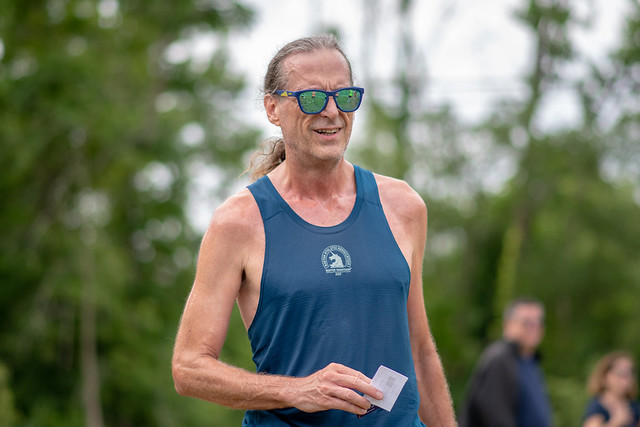 Members from the Hope Lutheran Church joined us as well! They chose College Park parkrun as their June social -- great idea! And pastor Julie got to enjoy a run with college friend Joyce, who abandoned her own “congregation” -- she’s event director at Roosevelt Island parkrun -- to join us for the parkrun and the Trolley Trail Run. 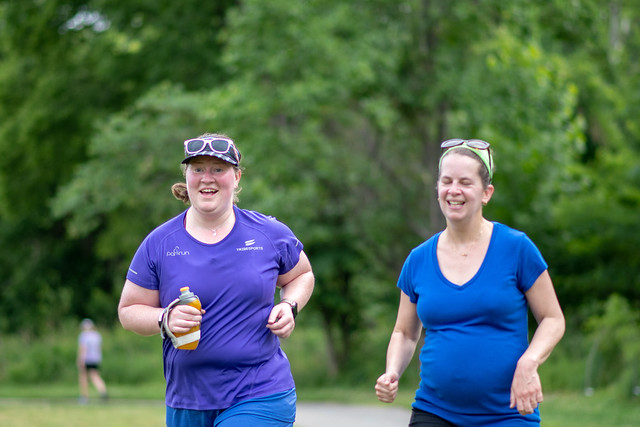 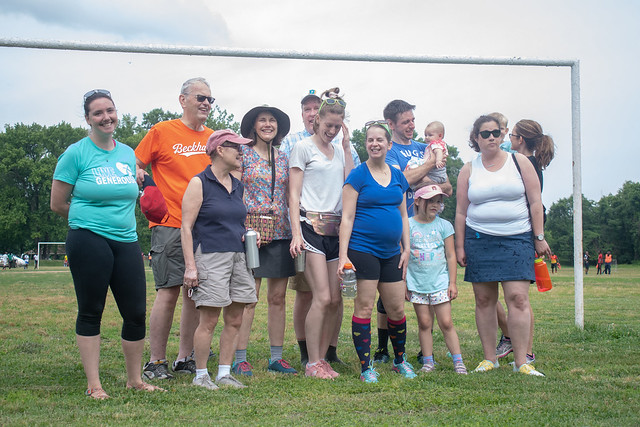 Susana and Jorge were visiting from Santiago, Chile, to watch their son, Tomas Marambio. Pete Monacelli brought his parents along too. As did Dale Morey, whose mom Gloria I had the pleasure of meeting. 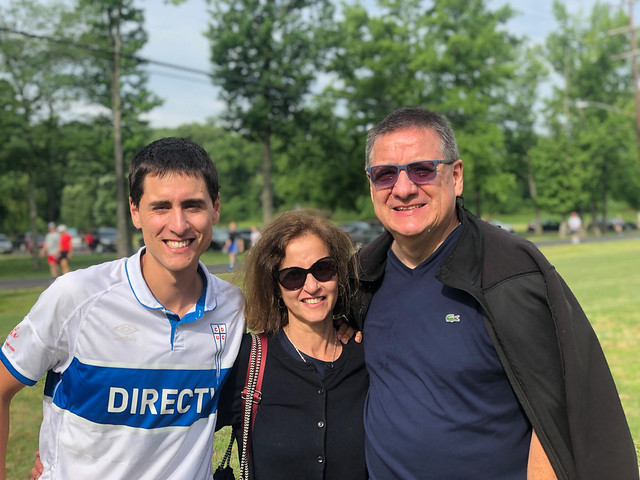 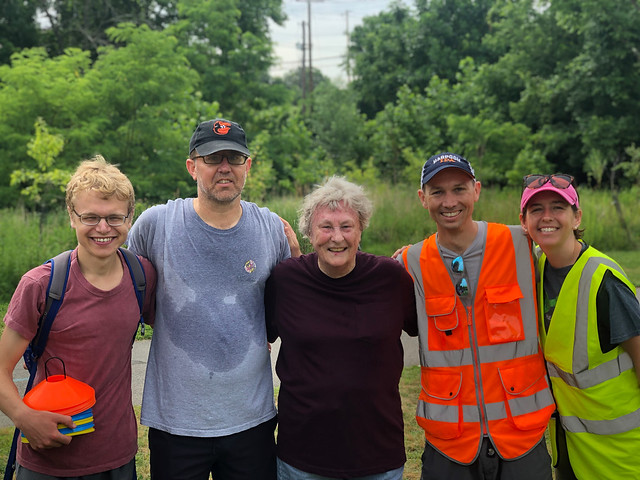 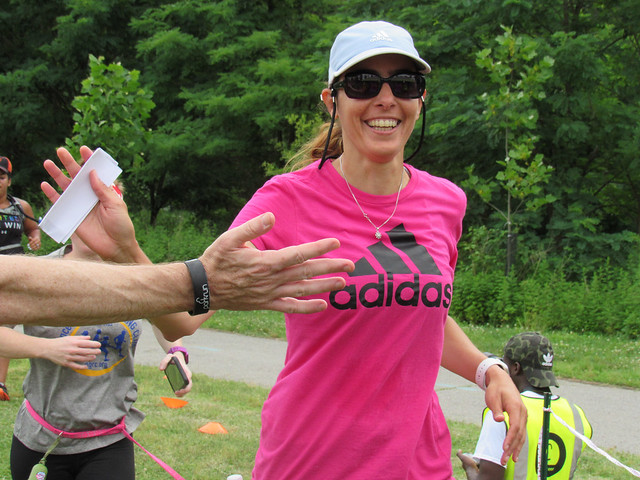 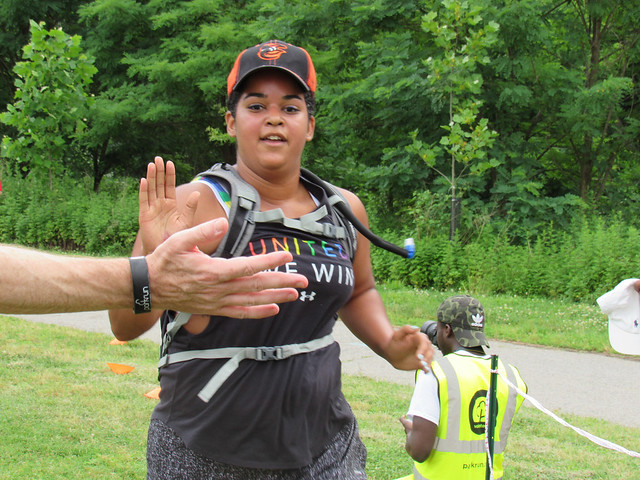 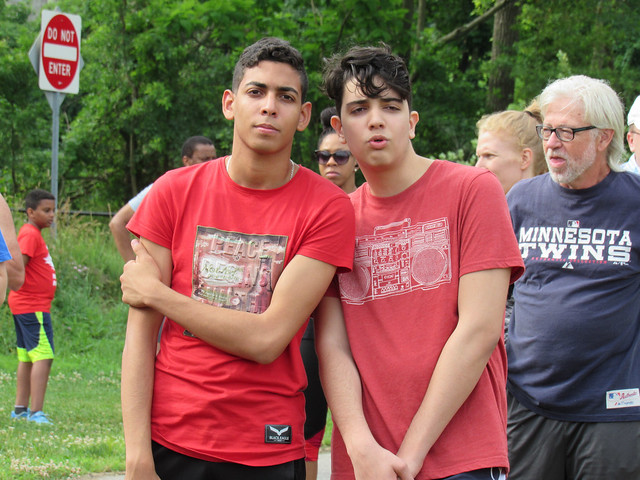 David Huen was the most seasoned parkrunner on the trail this week, completing his *236th* parkrun. Wow! But it was his first in the US. He is normally based in Cambridge, UK, and is vacationing in DC. He made the trip out to College Park because he had met Colin online a couple of years ago -- through the parkrun Statsgeek Group, apparently that's a thing -- and this was the first time that they had met in person. 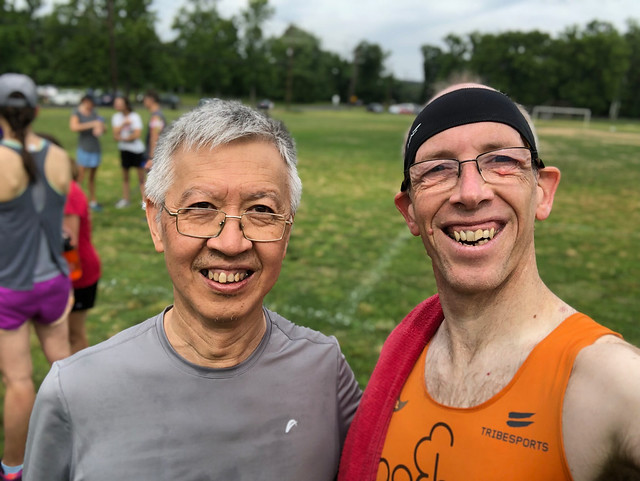 Welcome to all, and the many other first-timers this week! We hope to see you again! Kari, who has now joined us for the second week, will, I have a feeling, be a steady member of our community, especially as she appreciated my goofy humor or pretending my pen was a microphone as I “interviewed” her. I met several folks on the walk, including Gloria and Andrea. We had fun when Sharyn, who MUST be a competitive race walker, jetted past us. She was right on pace with us, and then the jets seemed to turn on and without effort, she was suddenly 50 meters in front of us! Andrea, Gloria and I were then on a hunt, trying to close the gap. Sharyn made it look effortless, and we were not making progress – but we had fun. 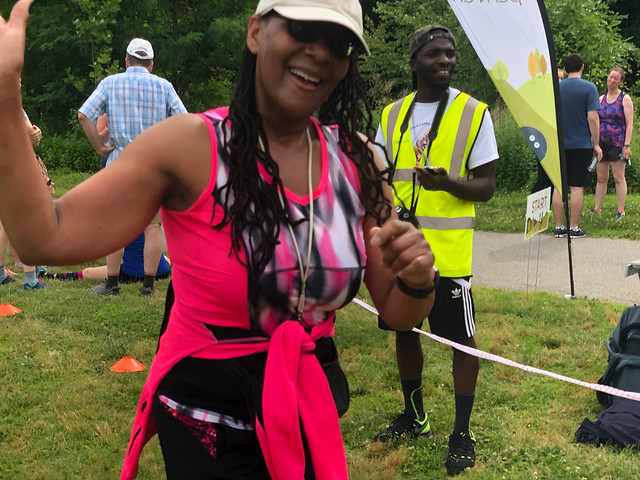 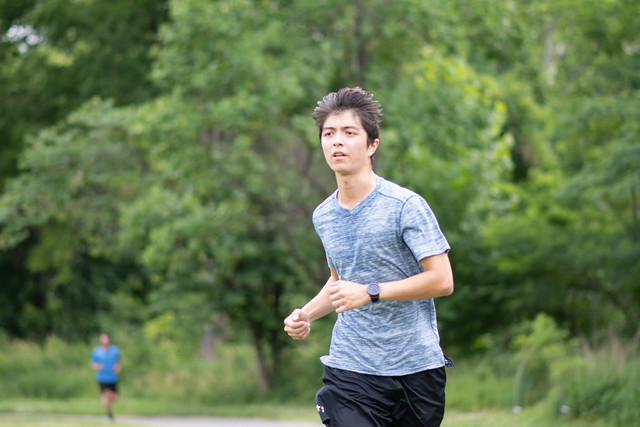 Trolley Trail Day was a reminder that we are so very lucky to have such wonderful trails and advocates for the trails in our community. I think parkrun is a great example of how these can connect and strengthen communities. 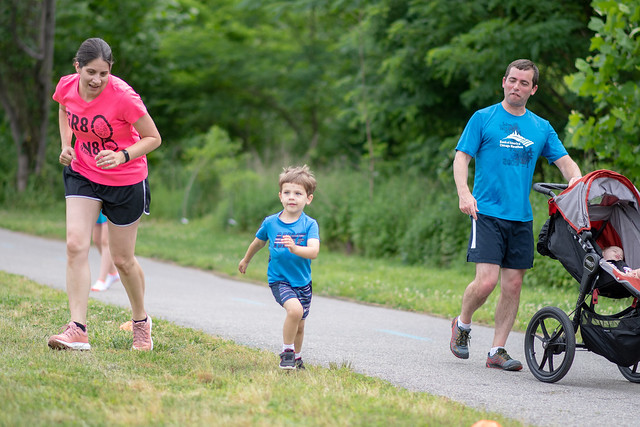 Because of the Trolley Trail Day, we missed our normal coffee/brunch at Board and Brew. However, many parkrunners found a fine alternative further down the road at Franklin’s as they processed results. We’ll be back at Board and Brew next week! 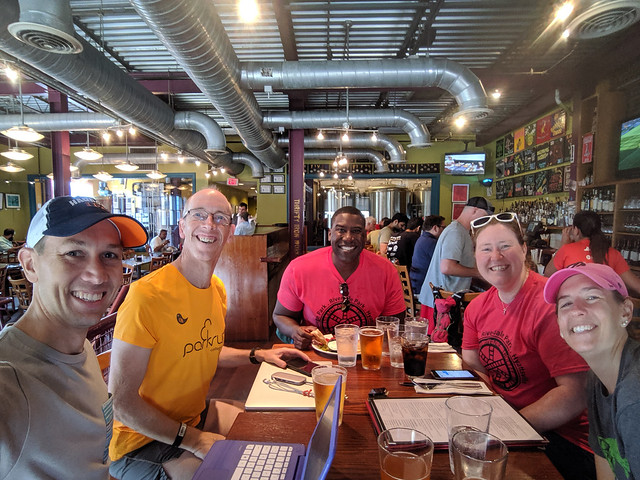 It was a great day out there!