As you know, College Park parkrun is an all volunteer operation. We’re approaching our 140th event, and have seen over 13,000 finishes, thanks to the combined efforts of the 300 different community members who have volunteered somewhere between once and 100+ times. If you enjoy College Park parkrun but haven’t tried out the volunteer crew yet, then you’re missing out. It’s a whole new way to meet and appreciate the community. 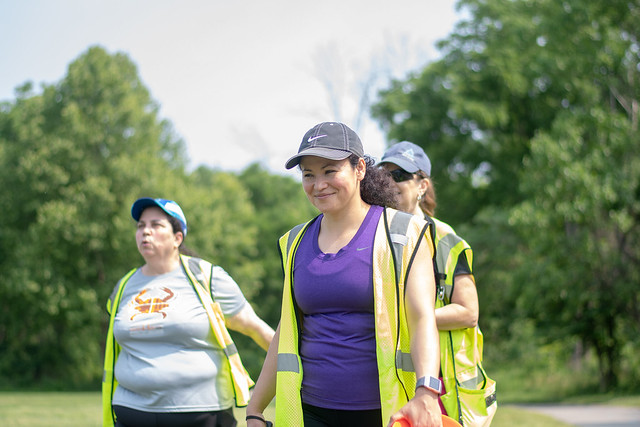 This week we had plenty of reason to feel warm and fuzzy about the volunteers.

First, Run Director Anna Tinnemore was wearing the purple volunteer superhero cape, as we were celebrating her 25th time volunteering at parkrun. Anna started joining us soon after moving to UMD for grad school, and soon discovered that walking the trail was more fun than chasing PBs while running. And she has been a friendly walking companion to so many people at College Park parkrun over the past two years. Anna completed her 50th parkrun finish back in January, and soon she’ll have a purple volunteer milestone shirt to go along with her red milestone shirt. Thank you, Anna! 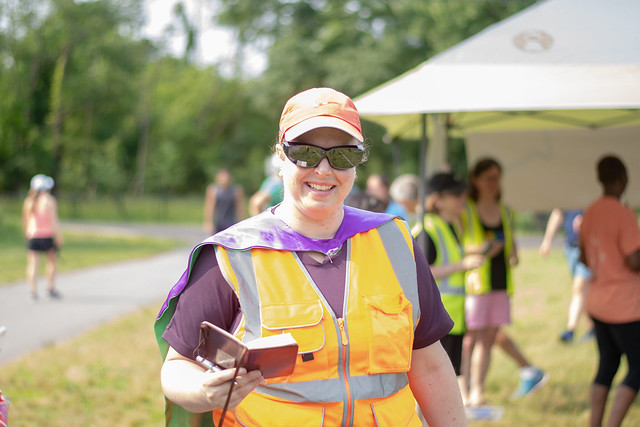 By the way, Anna’s going to be Run Director again on June 15th, on a day when a few of our most regular volunteers will be away. Can you join her crew on that day? Drop us a line at collegepark@parkrun.com.

Anna wasn’t the only person reaching the V25 milestone this week. Jenn Augsburger was also on the crew for the 25th time. When Jenn is on the crew, you just know that things will work out fine. Jenn came forward this week after it became clear that Anna was going to be doing her 25th volunteer stint. So, to Jenn’s relief, and in the immortal words of Edna from The Incredibles: No Capes!! 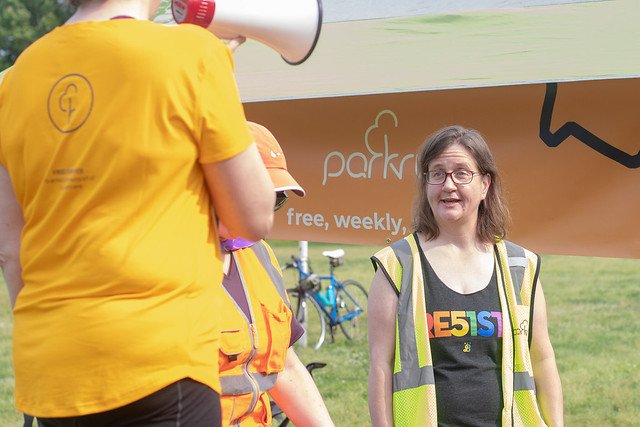 Meanwhile, Julie Russell brought a long a big chunk of this week’s volunteer crew. Julie teamed up with her mom Heather on giving out finisher tokens, and she teamed up with her niece and nephew on getting the tokens sorted again. No big deal -- except that Julie is blind. She took on these volunteer roles without hesitation. Julie’s unfailing can-do attitude is one of the things that helps us to get some perspective on life’s ups and downs. 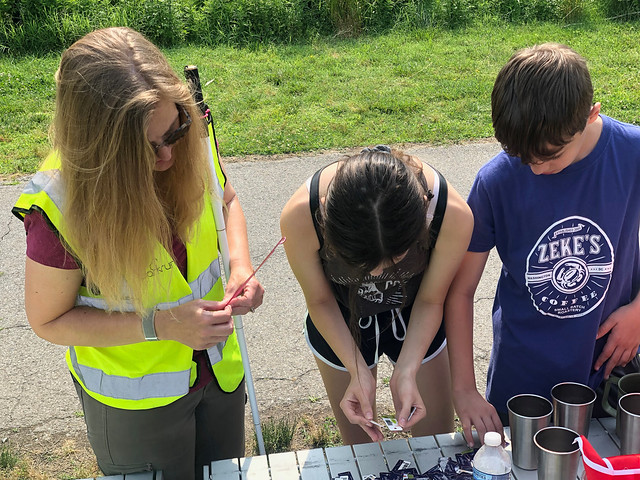 This week Abdur Rahman-Quadri and Michelle Brandy were our ace timekeeping crew. In Abdur’s case it was his 4th consecutive week of timekeeping AND taking ace photos at the same time. Abdur has been volunteering every week during the month of Ramadan. He has had fun, and we have all benefited.

Then there’s Hump and Lisa. Some parkruns have nice signs or chalk marking on the trail. We have Hump and Lisa. They’re out there at the golf course and the turnaround almost every week, in ALL weathers. Always happy to greet you as you go past. They’re not just standing out there. They are also a key part of our safety measures. Lisa does a trail check before others run or walk the trail. And they’re also able to relay messages up and down the trail. We needed that this week when one parkrunner was struggling in the heat, after recently giving blood. Hump messaged back to the finish line. We quickly dispatched a couple of parkrunners and some water. And by the time they reached the needy parkrunner, another couple of parkrunners, one of them a nurse, was already on the case. Wonderful community support!

What else was happening at CP parkrun this week.

A lot of people joined us! 151 finishers, plus lots of barkrunners, stroller riders, part-parkrunners, supporters, and volunteers. The community keeps on growing! 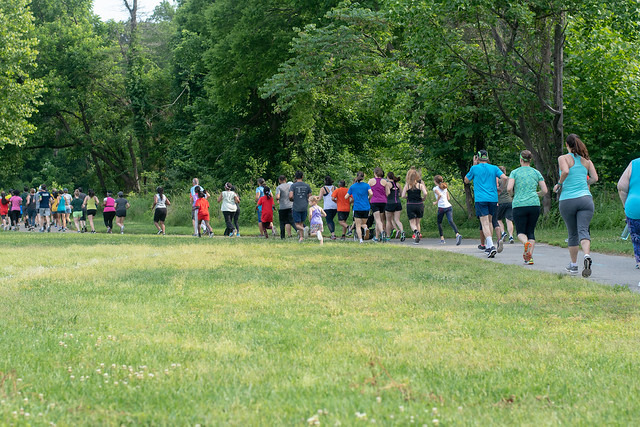 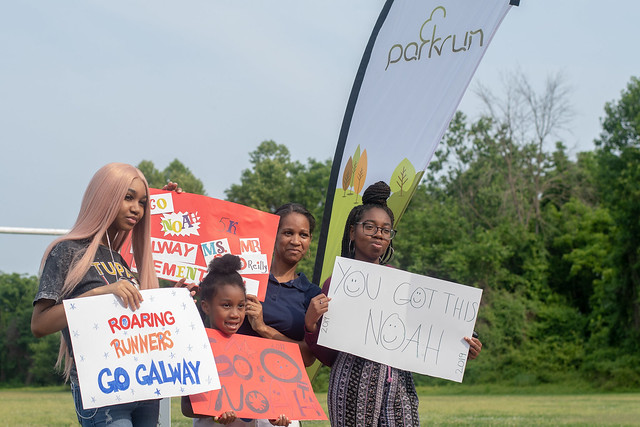 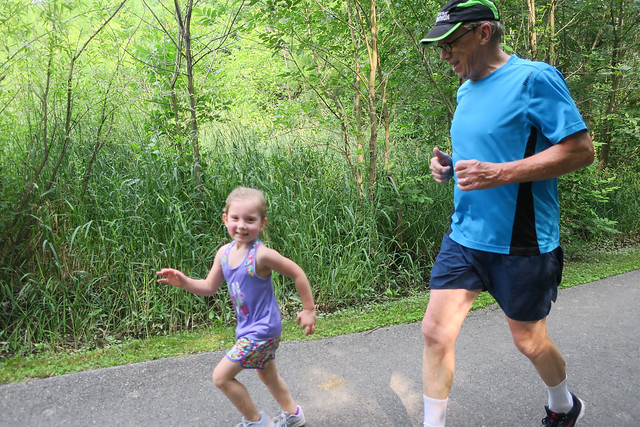 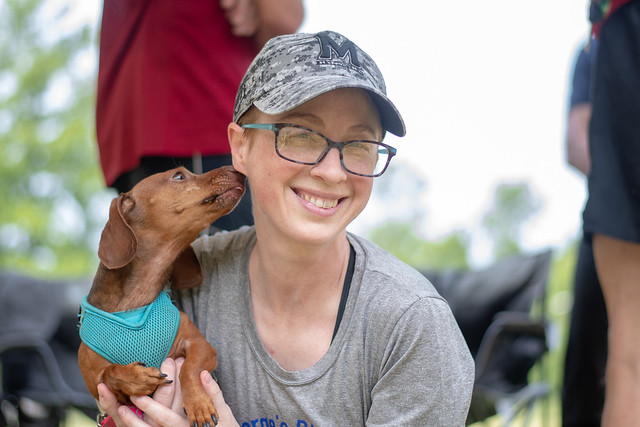 We had a lot of first-timers this week, and more new registrants than we have seen in a long time. Many of those first timers came from Galway Elementary School in Calverton, who used parkrun as the culmination of their running program for the kids. We loved welcoming the kids, families, and teachers, and we’re glad to be an event that’s free, local, and serves all paces. 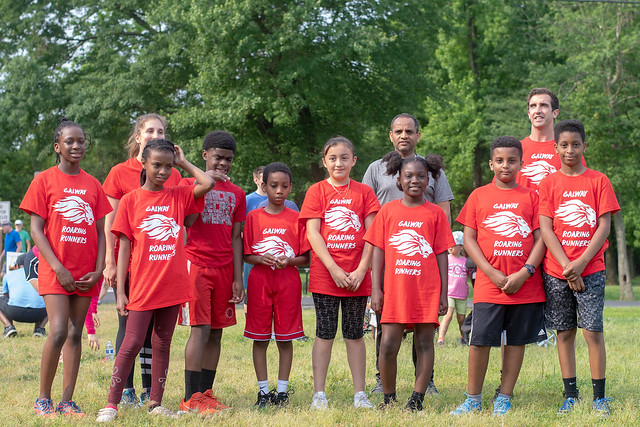 Some of this week’s first-timers were visitors from other nearby parkruns. Anacostia parkrun was closed for another event, so Tonie, Judy, Marjorie, and Lajune joined us instead. We also had visitors from Leakin Park parkrun, and Steve King joined us from Kesgrave and Ipswich parkruns in the UK. Kriti Bhargava brought along her mom, and we suspect that she was visiting from far away, though we’re not certain. We hope she enjoyed the walk on our beautiful trail. 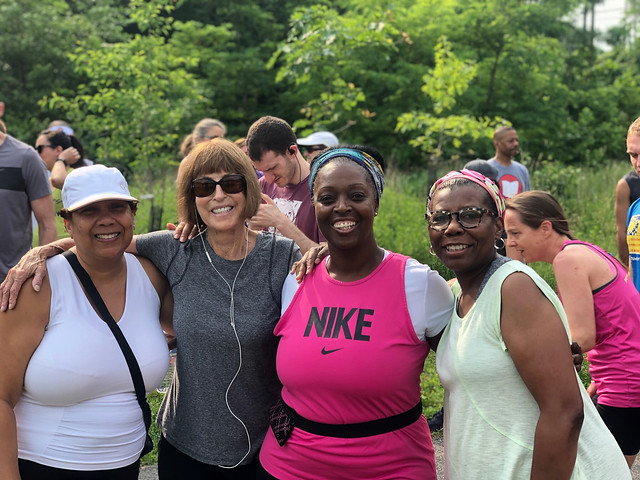 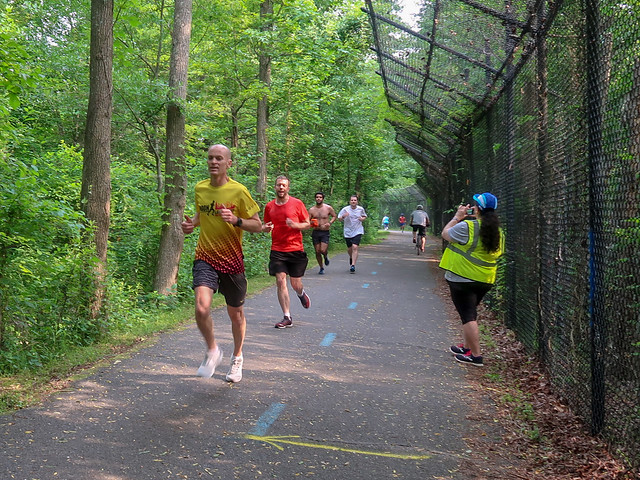 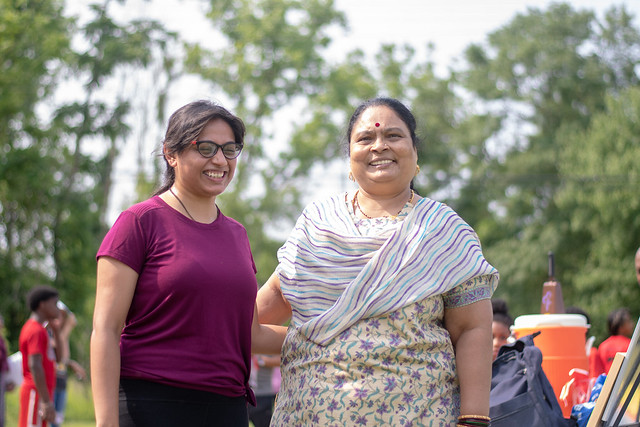 One other special first-timer this week was young James Schneider, aged only 20 days. It seems like just a few weeks ago that Team Schneider, including a very pregnant Erin, was the tailwalking team. We didn’t expect to see them back so soon, but we were super happy to see them. James seemed unimpressed, though. He slept through most of it. 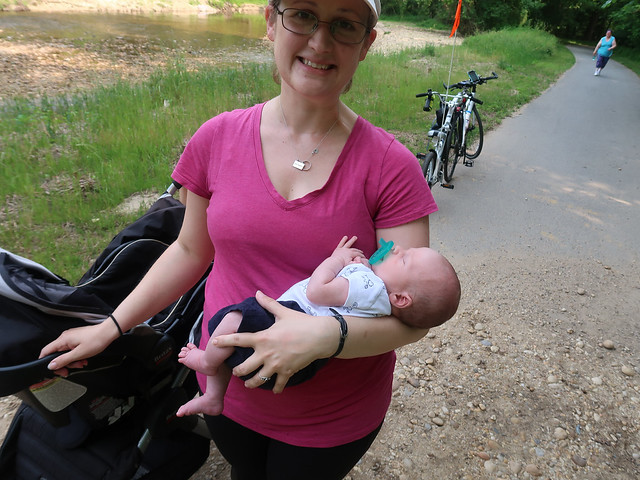 We almost missed it but Paul Hargrave ran with us for the first time, and he smashed the course record for parkrunners aged 80+ in the process, with a speedy 27:01. Seems that Paul’s from Florida, and he’s not only fast. He’s also the person who, in the 1970s, figured out the chemical composition of rhodopsin, a key protein in the eye. You never know who you’re rubbing shoulders with on the start line on a Saturday morning! 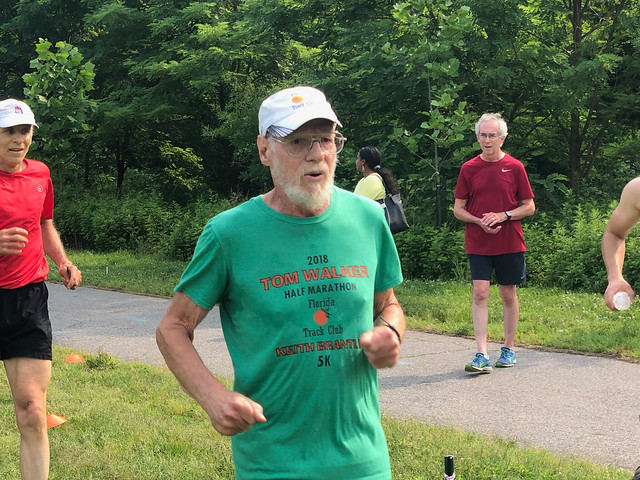 There were no official running or walking milestones reached this week, but we did see a few unofficial milestones. 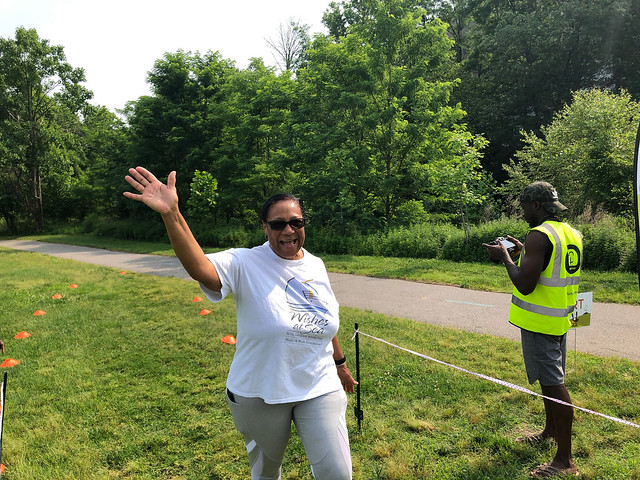 With the temperatures heating up, there were fewer PBs this week.

Kim Nickens and Celeste Pere were back for a second time. PBs are great, but seeing them return, and have a good time, makes us really happy. 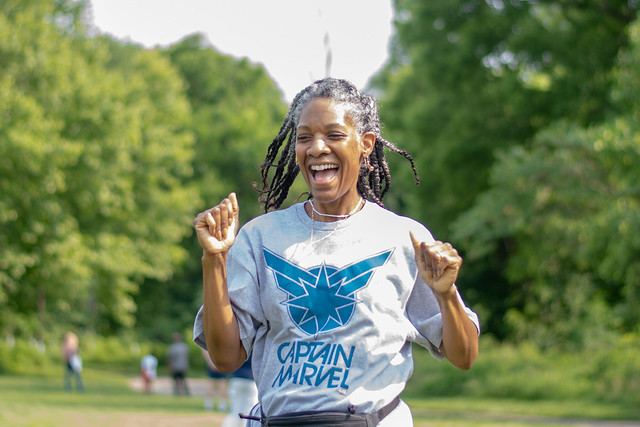 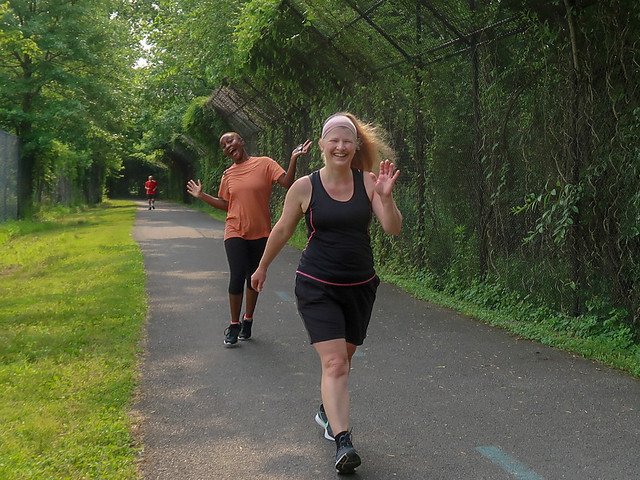 Matt Dernoga seems to have his running mojo back, and he managed to beat the PB that he set on Memorial Day two years ago. Similar for Kayla Hayes, who took minutes from a PB that she set in summer 2017. 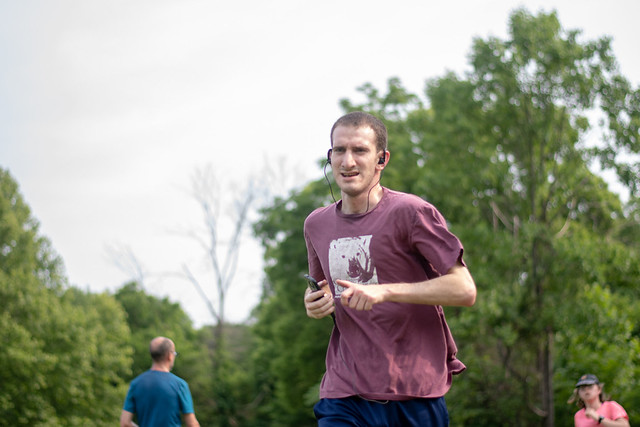 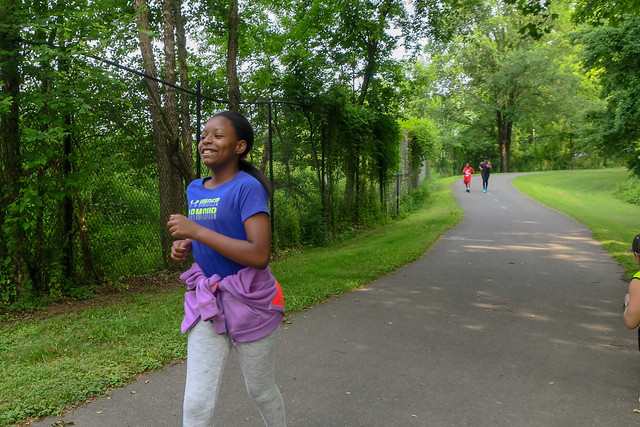 John Maneval set a PB on his 15th parkrun. In fact, he seems to be setting a PB almost every week. In 15 parkruns he has set a PB 12 times, going from 32 minutes on the first outing last November to 24 minutes this week. Nice! Derek Symer seems to be on a similar streak, now having gone from 33 minutes to 27 minutes over the course of his 15 CP parkruns. 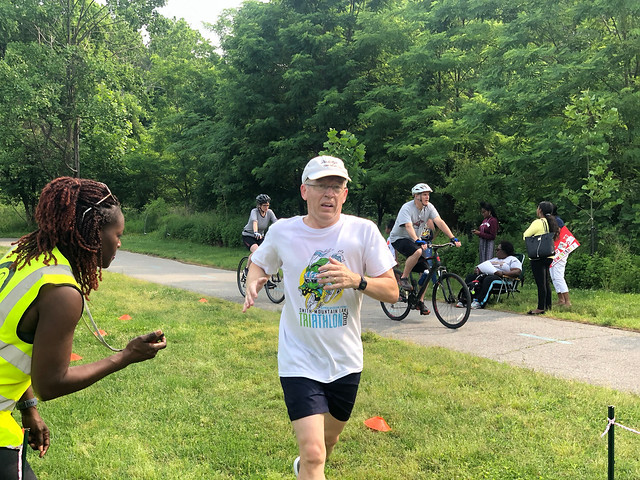 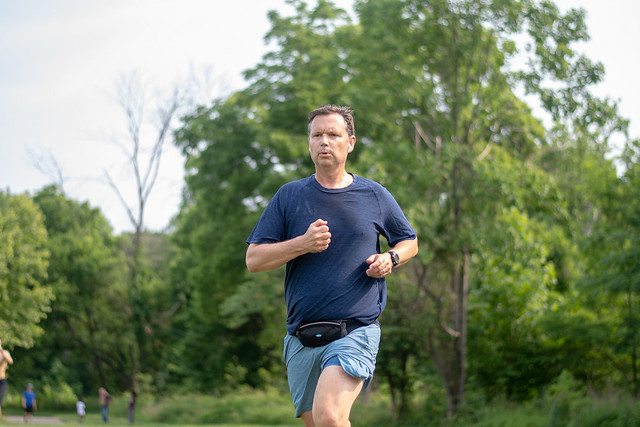 And Ben Flamm is on fire right now, setting his second PB in two weeks, with a clocking of 18:51. Lisa even caught photographic evidence that Ben was following perennial first-finisher Sam Phipps all the way to the turnaround. Well, almost all of us follow Sam to the turnaround, but most of us do it from a safer distance. 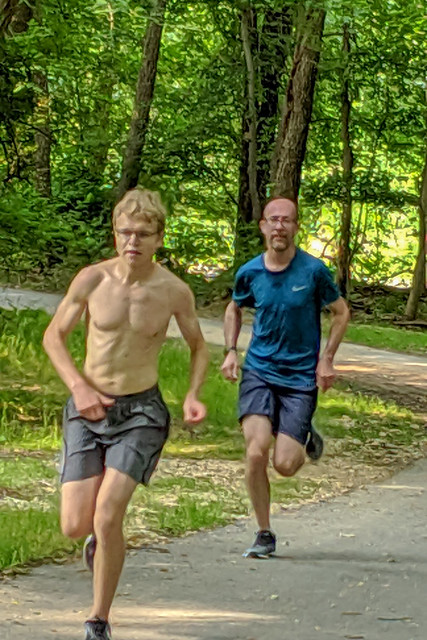 PBs are nice, but we’re always happy to welcome community members on the trail, to go at whatever pace works for you. So something that excited us more than the PBs this week was the number of walkers and walk-runners at CP parkrun. Around a third of participants. We love this growth in our community! Thank you for continuing to spread the word. 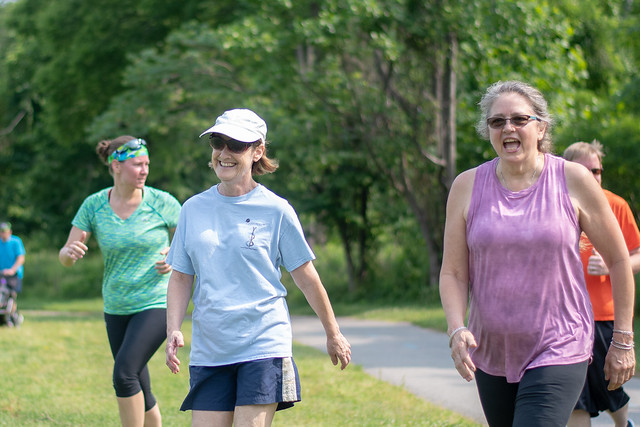 This week, Saturday June 8th, promises to be a busy day, and a fun one. We love our beautiful trails, so we’re excited to be involved in the first Trolley Trail Day, led by the College Park City-University Partnership, in conjunction with the cities of College Park, Riverdale Park, and Hyattsville. Here’s the lineup for the day …

10:30. Trolley Trail Fun Run. Want to get in some extra running or walking, or try out something else for a change of scenery? This run starts at Acredale Park, close to parkrun, and then follows a 6K route along the bike trails through College Park, Riverdale Park, and Hyattsville, to end by Franklins Brewery and General Store. Free entry, just show up. All finishers receive a free Trolley Trail t-shirt, plus specials at old and new favorites along the trail, including Franklins, Denizens Brewery, and Vigilante Coffee. 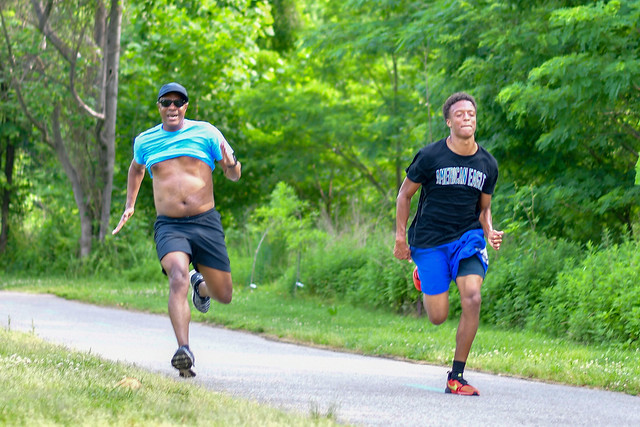 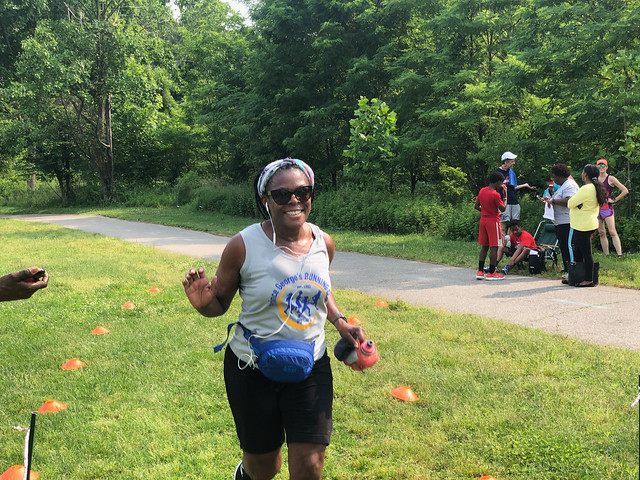