Most weeks your parkrun volunteer team trade bets on how many parkrunners will come along that day. With lower temps and a strong breeze that brought the word “windchill” back from its summer rest, everybody expected a smaller crowd this week. And at 8:50 this seemed like a good call. But then as 9:00 approached the park filled with smiling faces and suddenly we were feeling entirely warm and fuzzy, thank you very much. 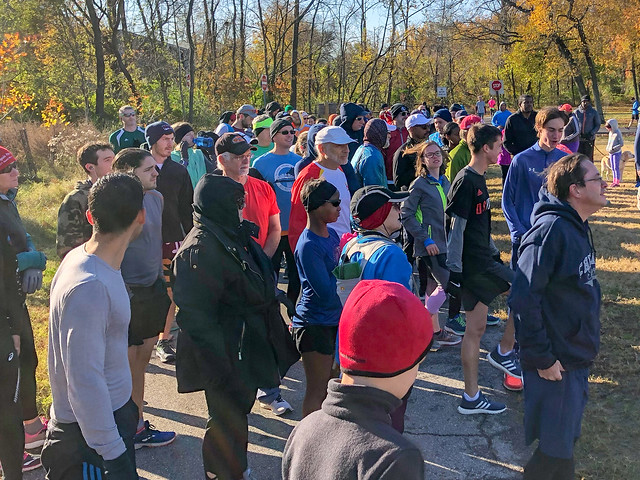 After a 5k on the trail we were feeling nicely warmed up, but a few minutes after finishing we weren’t feeling quite so toasty. So we’d like to give special thanks to the volunteers and everybody else who stayed around to cheer in every single finisher this week.

Some first-timers join us because they were looking around online for running events and found us. That’s how newcomer Stewart Mayhew found us. Stewart started running just a few months ago and is making great progress. 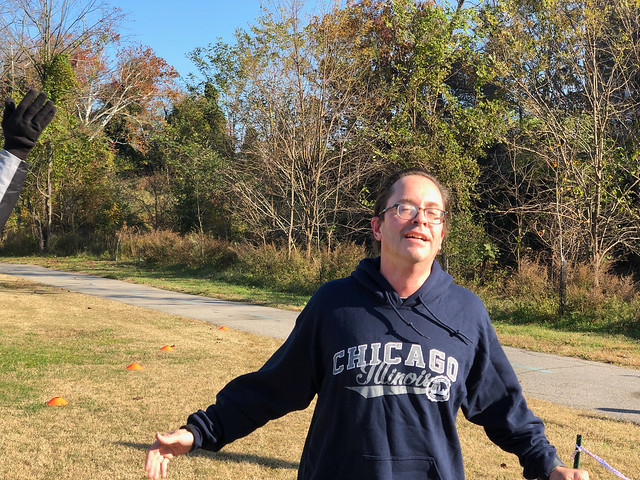 Many first-timers join us because a friend brings them along. That’s how this week’s first-finisher Chris Teter found us, as he came together with CP parkrun regular and St John’s teammate Austin Rios-Colon. 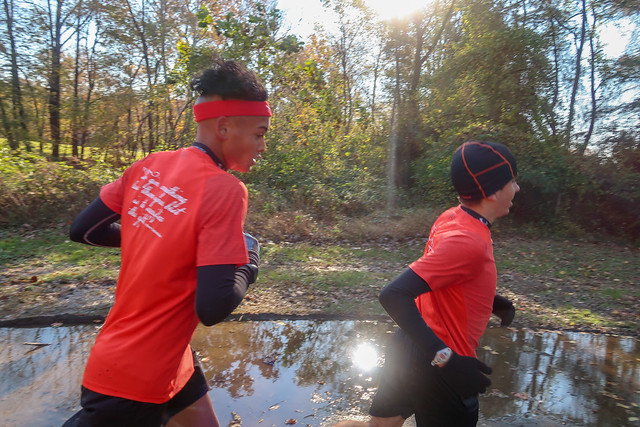 Some first timers join us because they’re dedicated parkrun tourists who are looking for an interesting event to add to their collection. That’s how Shamiso Sisimayi found us. Shamiso normally runs at Woodhouse Moor parkrun in Leeds, UK, one of the world’s oldest parkruns. Last week she set a course record at the new Delaware and Raritan Canal parkrun in New Jersey, as a warm-up to the next day’s New York City Marathon. This week she ran to parkrun, zipped around the course, then ran back to her hotel to get ready for her flight home. 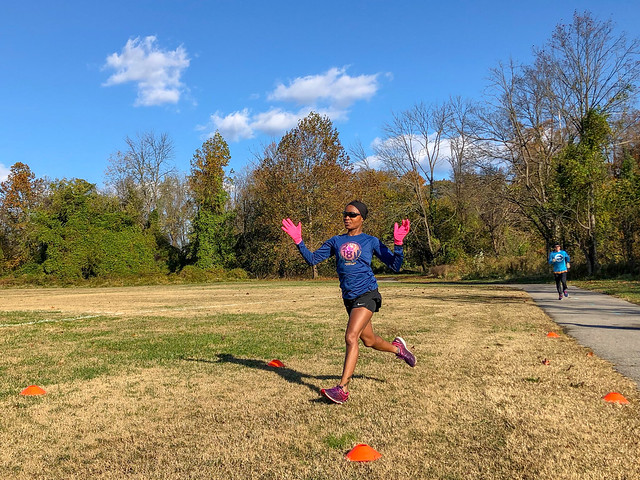 As it happens, 4 seconds behind Shamiso was Bernard Kelly, who also was recovering from last week’s NYC Marathon. You may recall that Bernard did a lot of volunteering at parkrun earlier this year while fending off injuries, so it’s great that he was able to bounce back strongly enough to run a marathon. 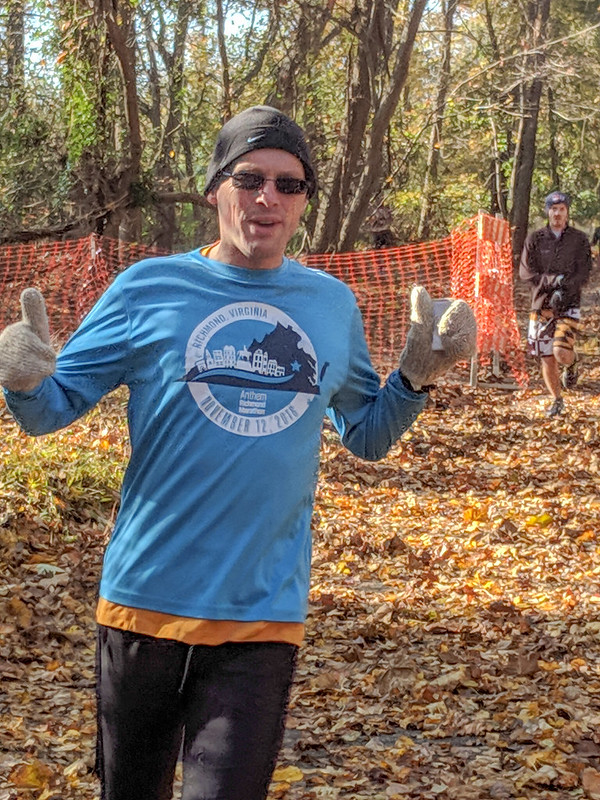 We celebrated one official parkrun milestone this week. 7-year old Lucas Aguilera Kelley joined his brother Diego in the 10 club by running around the course with his dad. We’re hoping that the white 10 club shirts (for under 18s only) will be in stock soon, as we know that so many of our junior parkrunners are waiting to order them. But we’re honestly not sure when this will happen. Fingers crossed! 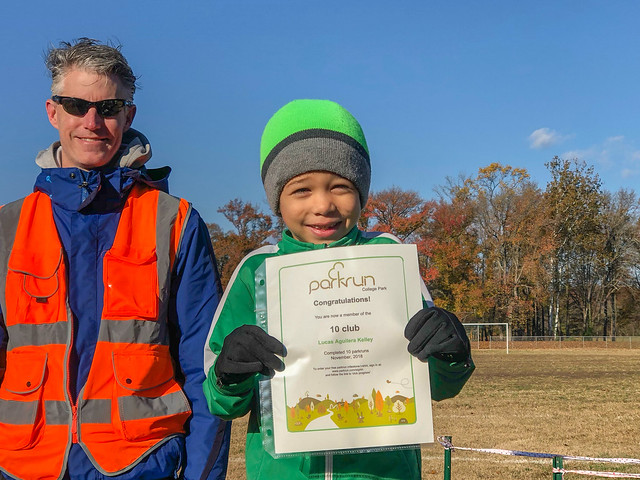 A number of people reached unofficial milestones. Joel Goldberg did his 25th parkrun, making him halfway to 50. Sharon Chi, Lucas Aguilera Kelley, Bernard Kelly, Bryan Koen, and Eric Pino all are now 10-timers at College Park. Britain Bruner, Sallie McElrath, and Francisco Reyes are now 5-timers at College Park. The family keeps on growing! This week we expect to see the 2500th person register for a barcode at College Park parkrun. 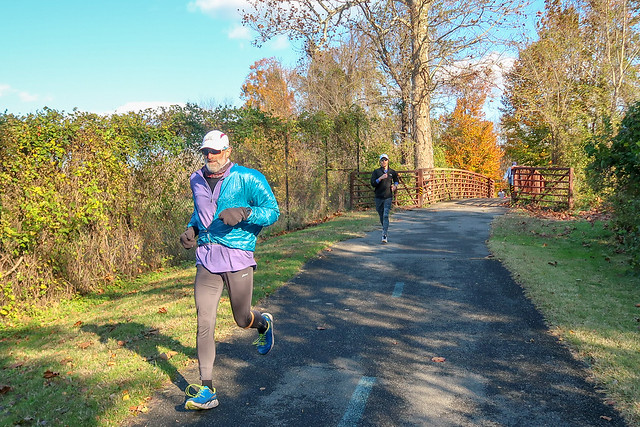 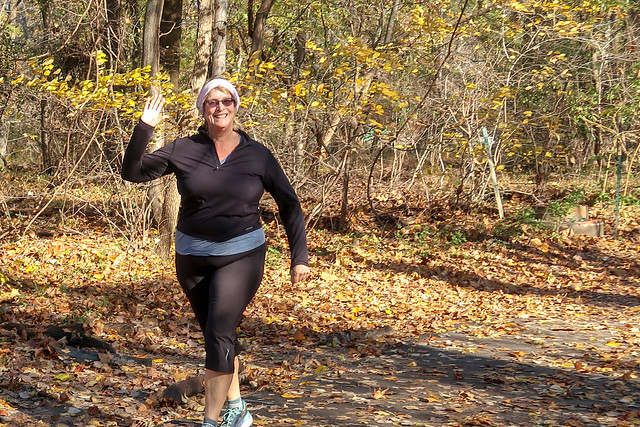 Lots of PBs this week. They included John Jensenius, who was running his 99th parkrun. Next week he’ll become the first College Park regular to join the 100-parkrun club. (How did he do this while keeping a fairly low profile? By doing the first 80 or so at Oxford parkrun in the UK. But we’re delighted that he and Emily now call College Park parkrun home.) 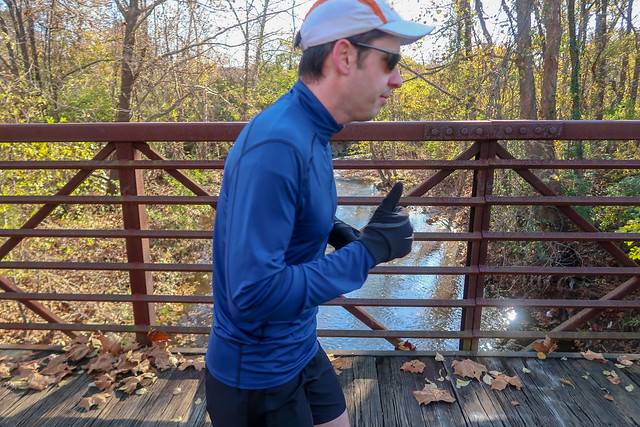 Tara and Xander Mease took more time from their PBs, and they always look like they’re having fun. Austin Rios-Colon returned for the first time in a while and took a full minute from his PB. That’s not so easy to do when you’re already as fast as Austin, but the HS cross-country training must be helping. 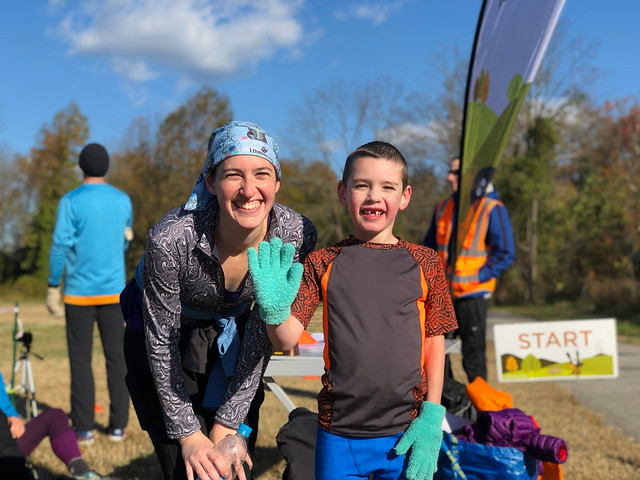 Francis Parks has been on a PB streak lately, and he continued the streak this week. Hannah Collins was paced by her dad Kalonji, who took a break from setting PBs of his own to pace Hannah to a three and a half minute PB (!). 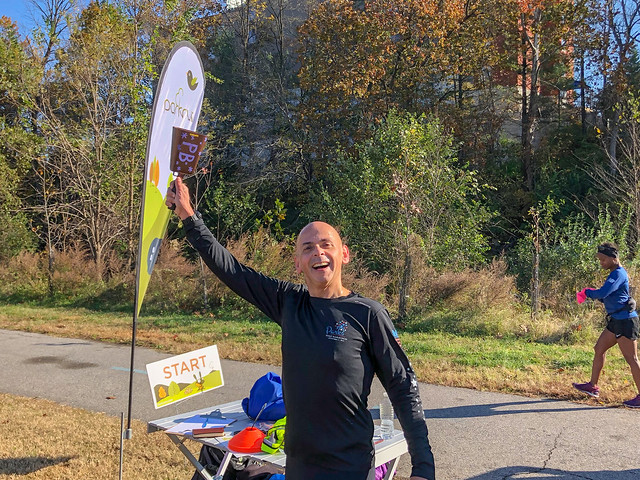 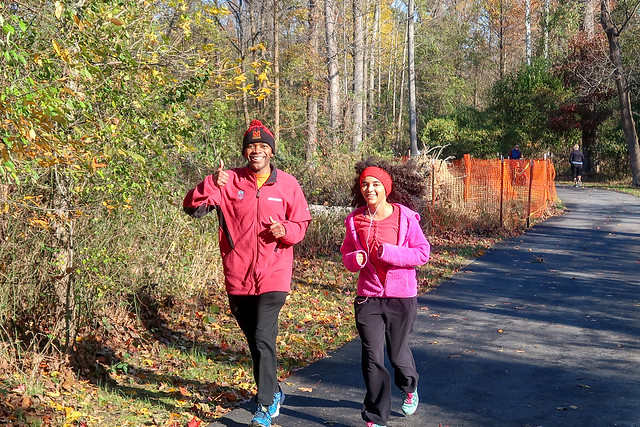 Meghan Gieske continued her tear of PBs with yet another chunk of improvement. Magdalena Duhagon and Angela Perdomo have been 3 times, and have set 3 PBs. Abba Milkii can go one better than that: he has now run 4 times in 4 consecutive weeks and has set a PB every time. Jair Jackson is also on a 4 parkrun PB streak. 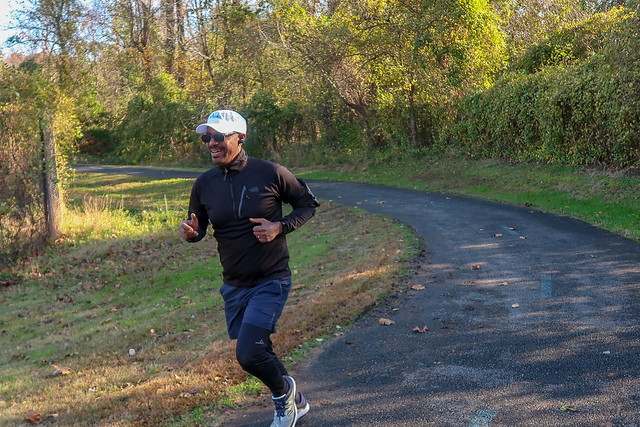 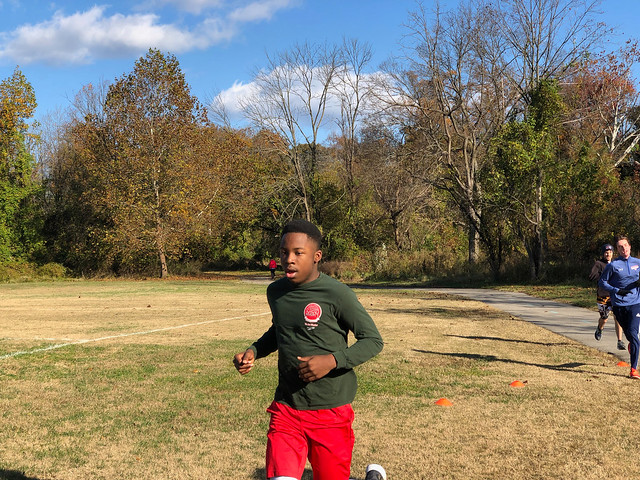 parkrun is about much more than setting PBs. It’s great if you just enjoy a run with friends or family. But if you’re looking to get faster, we do enjoy seeing your progress. 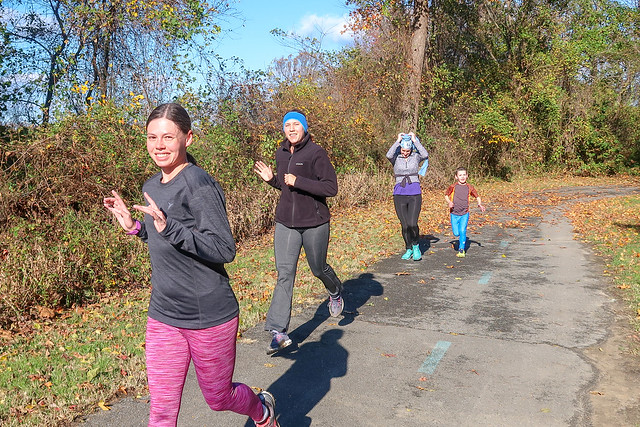 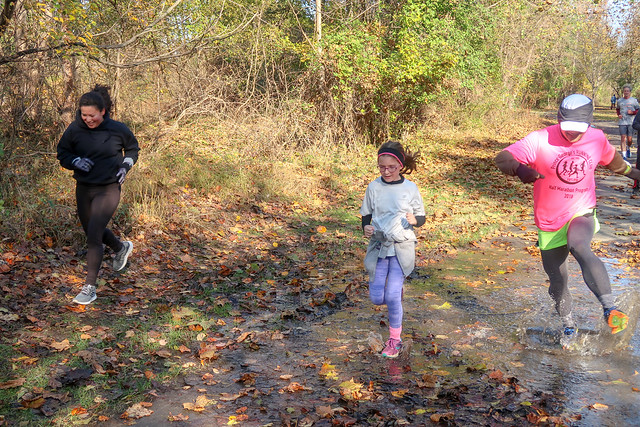 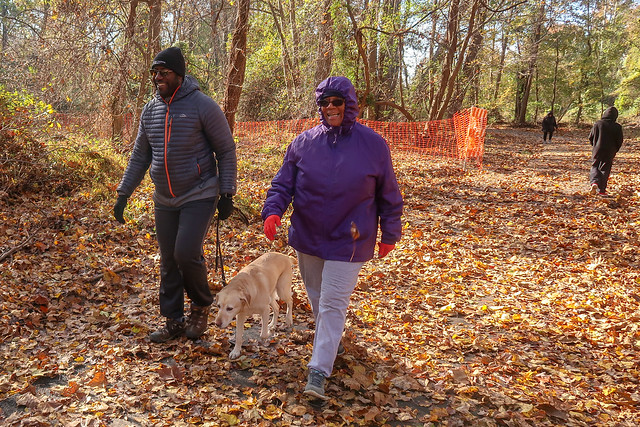 It’s getting to the season where we start bringing along hand warmers for the parkrun volunteers, so we’re especially grateful to this week’s crew. UMD students Judy Choi, Lindsay Kaufman, Monica Polanco, and Casey Schweber joined us as tailwalkers and part of the finish-line crew this week, simply because they wanted to help out. They did great, and we were thrilled to have them be a part of our crew. Larry Washington took a break from his running comeback to do timekeeping, joined after his run by Bernard Kelley. Hump and Lisa wrapped up warm to look out for you along the course. And Jim Parsons kept everything running smoothly as run director. Thanks to all of  the volunteers this week! 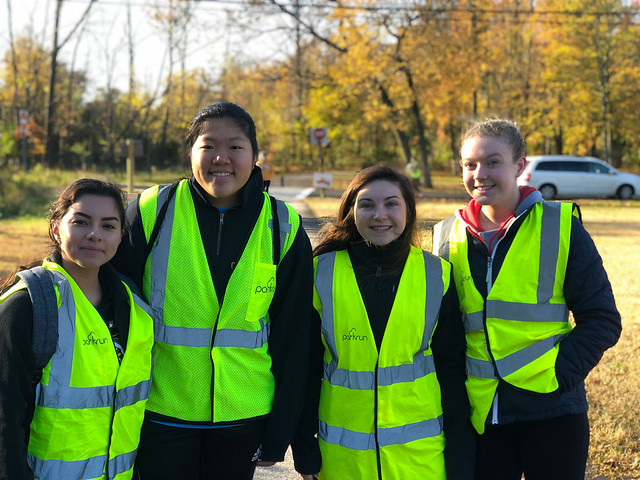 We’ll be back at the same time, same place next week for parkrun #109. Don’t forget that we have our first ever Thanksgiving morning parkrun on Thursday November 22nd. We know that some of you have schedule conflicts on Saturdays, and some of you will have friends and family in town. So this will be a great opportunity to introduce some new people to our warm, healthy community. And, as usual, the price just cannot be beaten.