We were treated to a beautiful Fall morning for College Park parkrun #107. Perfect for a week that was dominated by trees. Along the trail the trees were in peak Fall color. The stretch of trail just beyond Hump’s Crossing was like a golden tunnel. And we also planted about 50 trees, working with our friends from Prince George’s County Parks & Recreation. 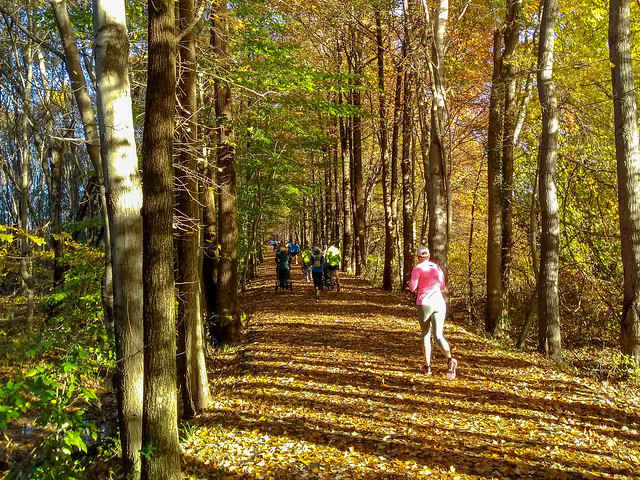 We are so grateful to everybody who helped with the event - a total of 29 volunteers this week!! - and to PG Parks for being such great partners. The aim of College Park parkrun is to help support a healthy community. And being a healthy community means more than just running back and forth along a (rather pretty) trail. It also means connecting people of all ages and backgrounds. And it means being invested in a healthy natural environment. Our stewardship of our stretch of the Paint Branch Trail is just a tiny step, but hopefully it helps us all to be more aware of how the local watersheds are affected by the changing seasons. 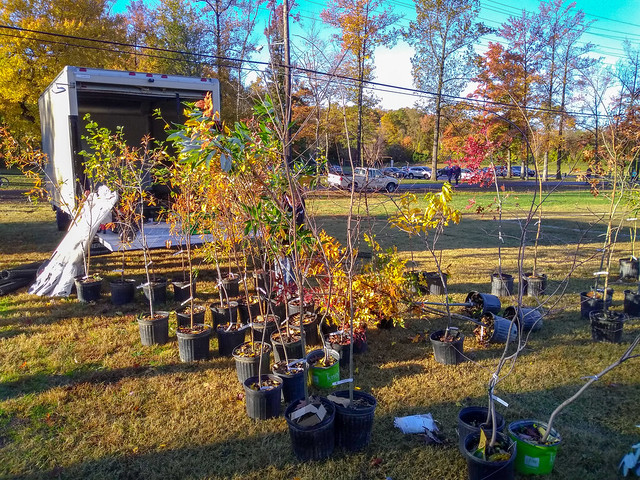 Every week in the run briefing we mention that “we share the trail”. This means that we have no special right to use the trail during parkrun, and we make every effort to ensure that we’re not interfering with other trail users’ enjoyment. If you pass somebody walking or running on the trail during a parkrun, do say hi. This week we had a couple of other good examples of sharing the trail.

Bud Verge has become a regular parkrunner since first joining us 6 months ago. Often he’s pushing for a new PB, and we love to see that. But we also love that recently Terrye Verge started joining us, mixing it up with the walking and run/walk folks. This week Bud figured it was a good day to kick back, enjoy the trail with Terrye, and cheer on some of the other parkrunners.  We encourage anybody to try this some time - just slow down a bit and take a jog or a walk. Join a friend, or meet somebody new. You’ll enjoy it, and the folks towards the back will appreciate it. 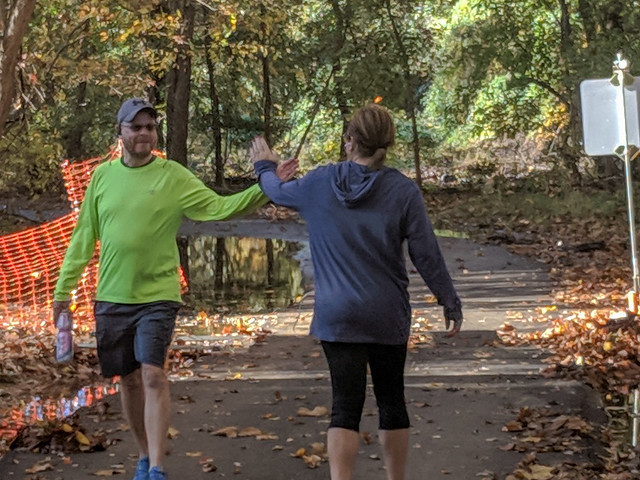 John and Emily Jensenius have been trading weeks of running with the stroller. And as often as not, the one without the stroller sets a PB. This week it was Emily’s turn to set the PB. 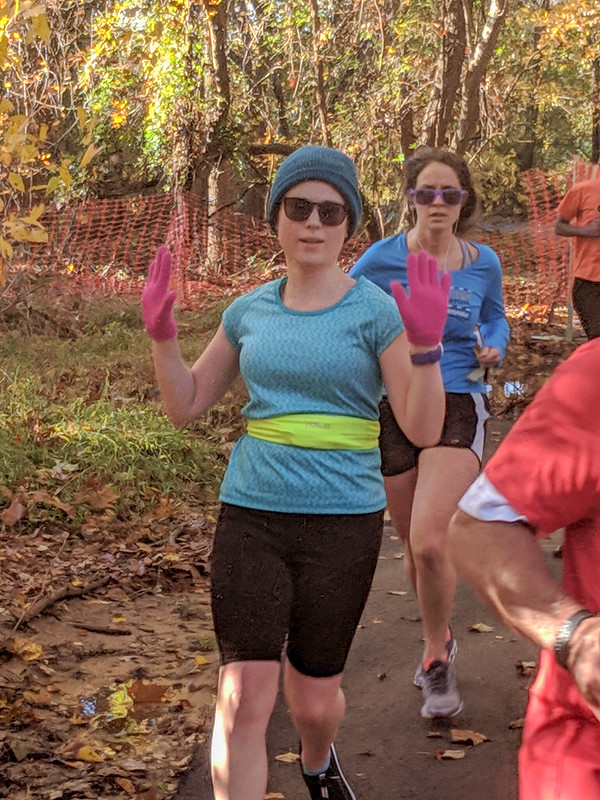 Meanwhile, Jessica and Rob Gerbig came up with a new approach that we hadn’t seen before, sharing the stroller duties in the *same* parkrun. Jessica showed up at the turnaroud with the stroller, but then appears to have passed the baton to Rob for the return. 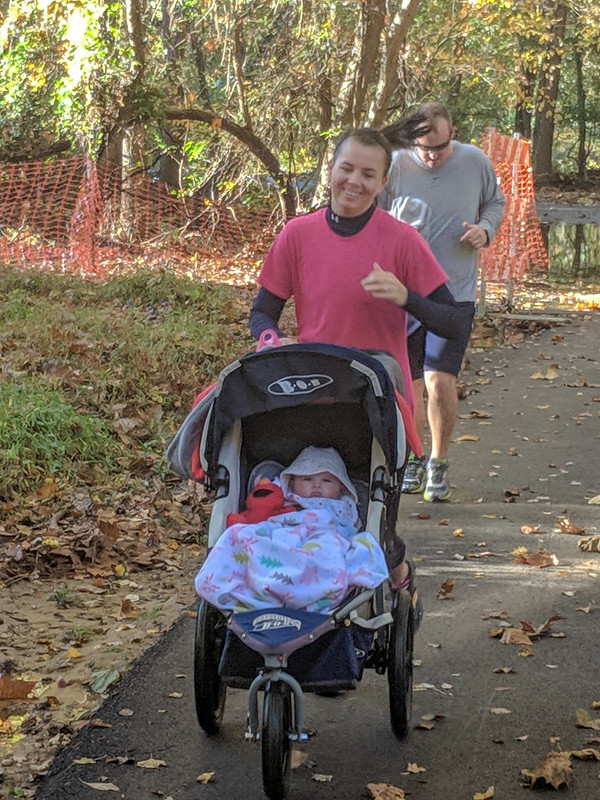 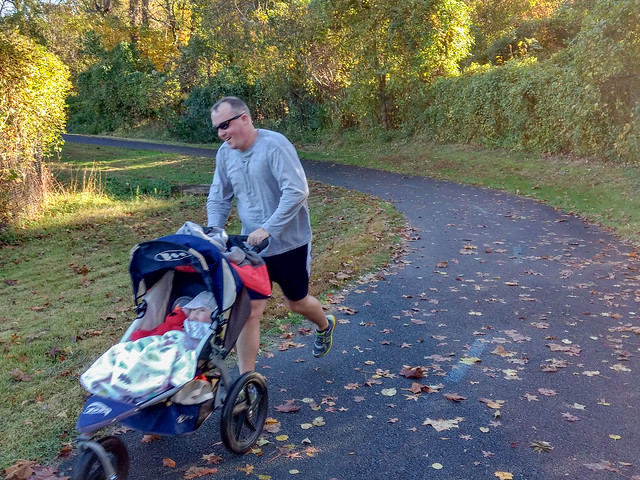 We had no official milestones this week, but lots of folks are getting close, and more are reaching unofficial milestones. Cindy Cohen ran College Park parkrun for the 50th time. She has done 96 overall, so a black 100 shirt can’t be too far in her future. She’s not alone, as she was one of 5 at this week’s run who are closing in on 100. We had 4 new members of our 10 club: Külli Puusta, Rube Ahmed, Kriti Bhargava and Harshit Banthia. And Frank Snyder became the latest new member of our 5-parkrun club. 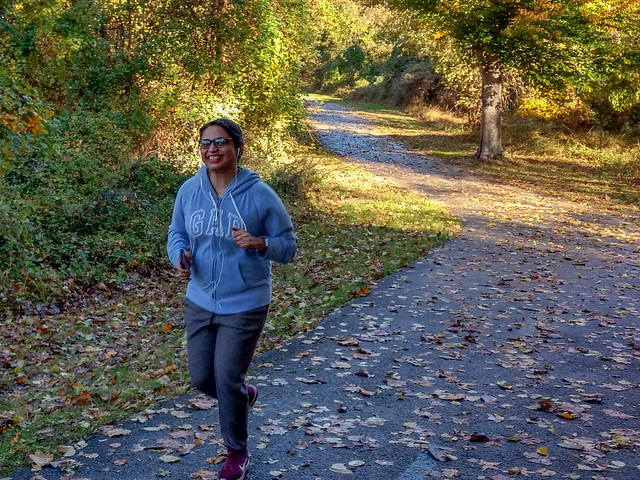 With such great weather, it was little surprise that we saw a bunch of PBs this week. 13 in all. Notably, John Ramsey set a new PB on his 68th parkrun. We remember a time when John was setting PBs almost every week, but when you’ve run this many times, they don’t come so often. We love that John credits this week’s PB to being pulled along by his friends Erin and Dom. In Megan Gieske’s case, it was husband Ben who helped her along to a PB. 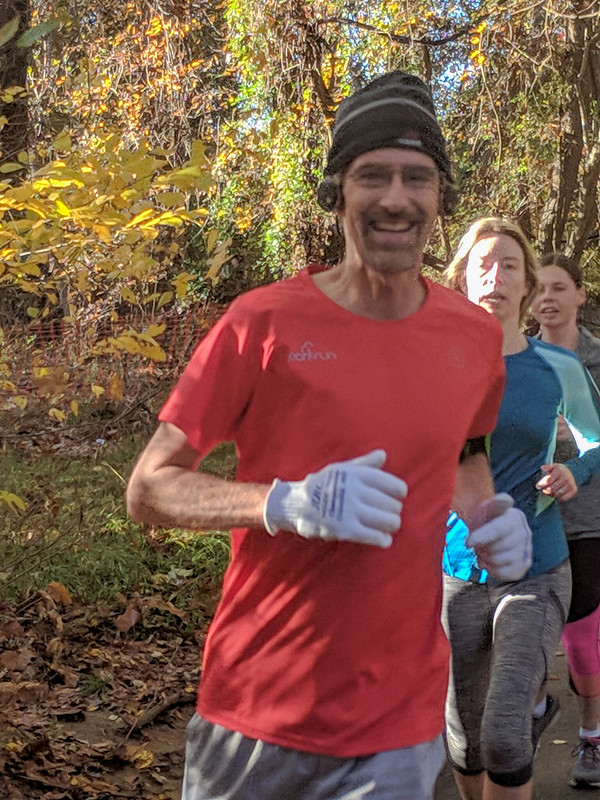 There were plenty of other PBs, too. Kalonji Collins and Emily Jensenius just keep getting faster. As does Dave Heintzelmann. Carlos Chaverri must have benefited from his half marathon training, as he scored another PB this week. Tomas Marambio came *so* close to cracking 20 minutes for the first time. We’re sure that it will come soon. Maria Ialacci took a little more time from her PB, as did Jim Cantwell. Other PBs came from Matt Gembecki, Robert Grumbine, Abba Milkii,  and Jair Jackson. 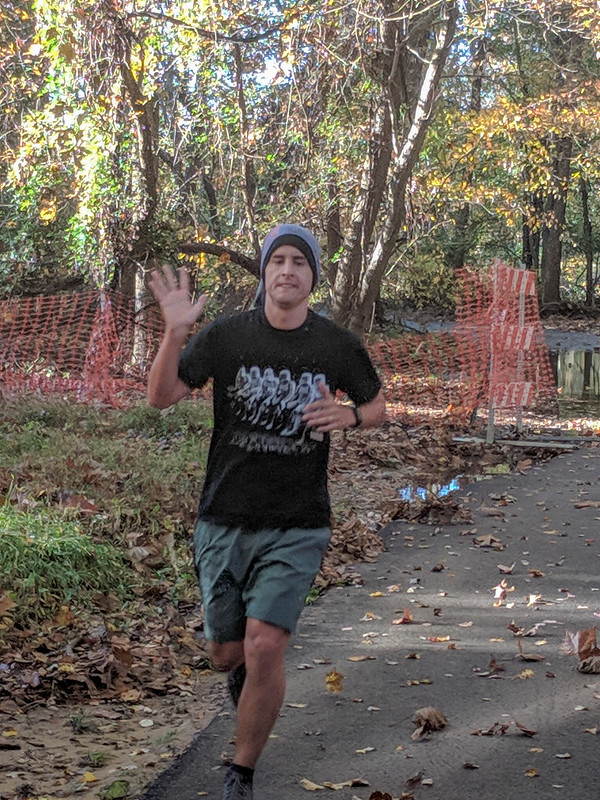 We had So Many Volunteers this week. Thank you again to everybody who helped out. It’s a big list! Yancira AMAYA, Jenn AUGSBURGER, Harshit BANTHIA, Jay BAO, Kriti BHARGAVA, William BOBSEINE, Gus CAMPBELL, Kathy CEA, Rob GERBIG, Jessica GERBIG, Benjamin GIESKE, Meghan GIESKE, David HEINTZELMAN, Nick HUANG, Enrique JOGRAJ JR, Pete MONACELLI, Kiera PARSONS, James PARSONS, Colin PHILLIPS, Hump PLOTTS, Clark RIDGE, Duane ROSENBERG, Catherine SPIRITO, Anna TINNEMORE, Yogarshi VYAS, Pete WERGIN, Susan WHITNEY, Lisa WILSON, Andrea ZUKOWSKI. This included Clark Ridge and Nick Huang, who together helped coordinate the run and planting volunteers, and acted quickly when both barcode scanners went on strike at the same time (the devices, that is, not the helpful volunteers!). And the biggest help of all for the tree planting was from Antonia Bookbinder, Anthony Nolan and their crew from Prince George’s Parks. We were a little worried when we heard that they were bringing along 60 trees, but you guys made light work of it. The presence of a power augur for making holes surely made a big difference. 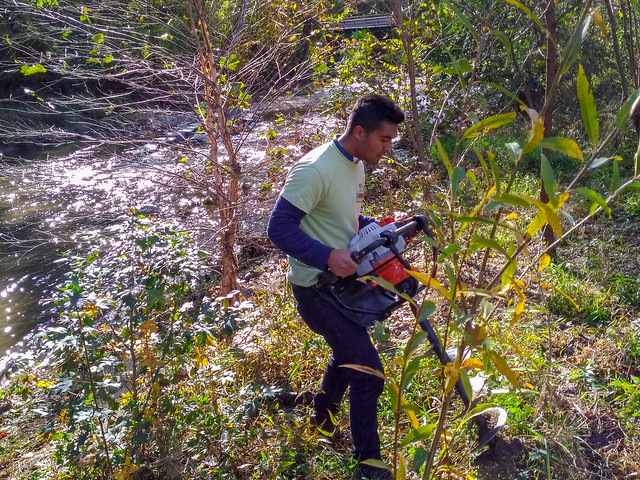 This week a number of our core team members were off parkrunning elsewhere. Last week’s run directors Steve and Cindy Feld were found at Clermont Waterfront parkrun in Florida, where they likely found better weather than in last week’s drenching parkrun. Co-event director Andrea Zukowski was at the launch of Lillie parkrun in Ann Arbor, an event that she has been helping to get off the ground. Their boardwalk across a lake is so nice that the course crosses it 3 times. While there Andrea ran into CP regular Sharlene Deskins, who was visiting family in the area. Meanwhile, co-event director Colin Phillips was working in Berlin, and got to check out the pretty Hasenheide parkrun, where he ran into CP parkrun pioneer Lara Ehrenhofer, who is now living very nearby. 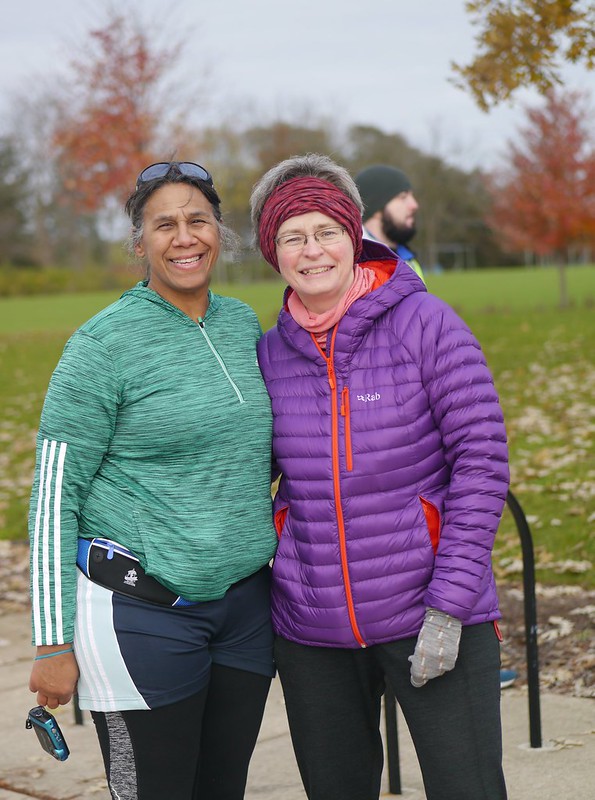 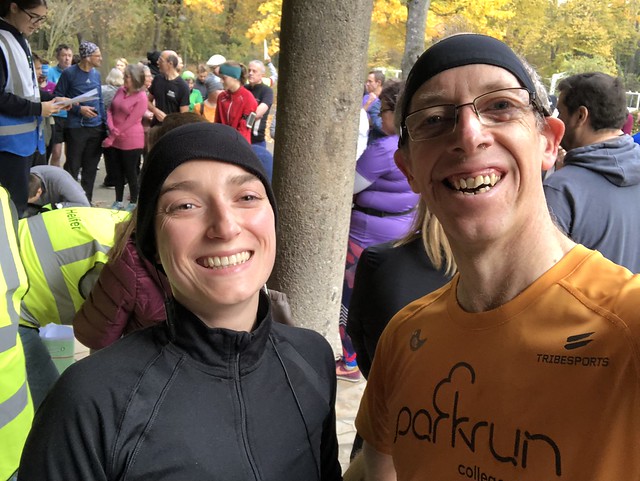 As people’s lives move them to new places we see turnover in our team of run directors, so we’d love to bring some new people into the crew. Please get in touch if you’re curious about what this involves. Ideally, each RD would lead an event just once or twice per quarter. Also, we’d love to find a couple of people who could help with our online communications (Facebook, Instagram, run reports, etc.). These are all fun roles, as you get to be surrounded (in person or online) by so many people feeling happy.

Also, if you have friends or relatives who would be interested in bringing the same fun that we enjoy every Saturday in College Park to their own community, then drop us a line and we can help. We’re already working with a number of teams that are developing new parkrun events in different states.

A couple of upcoming attractions:

THANKSGIVING PARKRUNNING. This year we’ll have events on BOTH Thanksgiving Day, Thursday Nov 22nd, and in our regular Saturday morning slot. Join us to run, walk, or volunteer for any of those. Bring family! Or take the opportunity to head over to Kensington parkrun, which will also be holding a special Thanksgiving event.

NEW YEARS PARKRUNNING. On January 1st we’ll again hold a special festival of parkrunning. Kensington parkrun and Leakin Park parkrun (Baltimore) will both hold 8:30am events, and College Park will start at 10:30. Do one or do a double, and then be sure to join us for a big brunch afterwards at The Board and Brew.