“I was running 10-minute miles, and yet so many people were cheering for me along the trail!

One highlight of this week’s parkrun was the return to running of Larry Washington. Larry last ran with us 18 weeks ago, due to injury. But he has been a near constant presence as a volunteer in the interim, becoming a leading dispenser of high fives at the finish line, and even filling in as Hump last week. That’s why so many community members were happy to see him running with us again. 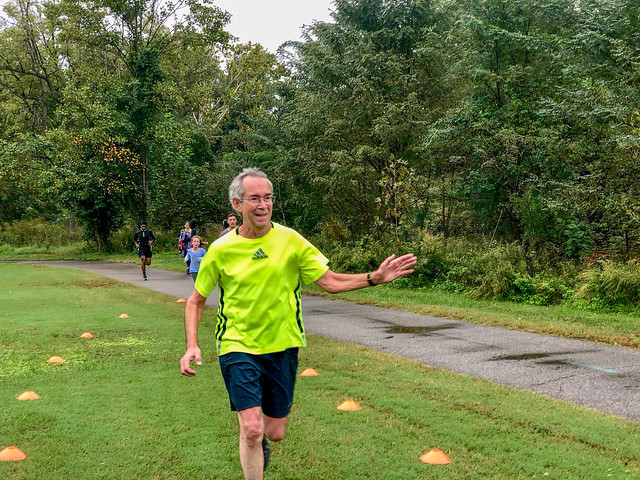 Anne Gaston last ran with us 101 weeks ago, in our 3rd ever event. She was back this week, together with her 4 daughters. Eldest daughter Phoebe Gaston is one of the CP parkrun ‘pioneers’. This weekend Anne was visiting from CT, and sisters Zoe, Sophie, and Keiley from NY, SC, and NC. So, naturally they all wanted to come to parkrun. Anne proceeded to break our longest standing age-category record … the one that she set when she joined us previously. 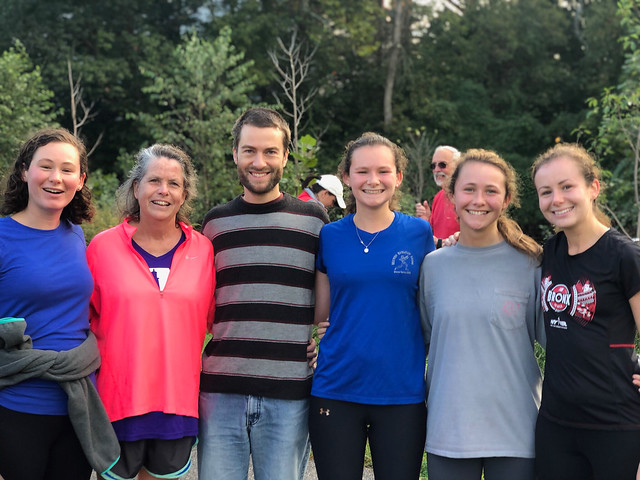 Alia Abdelkader first joined us one year ago, for our UMD Homecoming 2017 parkrun. Then she graduated and moved to N. Virginia. Some time later she started regularly joining Roosevelt Island parkrun. This weekend was Homecoming  2018, and Alia was back for her second College Park parkrun, setting a big 10-minute PB. She was pretty pleased about that. 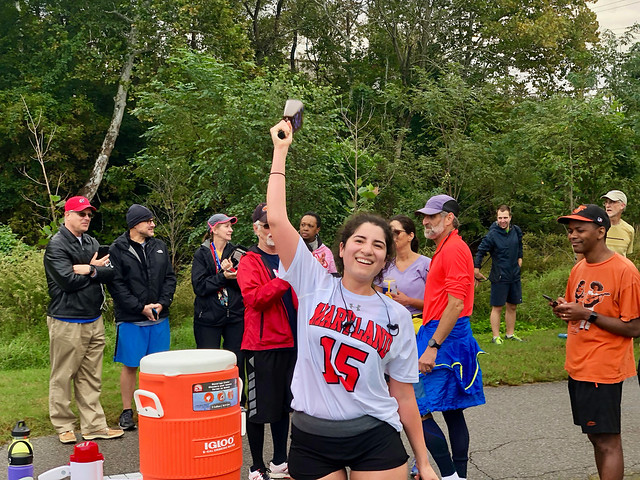 Gloria Cottman had surgery this week (success!), and shouldn’t be running right now. So she joined us for a walk this week instead. No problem, as there are more and more walkers at CP parkrun. 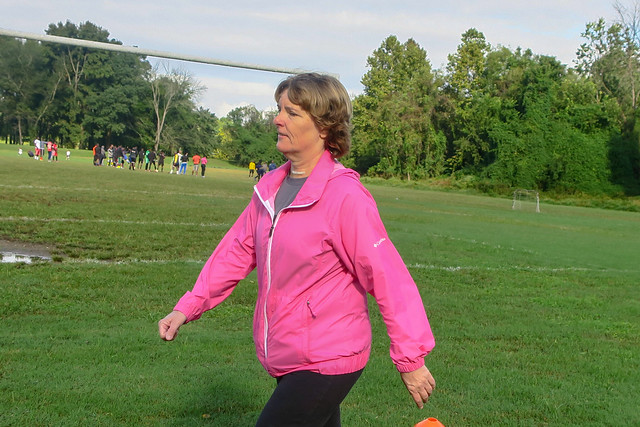 Emily Jensenius is another person on the comeback trail. She alternates stroller-pushing weeks with husband John, but she has been taking big chunks from her College Park PB, including another minute this week, heading back towards where she was when she was a regular at Oxford parkrun in the UK. 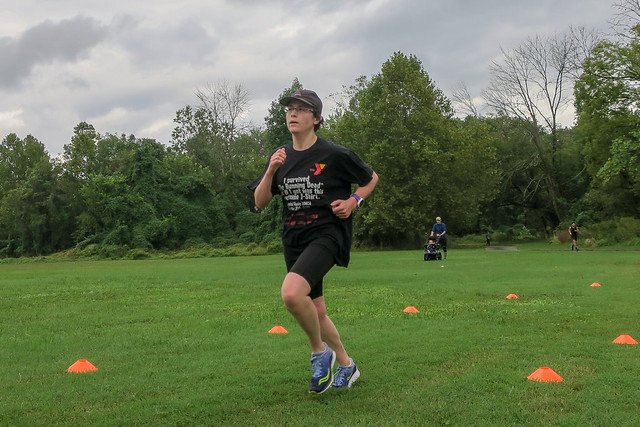 Clark Ridge staged a bit of a come-back this week, too. Life happened, and he rolled up at the park almost a minute after the start. You may have noticed him flying past in the first mile. He was gaining on everyone, but in the end he ran out of trail. 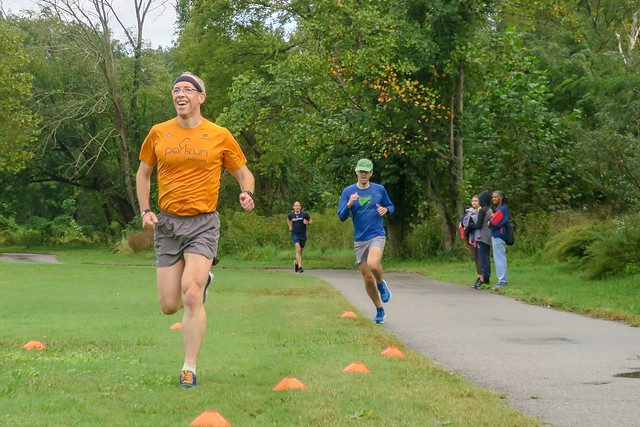 Yes, it was a week of comebacks at College Park parkrun. And great weather. And milestones. And visitors. And a lot of PBs. Really, the cooler weather brought out a whole lot of PBs.

The most visible milestone was Russell Dickerson’s 50th parkrun. When we had a big Memorial Day weekend event in May 2017, a friend of Russell’s persuaded him to come along. He clearly enjoyed it, as he has been back a lot since then. Russell is an ever positive presence at parkrun, and he’s going to look great in his new parkrun 50 shirt in the near future. 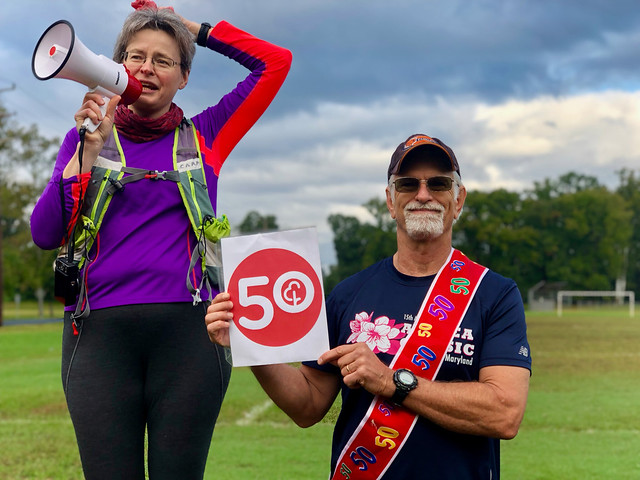 The other milestone was that College Park parkrun completed its 2nd journey around the sun. Event #104 was the final event of our 2nd year. So it’s hard (for me) to resist pulling out a few numbers. Whichever way you look at it, it’s a growing community.

Oh, and one more milestone that we reached this week was our 9,000th finisher. It was Alex Swisdak. 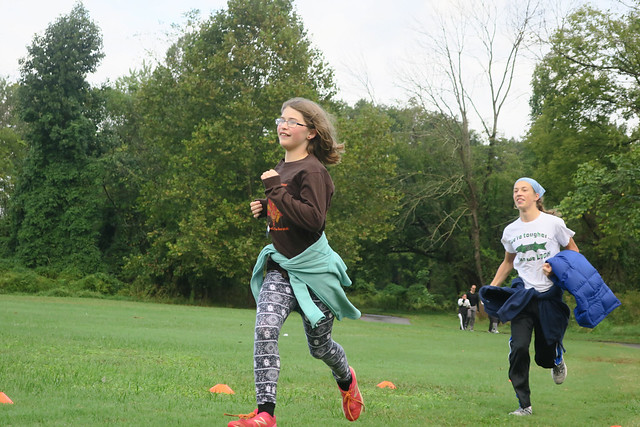 We welcomed some visitors from far away this week. Seamus Kavanagh has run nearly 250 times at Malahide parkrun in Dublin, where they run around a castle. He got a change of scenery this week at College Park. Meanwhile, Nigel Milius and Wendy Hare do most of their parkrunning in New Zealand, but joined us this week, en route from back home from the Arctic Circle, where they keep busy as guides on cruise ships. 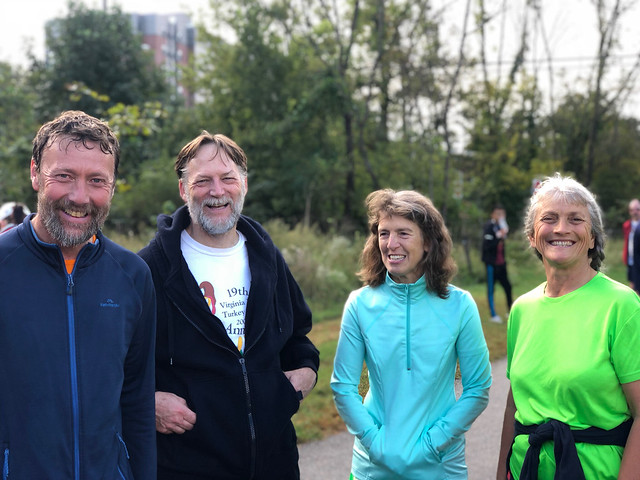 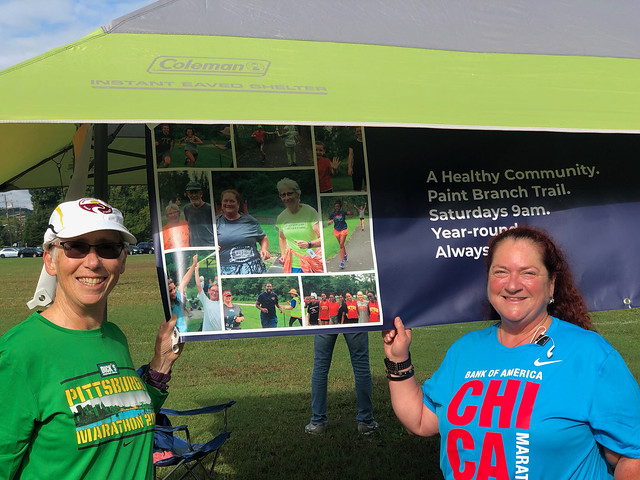 The cooler weather this week brought SO many PBs. 38 in all!

Cotter Rosenberg had been waiting for good weather to try to go under 20 minutes for the first time, and he made it, with half a minute to spare. Between injuries and mayoring and being in his late 60s, it’s going to be hard for his dad Duane to keep up now. 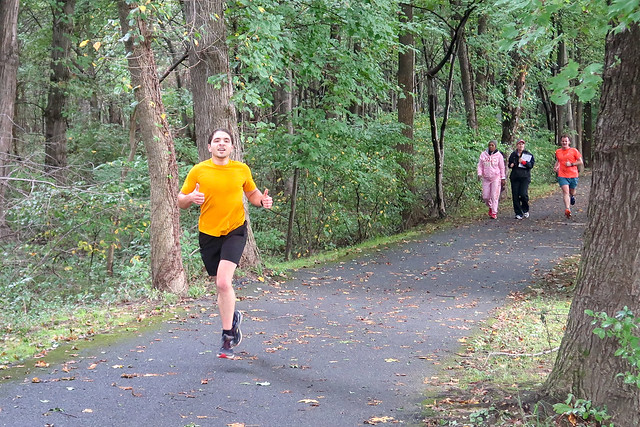 Evan Hirsche was another who went sub-20 for the first time at College Park, though we suspect that Evan has done this many times elsewhere. In Evan’s case it was a day without a puppy “comfort break” that helped his time.

Maria Breckert and her mom Laura Breckert scored a cool double PB. We were very happy to again welcome the young ladies of Elizabeth Seton HS cross-country team to parkrun. Maria runs with the team, and she shaved a few seconds from her PB. Meanwhile, Laura runs whenever the ESHS team joins us, and she has set a PB every time so far. Great job to both! 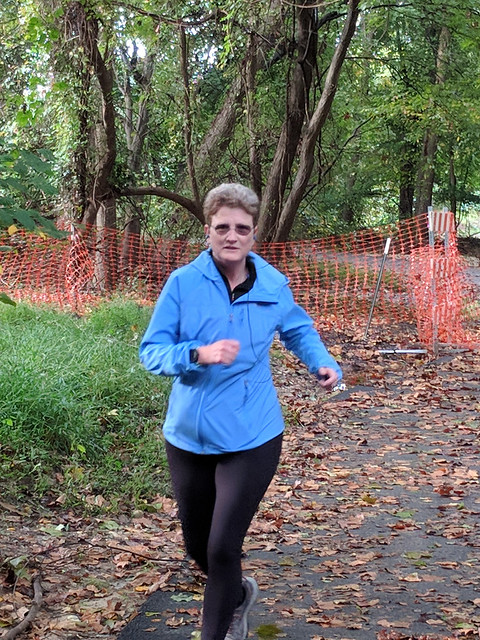 Another Seton family group was the Naleskis. Madeleine runs with the ESHS team and she set a PB. Her younger sister Molly didn’t set a PB, but that’s because she was pacing their mom, Carmie Naleski to a PB of her own. 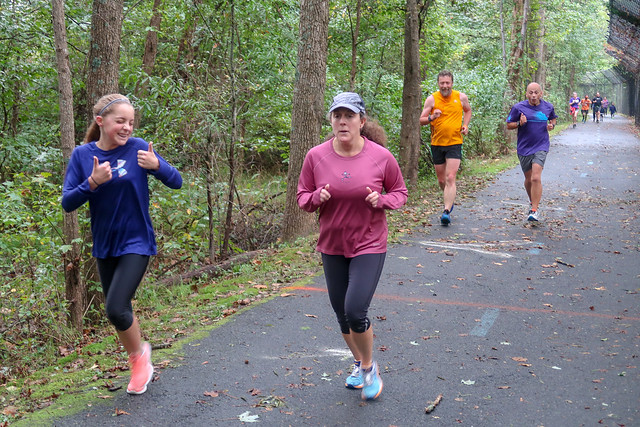 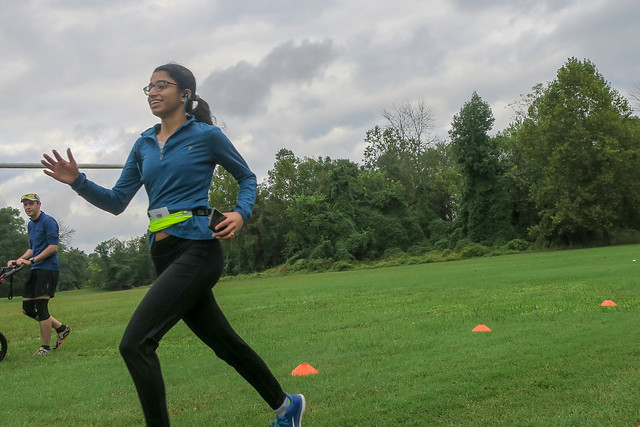 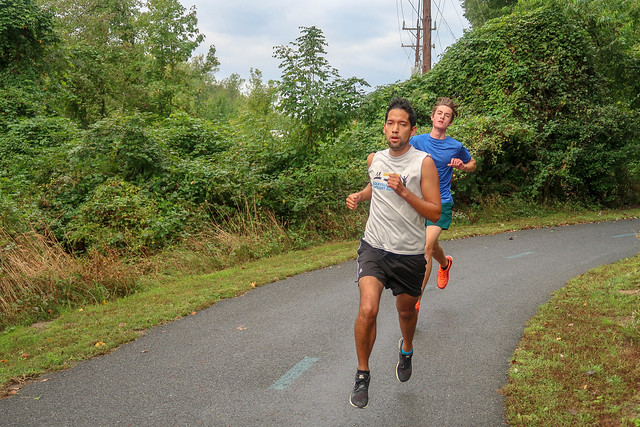 We are thankful for the volunteers who make parkrun happen every week. They don’t just cover the mechanics of the event, they also create the warm, fun vibe that we all enjoy. This week Lisa Wilson and Hump Plotts were back in their regular roles on the course. Brian Murphy and Nina McGranahan were timekeepers, Jen Murphy took care of finisher tokens, and Deborah Gayle and Ellen Hamilton did the scanning. Misha Bernard did tailwalking honors. We had an entire posse of token sorters at The Board and Brew: Valerie Silensky was joined by visitors Nigel Milius, Wendy Hare, and Elizabeth Sheridan. Chris McGranahan confidently directed the show  as run director, and Sam McGranahan used his steady hand to be photographer. And Andrea and Colin did this and that, as they do. 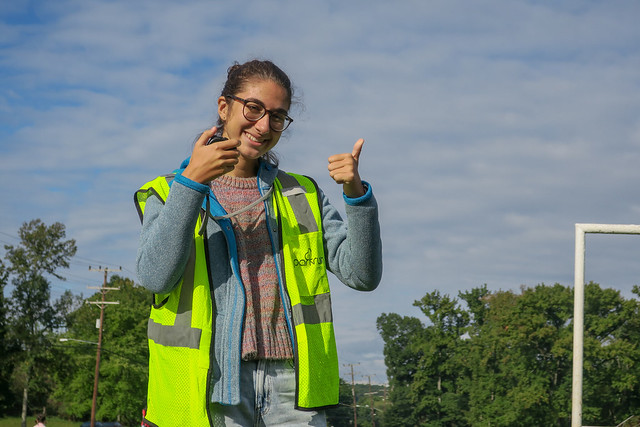 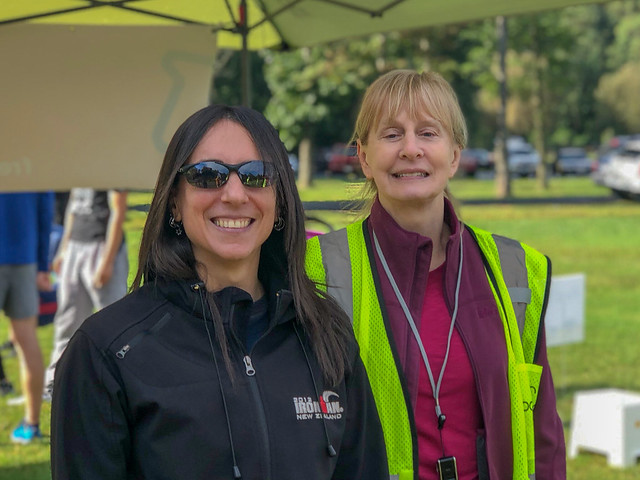 Now, listen up for the upcoming attractions.

October 20th: BIG DAY AHEAD. It’s our 2nd birthday -- prospects of cake are rather high. We will also be celebrating Xander and Tara’s 50 parkrun milestone (red sashes!), and also Brian Murphy’s 25-time volunteering milestone (purple cape!). You won’t want to miss this one. 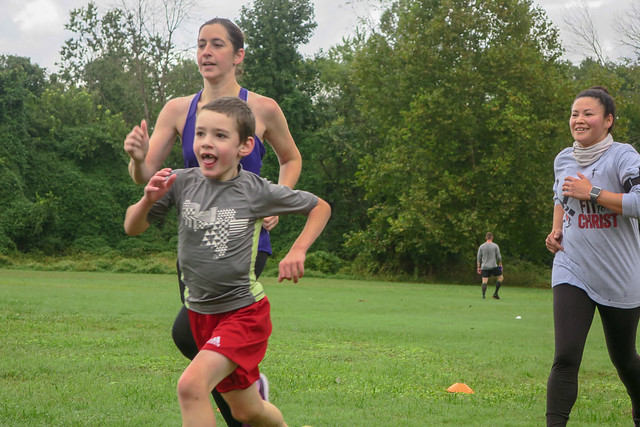 October 27th. WALKERS DAY & HALLOWEEN PARKRUN. You could run or walk as usual, but on this day we’re making a special push for walkers: we will be welcoming the nice folks from PG Parks Club 300, and also from the American Cancer Society’s Making Strides for Breast Cancer community. How about taking a break from running to walk with these folks and help to welcome them to our community? And we would love to hear from you if you would be interested in helping in some way with our new partnership with ACS and Making Strides. ALSO, it’s the parkrun before Halloween, so we’d love to see you (and/or your kids) in their costumes. 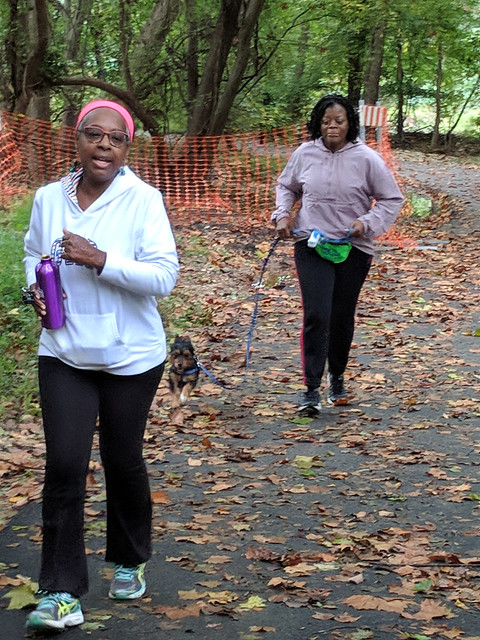 November 3rd: TREE PLANTING DAY. We’ll be teaming up with our friends at Prince George’s Parks & Recreation to hold another post-parkrun tree planting and stream cleanup. These events help to strengthen the watershed, and in future years we will appreciate the shade that the trees provide.

November 22nd: COLLEGE PARK PARKRUN TURTLE TROT!! We will be holding a special Thanksgiving morning parkrun. Thanksgiving is the world’s largest running day, with around 1 million Americas taking part in a running event to start the day. So our favorite running and walking event does not want to miss out on the fun.

It’s going to be a fun few weeks ahead! 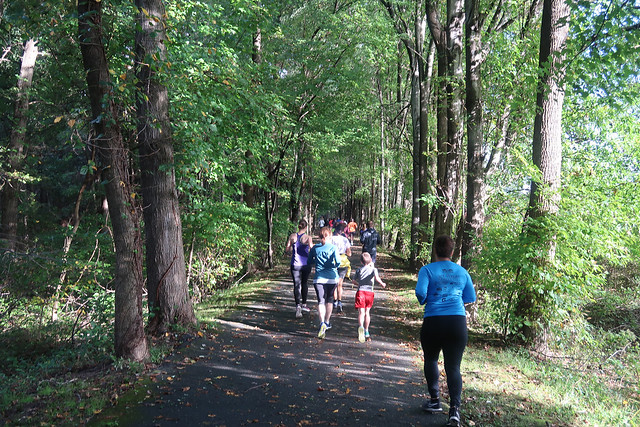