We had plenty to be thankful for by the time the tailwalkers returned around 10am last Saturday. But by the time some of us left the park closer to 2pm we had a whole lot more to be thankful for. It was a rather memorable morning for some of us. Let’s start with the run, and then we’ll get to the post-run afterwards. This one is a bit long, but the stuff at the end matters. 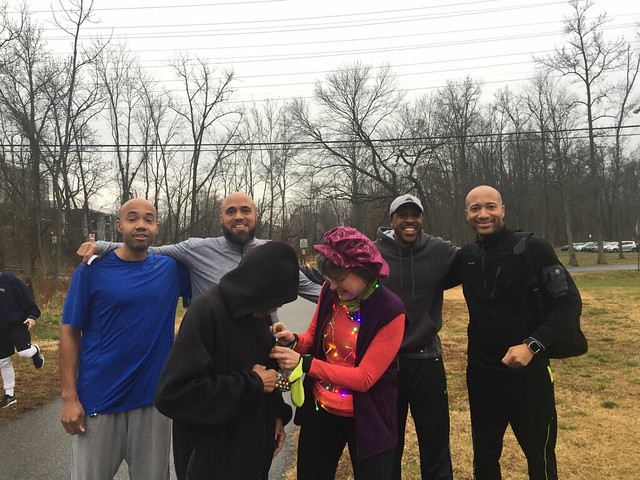 Hi! This is Colin, co-Event Director and one of this week’s volunteers. I’ll explain later why I didn’t run this week, and why Pam Marcus, this week’s Run Director, has better things to do than pen this run report.

We were happy to be back at College Park parkrun after a week off due to dangerous ice. We were thrilled that last week, despite the cancellation notice coming barely an hour before the 9am start, College Park parkrunners somehow made their way to 5 different locations. A couple each showed up in the results for Leakin Park parkrun, Anacostia parkrun, Fletcher’s Cove parkrun, and Roosevelt Island parkrun. And a few others showed up at College Park, with ice cleats, and enjoyed the trail anyway. Andrea and I made it to Roosevelt Island in the nick of time, and we got to sample the great new coffee shop that they’re using for post-parkrun meetups. The coffee and the company at Central Coffee in Rosslyn are just lovely … but our hearts remain with The Board and Brew.

Last year our pre-Christmas parkrun was just as grey and damp as this week, and we had our lowest ever turnout of 25. This year there were 93 finishers, of whom 50 have run College Park parkrun at least 10 times. That’s quite a difference. We are thrilled by the resilience of the community. 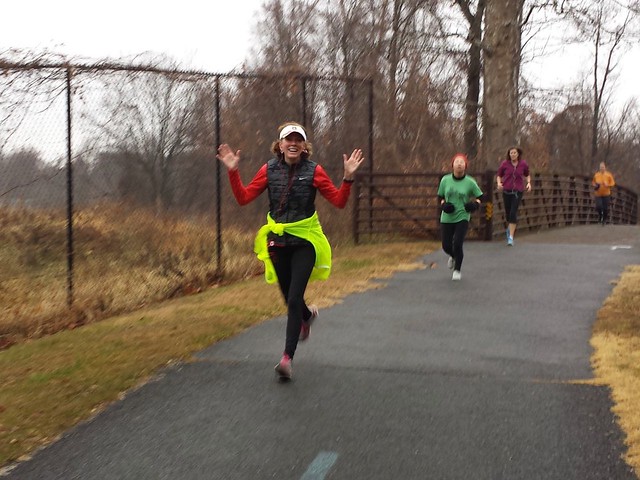 Our 11 first-timers this week included just one parkrun tourist. That’s about par for the course at College Park parkrun. But it was no run of the mill parkrun tourist. Euan Bowman is country manager for parkrun Canada, which has gone from zero to a dozen events in just over a year. Euan has a long parkrun history, as he was the founder of one of the very first parkruns, Basingstoke parkrun in the UK, which this week held its 512th event (!). You can read a cool story about Euan’s introduction to parkrun here. With nice mountains and charming Canadians to parkrun with, why would Euan choose to visit College Park? Well, mostly because it’s a great way to visit his sister and nieces, Vivienne, Autumn, and Natalie, who all live nearby. But perhaps it was also because he heard about the great coffee at The Board and Brew (it’s no Tim Hortons, but we love it). And perhaps also because we have such a great course. For his 91st parkrun, Euan ran his fastest ever time, and came *that* close to his first ever first finish. More impressive was the fact that Euan didn’t need to volunteer this week. He has volunteered 265 times previously at parkrun. 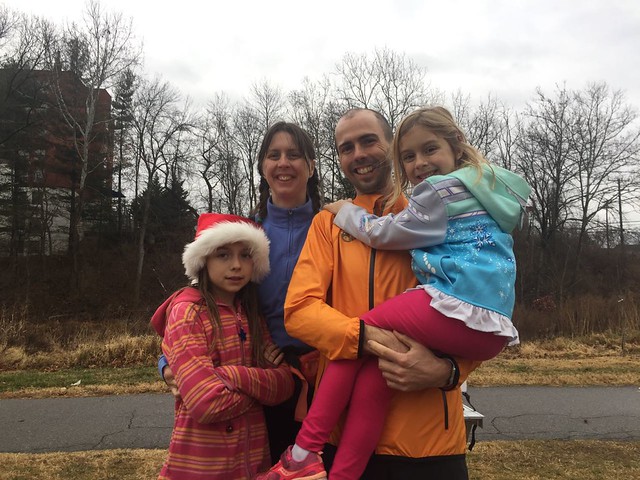 We had one official milestone reached this week. Katie Hirsche reached her 10-run milestone. A nice white parkrun shirt is yours, just as soon as the new shipment of 40,000 shirts reaches London in February. This week Katie helped push Tsegaab Hailemichael to a new PB on his 22nd parkrun. Congratulations, Katie! One unofficial milestone was that Diana Gough did her 25th parkrun, and so she is now halfway to a prized red parkrun 50 shirt. Just as important, Diana and her son Carlos celebrated Carlos’ 11th birthday this weekend. This is the “parkrun liberation” birthday, which means that Carlos gets to run without mom. He celebrated by running a 2-minute PB. Nice! We also had one other new 10-timer this week. Cathy Flynn has reached this point in just 12 weeks, an achievement in itself. We had 4 new members of our 5-run club: Katherine Kirklin, Katie Murtough, Christian Ngassa, and Lina Sun. It’s great to see these folks becoming regular members of our growing community. 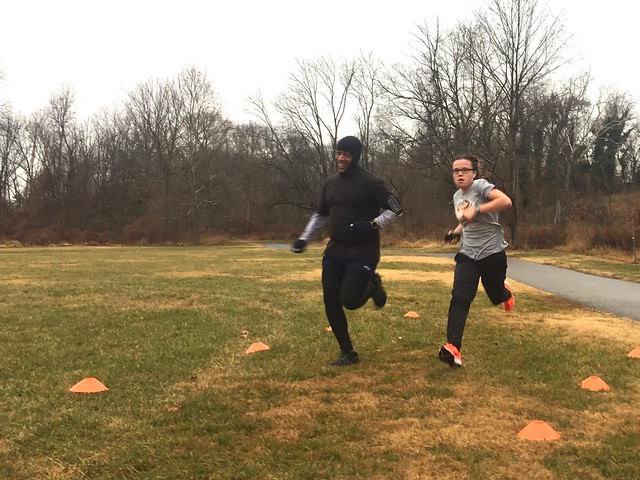 Other PBs this week included Janice Bernache, who was proudly sporting an apricot College Park parkrun shirt. Sales of these shirts help to support the free milestone shirts that more and more of our parkrunners are earning. Violet Ridge took a minute and a half from her PB on her 18th parkrun, as she tries to run as fast as she can before turning 9 years old. This means that it was also an unofficial PB for her baby brother Felix, who slept for most of the way while being pushed by dad Clark. Joan Myles got a 1-second PB on her 6th parkrun, and Steve Feld took over a minute from his PB on his 30th parkrun. Aside from setting these PBs, we’re really happy that Clark Ridge, Steve Feld and Cindy Feld are now joining our roster of core team members and Run Directors for College Park parkrun. You’ll be hearing more from them in the coming months. 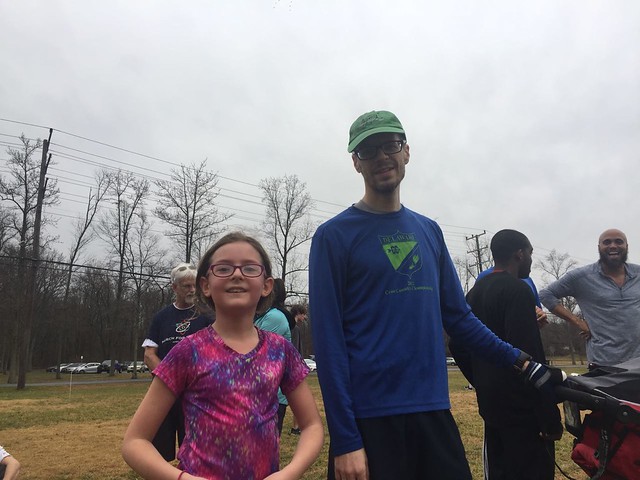 And there are reasons why we need new blood in the core team ...

Pam Marcus was our intrepid Run Director this week, for the fourth and penultimate time. This sounds like bad news, but it’s actually great news. Pam and a team of College Park regulars now have permission from Montgomery County Parks to start a new weekly parkrun on the Rock Creek Trail in Kensington. Weekly practice parkruns will start on February 3rd, with the official launch hopefully in early Spring. At present their top priority is to raise the startup funds needed for Kensington parkrun, so if you know of organizations that share our values and might be able to help, we’d love to hear from you. We are excited to see a sister event start in Montgomery County, and we’re looking forward to a lot of local parkrun tourism between the two events. You can follow the development of Kensington parkrun on their new Facebook page, or by joining their mailing list at kensingtonpracticeparkruns@yahoo.com. 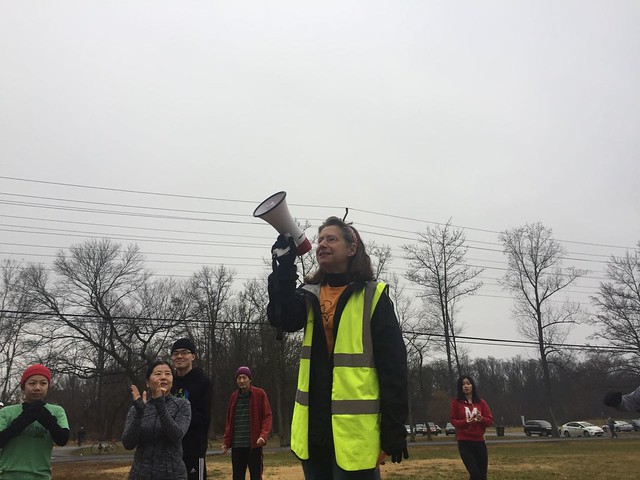 Our wonderful volunteers got an extra surprise this week. An anonymous parkrunner delivered gift cards to CP parkrun Towers under the cover of darkness on Friday night, and we had the pleasure of handing them out on Saturday. Two parkrunners had the extra fun of delivering them to Hump and Lisa en route. We love our volunteers, but this week they went above and beyond the call of duty (read on …). In addition to stalwarts Hump and Lisa (countless volunteer occasions), JJ Su completed his 10th time as volunteer this week. Jenn Augsburger is so helpful that we sometimes have to encourage her to run (13 runs, 14 volunteer stints). Dan Sarmiento kindly jumped in at the last minute. Bernard Kelly kept track of times. And Diana Gough was tailwalker - she is about halfway to her 50-run milestone *and* to her 25-volunteer stint milestone. Thank you all! 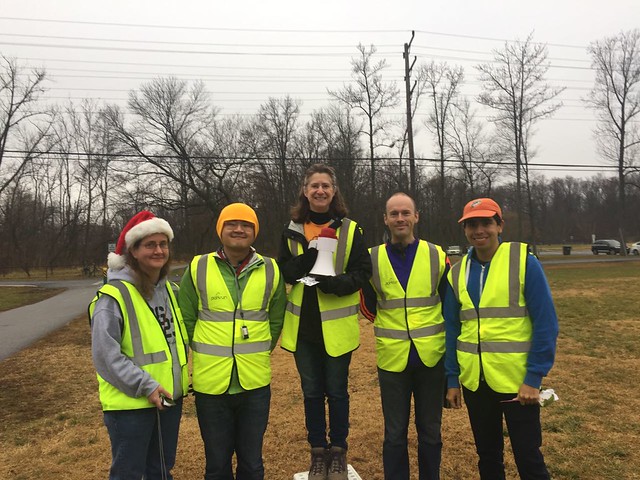 Please read this. All of this seemed like a normal warm-and-fuzzy parkrun morning, until the tailwalkers returned, and we learned that we had a missing parkrunner. An elderly parkrunner who came with family members had not yet returned. At first parkrun volunteers set out to check the trail: by foot, by bike, and by car, also checking businesses on Baltimore Avenue. After those searches all came up blank the police were called in. This was the M-NCPPC Park Police, and we were very impressed indeed with their response and with their professionalism. The search eventually included vehicles, dogs, horses, a helicopter, and a profiler. The works. The trail searches found nothing, but by 1:30 the police were able to confirm that the lost parkrunner was safely back home, about 10 miles away. Everybody was intensely relieved, though also a bit shaken by the experience. 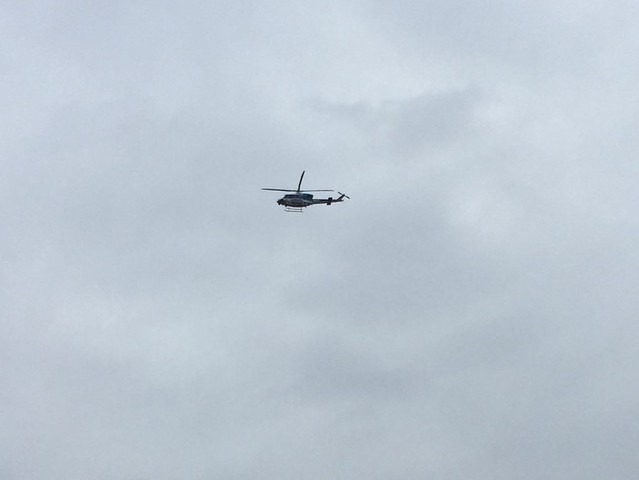 What happened? It appears that the elder parkrunner had made it to the turnaround in good time. Lisa’s photos turned out to be invaluable this week. And then this parkrunner made it most of the way back to Hump on the return, before turning back north on the trail. We are not sure why. They exited the trail before meeting the tailwalkers, and made to to Route 1. At which point they walked the mile north to IKEA and got help calling a taxi from there. The good news is that our lost parkrunner was safe throughout. The bad news is that they slipped through our safety net.

So, what can we do? At parkrun we have rules that help with safeguarding for young children. But we have nothing specific for elders or other at-risk groups. And it is hard to make rules without undermining autonomy and respect. As a parkrun team (locally and nationally) we are taking various measures to respond to this incident. But one of the most useful responses is in your hands: the more you are attentive to other parkrunners, especially those at risk, the better we will fare. In fact, it was thanks to a couple of very attentive parkrunners that we were able to reconstruct what happened to our missing parkrunner this week. We have the utmost admiration for our elder parkrunners. Say hi to them, before the run, and during the run. Welcome them at the finish. None of this is demeaning, and it could help us to notice if somebody does not return. 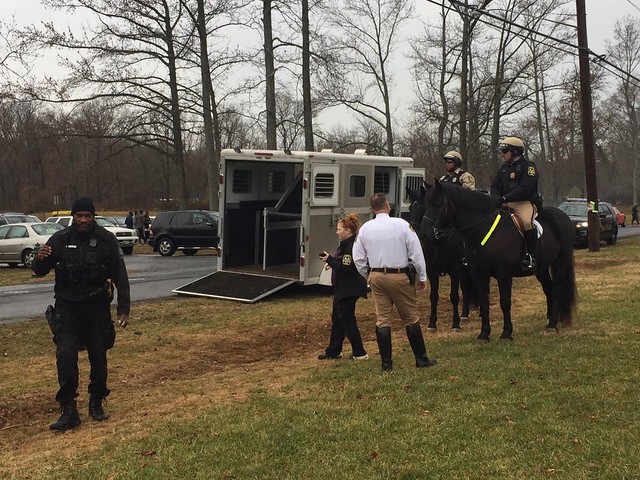 Holiday parkrunning. Since you’re likely reading this during the holidays, we need to update you on the remainder of our holiday parkrunning. It’s going to be a little chilly, so wrap up warm. But don’t let the temps keep you from enjoying the outdoors with friends.

Monday January 1st. I must admit that I’m really looking forward to this one. On New Year’s Day I’m turning 50, it will be my 50th parkrun, and we’re teaming up with Leakin Park parkrun in Baltimore for North America’s first double parkrun. I ran my 49th parkrun last week at Roosevelt Island, so that’s why I’m holding off until New Years to do the 50th. Double parkruns are a New Years tradition in Australia and the UK, but it has never been possible on our continent until now. It’s going to be cold, but we will be thrilled if you can join us. We’ll run at 8:30am in Leakin Park - let’s help them to set another attendance record - and then we’ll zip down to College Park for our 10:30am parkrun, a co-production with the wonderful folks at Prince George’s Running Club. There will be (cold) cake. And there will be a big post-parkrun gathering at The Board and Brew in College Park, to which all are invited. You can read more about plans for the New Years event(s) in this news item. 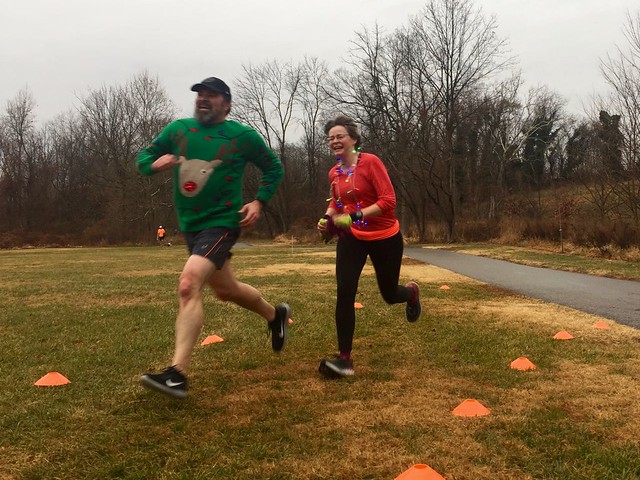 Two quick parting thoughts. Some of our regulars are on tour this week for the holidays. Run Directors Brian and Jen Murphy are vacationing in Australia, and they already have two parkruns under their belts. It was cool to see that they had already finished their Saturday parkrun in Melbourne by 5pm Friday our time. They did another parkrun in Melbourne on Christmas Day, and rumor has it that they may be taking in 3 more over the New Years weekend. At the other end of the temperature spectrum, I was wondering on Saturday where Xinzi He was. Her smile has been a regular feature of our parkrun this Fall. And then I got a text on my phone from Boston, where Xinzi had visited one of the trial runs of the soon-to-be Jamaica Pond parkrun, in the snow. We have been working closely with the Jamaica Pond team, and they’re doing great things for their community in Boston. So I was thrilled to see that Xinzi and her friends had met up with these new friends in Boston. Pictures below. 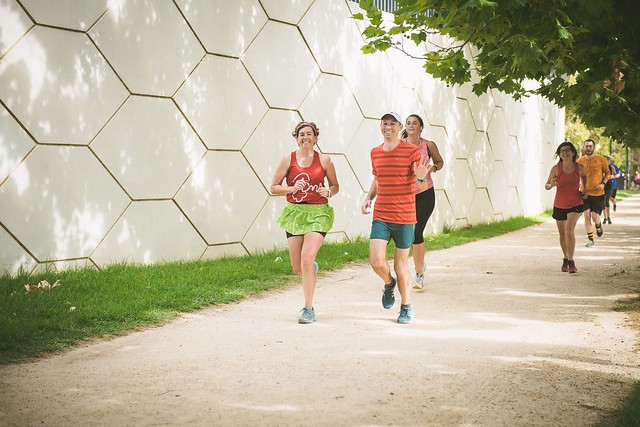 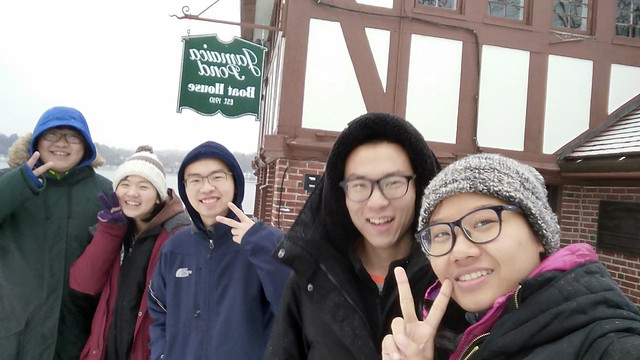