9am Friday we did not have high hopes for this week’s parkrun. Snowstorm Stella had been a bit of a letdown in our region, but the frigid days that followed made our favorite trail an icy mess, especially the bridges. But whether it was Mother Nature or the parkrun weather fairy or the inevitability of spring, by Friday night it just needed a little extra nudge to get the course ready for you on Saturday morning. So we’ll add shoveling snow off bridges to the list of fun things to do on a Friday night in College Park. 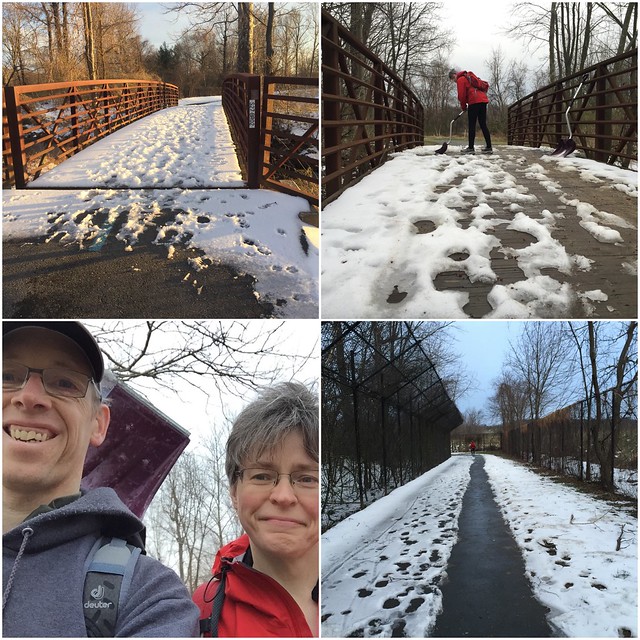 This week a few more regulars reached mini-milestones. Keri Pierce, one of our regular PGRC crew, did her 5th College Park parkrun. And we had a distinguished group of new members of our unofficial 10-club. This included James Moreland, who knows a thing or two about organizing running events, and who has now done 30 DMV parkruns. And Jen Murphy of MCRRC (this week’s first female finisher, and daughter of Feburary’s parkrunner of the month Gus Campbell). And then there’s Rory Murphy, who is approaching 200 total parkruns, and who will soon be welcoming you to a lovely new parkrun in Leakin Park, Baltimore (yes, that Leakin Park). And finally, Andrea Zukowski, our dear leader, who will surely earn her volunteer milestone shirt long before she earns her shirt for running. 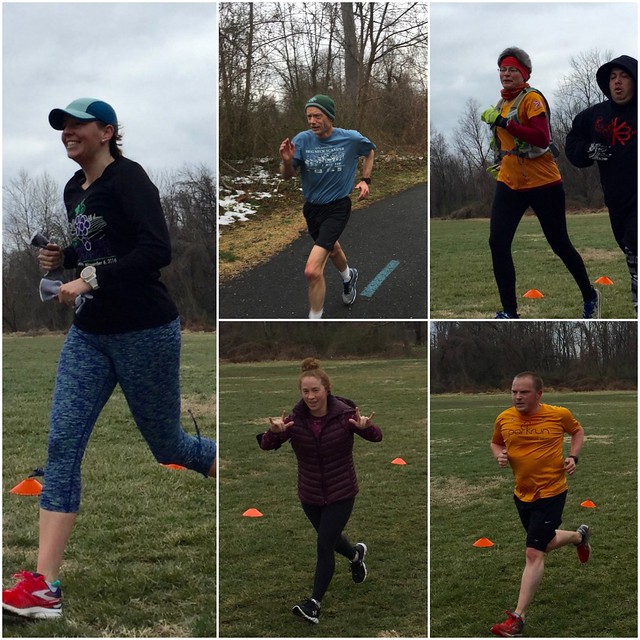 We’re always excited to meet first-timers. This weeks crew included Cathryn Burby of the American Cancer Society. Cathryn is spearheading a partnership between parkrun and ACS, and we’re looking forward to working together to help reduce cancer risk in our community. (Cathryn also brought some delicious no bake cookies along for the parkrunners. Thank you!) Cathryn was joined by Diarmiud Coughlan, an avid parkrunner and researcher at the National Cancer Institute who is studying how physical activity can dramatically reduce healthcare costs. (Oh, and he was also today’s first finisher. Good running!) We were just as happy to welcome Ralph Dubayah to parkrun. We often see people out running on the trial on a Saturday morning and encourage them to come run with us. Ralph is one who took us up on the offer, as has Paul Wester, a second-timer this week. Welcome, guys! Stephen Camarano was a first-timer this week, another runner from the stable of parkrun regular Jim Parsons. And we were happy to see Brent Mattocks and his mom Marlene Mattocks join us for the first time. Family meetups are still good when the kids are grown up.

We had a number of notable PBs to celebrate this week. In her 13th parkrun, Yancira Amaya was almost 2 minutes faster than before, dipping under 30 minutes for the first time. Whatever she had for breakfast, we want some of it! We also had impressive new achievements on both ends of the age scale. 4-year old Xander Mease (and his mom Tara) took a chunk off their PB, and then Xander promptly ran off to play with Scout the dog, who returned after a week off while parkrun regular Ken Leonard ran his second marathon in 3 weeks (and a BQ!). 10-year old Carlos Gough improved his time by a big chunk, and he’s now only 1 parkrun short of reaching his 10-run milestone (hint: join us on April 15th for that; there might be cake too). Tami Graf set a new age-category record in the VW80-84 division, and in doing so she pulled youngster Gus Campbell (VM70-74) to a big new PB. Hands up if you would love to be as active as Tami when you’re 80+. Marvin Russell also set a PB, on his 14th parkrun. He is a slip of a lad, running in the VM65-69 division. 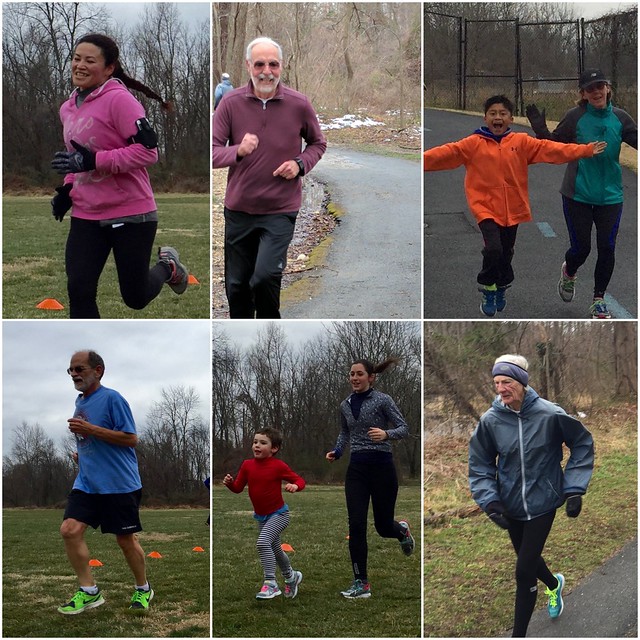 We’d be nothing without our wonderful volunteers, who this week included a mix of stalwarts and newcomers. College Park parkrun isn’t the same without Hump Plotts at the golf course. And Lisa Wilson is a regular at the turnaround point. (She thought she was seeing double this week when she saw two balding Irishmen in apricot parkrun shirts arrive within a couple of minutes of each other.) Robert Hopkins was your tailrunner. Regular runners Steve and Cindy Feld handled timekeeping and barcode duties, and Padraic Ward added yet more Irish charm to the event as our tokens guru. Brian Murphy was speedy enough that he could run and then take over from Steven Camarano’s dad as second timekeeper (sorry, we forgot your name). And me and Andrea had the hopefully rare role of snow wranglers, among other roles. 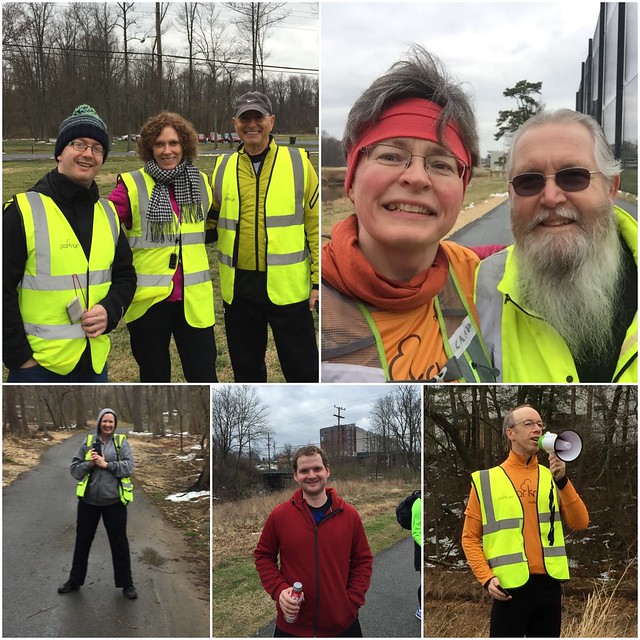 As usual you can follow us on Facebook, Twitter, or Instagram, find loads of hi-res photos on Flickr, or join our Strava page! Why the heck would anybody bother with Strava, we hear you ask? It's a way to follow one another's progress and give encouragement during the weekdays in between parkruns.

It's shaping up to be a spectacular early spring day this Saturday, so you won't want to miss out on this week's parkrun. We'll see you at 9am. Don't forget your barcode.