In this month’s newsletter, we get 2016 started with a brand new event and some brand new records, and we celebrate as a nonagenarian and a runner 80 years his junior both reach parkrun milestones on opposite sides of the world.

Rarely do I find myself in the right place at the right time. The protests that gave women the vote were long gone before I arrived on the scene. All the tea was already floating in the Boston Harbor when I got there. And I wouldn’t have believed Steve Jobs’ and Steve Wozniak’s vision in 1977 even if I hadn’t been 8 months from being born.

Last Saturday was different. I was there at the right place and the right time to witness and even to aid in a revolution: Fletcher’s Cove, DC, at 9:00am. Maybe parkrun won’t change this country like suffrage for women or independence from tyranny, though it is certainly a vision whose time seems to be coming in our part of the world. But to be honest, I always knew that it would.

Well-meaning parkrunners from around the world have often said to me that they can’t understand why parkrun hasn’t taken off in the US as it has in other parts of the world. I never doubted that it would grow, just as I never imagined that it would happen overnight. Just like the parent who wishes to slow down a child’s aging so that she might savor every moment, I am content to nudge parkrun USA along even while I take the time to enjoy its infancy.

Many people were there to watch Fletcher’s Cove take its first giant step, which saw a massive turnout of 166 runners, including the Mayor of DC, Muriel Bowser; parkrun CEO Nick Pearson; and parkrun USA ambassador James Kemp. But so many of you weren’t there, so let me set the scene and fill in the details for you.

It was a cold and overcast morning. A plane on its way to Reagan National Airport interrupted the pre-run brief. Event directors Henry Wigglesworth and Darrell Stanaford were there, with their families and an army of volunteers to lend a hand. A nice lady who used to run at St. Albans in England was thrilled to see my 50 shirt since she was in hers and her husband was in his 100 shirt and, I imagine, it told her that she again would have that parkrun community that she’d missed since moving to DC 6 months earlier. I saw fast runners and slow runners and people glad to have been a part of this and eager to do it again next week. Just about the only thing that I didn’t see, when all was said and done, was barcode number 79 (may it find its way back to the fold one day). 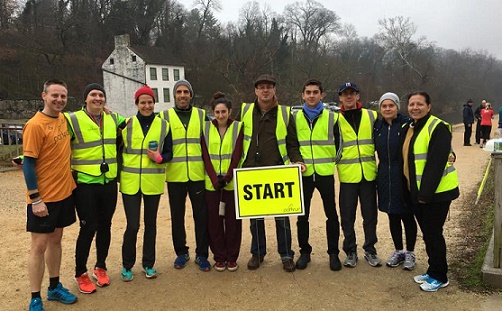 The Fletcher’s Cove team, parkrun USA ambassador James Kemp, helpers from future events (stay tuned…), and if you squint, yours truly and Melinda Beaver, a fellow parkrun tourist from Durham, NC, in the background.

Julie from parkrun USA (get in touch)

A summary of the statistics from last month’s parkrun USA events:
Number of runners - 584
Number of first timers - 135
Number of PRs - 79
Number of volunteers - 96

Congratulations to Lindsey and Paul for helping us to punctuate a great year of parkrun in 2015 and to set us up for a year of firsts for parkrun USA in 2016! 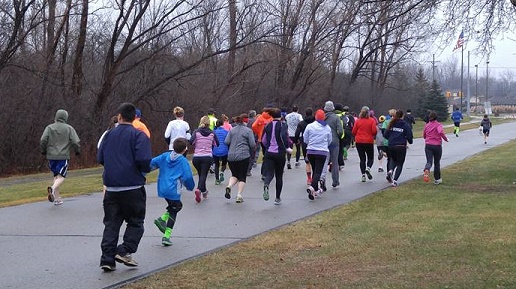 They’re off to a great start in Livonia and around the country!

Here, we feature one of the more than 650 parkruns around the world. This month, we are back Down Under to celebrate a special milestone for an extraordinary parkrunner.

The place: Brightwater parkrun on Queensland’s Sunshine Coast. Located less than half a parkrun away from its nearest parkrun neighbor, Kawana, this event is just a stone’s throw from the beach and borders on the Mooloolah River National Park. The course is a mostly flat out-and-back with a lake, some bushland, parks, and a waterfront to distract from what may be a frightfully hot run during some times of the year. Their 983 runners don’t seem to mind, or they’ve simply adjusted after 63 events. Brightwater parkrun had record-breaking attendance on January 9, 2016. Would you like to know what brought out so many runners?

The man: Norman Phillips, or just Norm to his mates. Starting at nearby Kawana parkrun in 2014 before making his way to the newer Brightwater event, 92-year-old (that’s not a typo either) Norm celebrated his 100th parkrun last week, and nobody wanted to miss it. And why should they when Norm’s accomplishment makes him the oldest parkrunner to reach this milestone? Norm started running in 1986 in his native England and found a home with parkrun, thanks to his son. And slowly but steadily over the last two years, Norm has managed to make a huge impression on those who have met him and others who have only heard his story. He’s an inspiration, and we wish him all the best as he strives for his next milestone!

To hear this story from the man himself, check out parkrun Australia’s Youtube video. 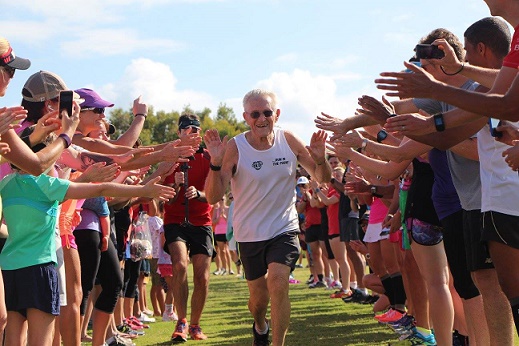 Congratulations to Anne Vail on reaching her 50th event! (As you’ll see below, parkrun perseverance runs in the family!)

parkrun USA’s newest event started with a bang and 166 runners. Congratulations, and welcome to the parkrun family! 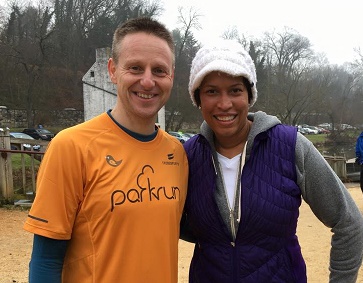 DC Mayor Muriel Bowser, fresh from completing her first parkrun, with James Kemp, all-around good guy and parkrun USA ambassador extraordinaire. Thanks to both of you for coming along to Fletcher’s Cove for the inaugural run!

Hi parkrun USA,
Having just recently returned from a Christmas vacation with Mickey Mouse in Florida, I wanted to share how much I enjoyed Clermont Waterfront parkrun during my stay! I was lucky enough to take part in 4 runs over the Christmas period, and you guys were so friendly and welcoming at every one. It was a fantastic place to run with fantastic support! (Although the humidity was something to endure - the hotter it got, the slower I got! )
Thank you so much for a holiday highlight. I can't wait to return!
Regards,
Louise Brown, parkrun tourist from Northala Fields parkrun UK 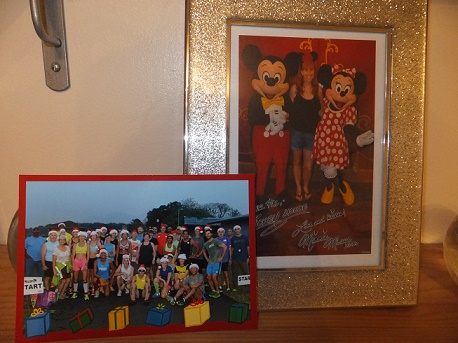 Hi parkrun USA,
I had the most amazing parkrun day. A massive thank you to Max, Philip, and Dale. You all do an EPIC job, and I cannot wait to come back one day. 
All the best,
James Ball, parkrun tourist at Crissy Field 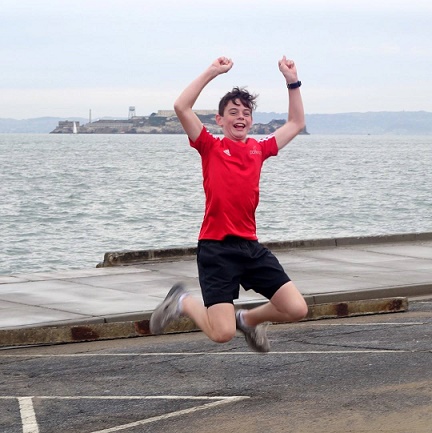 Hi parkrun USA,
I was a parkrun tourist for the first time last weekend at Crissy Field, San Francisco. Ironically, they don't have any hills on their course!
Many thanks,
Chris Walker, Durham, NC parkrunner on the road

Hi parkrun USA,
I can't thank you guys enough for your parkrun hospitality this morning, especially Dale for the ride back to our hotel!
Regards,
Emma Malcolm, parkrun tourist at Crissy Field

Hi parkrun USA,
As your visitors from across the Pond, my wife Jill and I would just like to say a big “Thank you” to all those who organised, volunteered at and ran the Durham, NC parkrun. The spirit of parkrun is alive and well in North Carolina! The run was a lot of fun, the course a good challenge and meeting everyone for breakfast afterwards made our day. If you live in Durham and haven't tried the parkrun then you're missing out. The four of us that made the journey from Winston-Salem, NC, (Jill, her father John, Malcom and me) all agreed that the outing helped make our Christmas. Lovely to meet everyone and thank you again.
Best of luck for 2016,
Christopher and Jill Convey 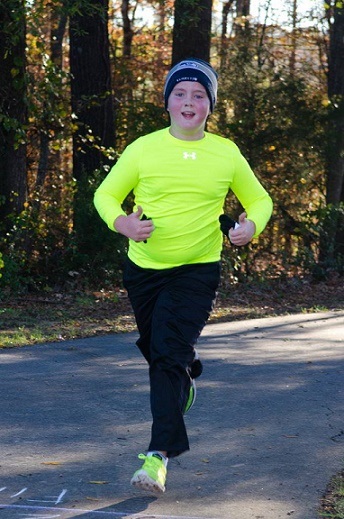 What do you do at parkruns:  Run or volunteer, play with sticks, stretch on rocks, cheer parkrunners

How has parkrun changed your running:  parkrun started my running! I got involved in the local parkrun in Queensland with my mom and am glad to be back with it again in the USA. I like running in races and hope to run a half-marathon this year.

What do you like about parkrun:  That people of all skill levels can run and participate every Saturday. I like the community, running with friends and family. I’ve made great friends at parkrun, people that care about me and encourage and inspire me to do better. And breakfast!

Most memorable or funniest parkrun moment:  One of my early parkruns in Queensland was in pouring rain. There was a great picture of me and mom running that day. And then we had a heavy rain come down at one of our Durham parkruns. Splashing on the path, no one is going to come get you; you have to finish it out. I like running in the rain a lot! It’s fun. It’s also memorable seeing the wildlife on the course: kangaroos in Queensland and deer in Durham!