In this month’s newsletter, we look forward to parkrun’s 10th anniversary celebrations, reflect on what parkrun’s growth around the world could mean for parkrun USA, and travel to New Zealand for a glimpse of parkrun life in the southern hemisphere.

While parkrun has taken off in a number of countries around the world, it’s still in its infancy in the US. However, I don’t doubt for one minute that we’ll grow and that parkrun will explode in the US like we’ve seen it do elsewhere. This belief is not steeped in an awkward optimism that makes people nervously seek to pacify me once I get into full "I love parkrun!" mode!” Rather, it’s because parkrun makes sense.

Think about it. How many times have you told a friend, coworker, or family member about parkrun? Ten, 100, 500? (If you’re like me, then this last number is about right.) And how many times did that person look at you and say, “That sounds like the worst idea ever.”? I’m guessing none. Now, how many times was the response akin to a light bulb turning on, followed by an “Ohhh” that isn’t like “ewww” or “ho-hum” but like “Ah-hah!” or “Of course! Why isn’t this already a thing?!”?

parkrun is a lot of different things to a lot of people: it’s a reminder that skipping those mid-week runs has consequences; it’s another opportunity to try for a PR; it’s a time to catch up with friends; it’s a “gateway drug” to 10k’s, running clubs, fancy watches that count ounces of sweat, and beyond; or it’s about doing something healthy for the mind and body.

Just as the people of the UK, Australia, Ireland, and a host of other countries have come to realize all the ways that parkrun can be their own, this simple but fantastic idea is taking hold here and it’s spreading. Have you had a good time at parkrun? Tell people about it, and plan to join us to celebrate the first 10 years of parkrun while looking forward to many more years of it to come.

This section of the newsletter features a brief introduction to one of the more than 400 parkruns around the world. This week, we look at Cornwall parkrun in Auckland, New Zealand.

There have been 110 runs at Cornwall parkrun since July 2012. On August 30, they had 140 runners show up for the 8:00 start; their biggest attendance was 179 runners. Six volunteers helped out in what was described in the most recent run report as an event with a cold, bitter wind (that’s August in the southern hemisphere for you). The run report also mentions cows mooing the runners along the course, though they neglected to mention the chickens clucking their encouragement, as seen in one of the photos from a recent event. Cornwall parkrun is an out-and-back with mixed surfaces. Well done to Lian and the Cornwall parkrun team for putting on such a great event! 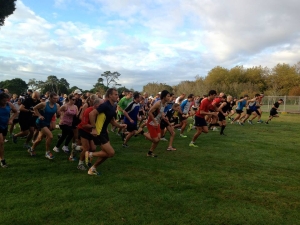 Please mark your calendars for the following special events at Clermont:
September 20 – Time change to a 7:30 a.m. start for the autumn and winter.
October 4 – International parkrun 10th anniversary worldwide event at 7:30 a.m. 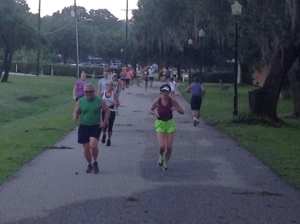 The three parkrun USA events will certainly be marking a decade of parkrun in their own way, even though we may be doing so several hours behind the rest of the parkrunning world. Are you wondering what your event directors have planned for the big day? Do you want to get involved? Just let us know, and we’ll gladly put you to work!

Good luck to all at Clermont parkrun this week. Loved the last two weeks there running in the heat but back in good old , grey sky , damp, cold UK. -Brendan Handrick

Thanks for welcoming the McAdam family to Durham Parkrun, we had a great time! -Alan McAdam

50 and 10 T-shirts sorted, barcodes ready & alarm is set!! The Evans family are visiting from Ipswich parkrun (UK) tomorrow morning. Picking up the hire car in about half hour so we have some transport to get to Clermont parkrun from Disney. Excited!!! -Jennifer Evans

The bad part of being out of town is missing parkrun. -Kathleen Hall, on Livonia’s Facebook page

Thanks to Julie and Martin for organizing Durham, NC parkrun and for making it happen every week, rain or shine, hot or cold, or flooded course. –Tom Griffin

We want to hear from more of our runners, volunteers, and parkrun tourists! Get in touch with me, leave a note on a parkrun USA event’s Facebook page, or send an email via the event’s parkrun page. 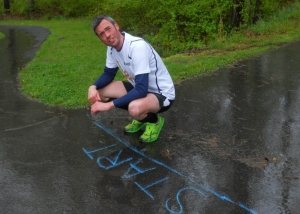 Favourite volunteer role:  Timekeeper. I used to be scared of this but love it now.

What do you do at parkruns:  Chauffeur Durham, NC 's event director to the course, wear a yellow high-visibility vest, and run whenever I get the chance.

How has parkrun changed your running:  I started in the UK at Brighton & Hove parkrun in 2008 and was hooked. I wasn't really a runner before, though my preferred sports (football/soccer, rugby, cricket) included lots of running. parkrun taught me the meaning of “runner’s high” and opened the door to my first marathon.  It has also grounded me in the US – 5k is 5k no matter which continent you are on. Setting a new PB (or PR, as the locals say) feels the same, whether in the Bull City or Brighton.

What do you like about parkrun:  I love to share everyone's runs – new PRs, first timers, etc. Seeing what this run means to people, especially the less confident runners, and giving something back by volunteering is a privilege.  What I like the most, though, is that it is so inclusive.

Most memorable or funniest parkrun moment:  100 was special for the obvious reasons, but Durham’s first was my most memorable run ever. I’ve had a lot of funny parkrun moments: my first experience of the NC humidity (not especially funny but I had to laugh or risk crying); seeing hair and sideburns and beards freeze during our very cold winter; or my funniest moment ever at parkrun in Hove when dry-heaving in front of a disgusted-looking Nick Cave after a hard run. It is a moment I will cherish, and no one can take that away from me, or him.