I was excited. Parkrun is back. Maybe only in New Zealand, a location whose existence I remain unconvinced, but all traditional indicators suggest New Zealand is real, and the Kiwis were going to lead the parkrun reawakening. In the early Saturday hours I was pumped.

I haven't completed a parkrun since my beloved home run along the Mighty Anacostia River took leave along with the rest of parkrun USA all the way back in March, and New Zealand would now take the first step back to my fading memories of parkrun bliss.

Now I know nothing of New Zealand other than their "Kiwi" label. So a bit hungover early Saturday morning (if you can't legally drink until 21 here then they should really ban it again after 40) I pondered the New Zealand time zone(s?). It's all the way around the world, right, so I guessed it's about 12 hours different? But half a day earlier or later? Does the international dateline come into play? As a traditional American my ignorance begins at our borders. I certainly don't speak... Zealandian? Maybe they speak Australian there? The greater point of my jingoism being: shortly post-dawn on the Fourth of July here in Washington, DC, what the heck time (day?) is it in New Zealand?!?

I passed the buck to Google, and the website replied that it was already Saturday night in New Zealand. So parkrun has returned! Maybe a world away but--on behalf of us all--our New Zealand brothers and sisters in running shoes officially completed parkrun today! Perhaps I overestimated the worldwide prominence of my (our) personal obsession, because "parkrun new zealand results" produced a fruitless and disappointing Google News search return, at least at 6am (EST) Saturday.

After a couple false starts I eventually figured the New Zealand parkrun URL to be parkrun.co.nz, where I followed the "results" tab at the top of that page. I clicked "Anderson" parkrun at the top of the alphabetically-ordered "This week's first finishers" page that appeared. And I learned that speedster Chey DEARING completed the 04/07/2020 Anderson parkrun in 17:24.

While I would require a bicycle to finish a parkrun in 17:24, myself, Chey remains my inspiration today. And so in a couple hours I will join him and all of our New Zealand counterparts, at least as much as I can, by running a July 4 (not) parkrun. 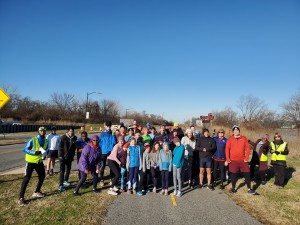 Forty-four parkrun all-stars dashed, moseyed, cantered, and otherwise strolled to complete the 107th weekly incarnation of the increasingly prestigious Anacostia parkrun. A good time was had by all, including our international contingent of tourists counting a pair from Australia and two individuals from parkrun’s Mother England.

A few more degrees would have been ideal, but then again for early February, nobody could claim disappointment with the above-freezing temperatures beneath clear skies that we enjoyed. Run Director Tyrone led a dedicated eight-person volunteer contingency that congregated afterward at the post-parkrun home of Hype Cafe to process results.

Michael Riegelman was our first finisher today in his 5th parkrun; all at Anacostia parkrun. Believe it or not his time of 19:43 was not a PB for the DC resident. 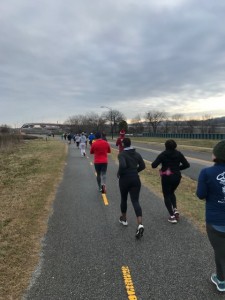 It was a classic, bright, dry, crisp February morning at the fastest parkrun in the DMV. A dozen members of the Lincoln Park Track Club comprised the backbone of 49 finishers on the Anacostia Riverwalk Trail alongside the Mighty Anacostia River. 11 of the 49 finishers (22%!) recorded a new parkrun PB this morning.

Tourists included a couple from Belgium running their very first parkrun. The nation of Belgium is still without a parkrun, and a number of us encouraged/pestered them to consider taking steps to introduce parkrun to Belgium when they fly home later this week. Jennifer was run director leading a crew of 11 dedicated volunteers, most of whom made their way to Hype Cafe for the weekly post-parkrun social hour. 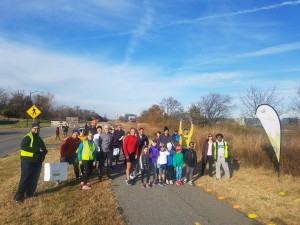 We enjoyed a beautiful day on the Saturday before Thanksgiving and a swell time with a bunch o' folk afterwards at Hype cafe! Isn't it interesting that for the last few Saturday's we've seen wild turkeys as we set up at the start, yet there were none to be found this week - a good time to be in hiding! We welcomed a visitor from Scotland and one of our parkrun first-timers was the first to finish - woo hoo. Thanks also for all of the volunteer help - keep it coming! - and we're slowly adopting the parkrun phone apps for timing and scanning - worked great for timing this week! Remember that you can join College Park and Kensington for a parkrun Thanksgiving morning. Enjoy your Holiday, and come back to Anacostia for our regular Saturday morning run this Saturday! Members of the Lincoln Park Track Club will be helping.

A BEAUTIFUL fall day on the Mighty Anacostia where 40 folk enjoyed lovely walks and runs at parkrun Anacostia. We welcomed new participants and celebrated a few PBs including a regular on her first 5K in 4 months after being sidelined with an injury, plus another 10th run anniversary within the Lincoln Park Track Club! Mostly it was a really lovely day made all the more enjoyable shared with others - with a particular Shout Out of thanks to our on-the-spot volunteers: token distributor, timer + processor!, and tail walker - plus offers of additional help from others! parkrun doesn't happen without...YOU! Thanks to all for your ongoing willingness to participate - it's easy. 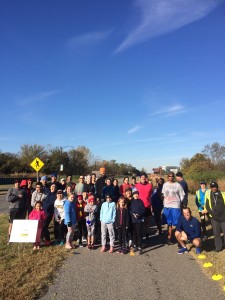